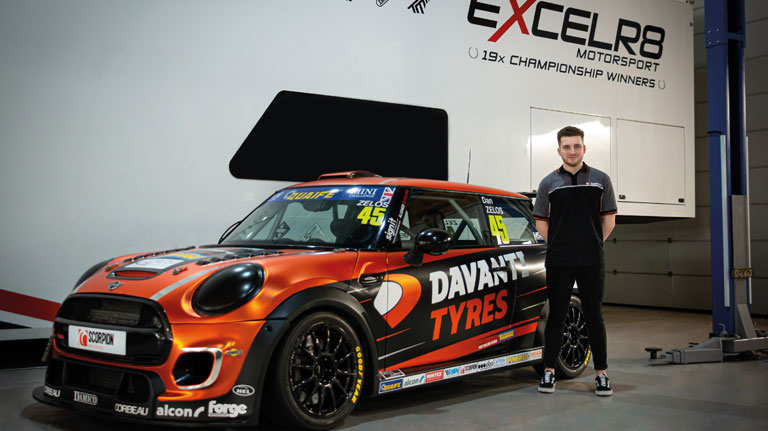 With a new season come new challenges, new opportunities, new motivation and – for Dan Zelos in 2020 – new colours, as the talented Norfolk ace aims to be ‘Leading the Way’ in the fiercely-disputed MINI CHALLENGE with the support of Davanti Tyres.

One of the most highly-rated young prospects on the British motor racing scene, Zelos lifted the MINI CHALLENGE ‘Rookie Cup’ laurels at his first attempt last year. Not only that, but two race wins, nine podium finishes, three pole positions and four fastest laps behind the wheel of his potent 275bhp hot hatch fired him to an excellent third place overall amongst the 29 protagonists in the headlining JCW class.

Second time round, the Dereham-based hotshot has just one thing on his mind – outright title glory. What’s more, that prize will carry even greater prestige in 2020 as the MINI CHALLENGE joins the support package to the UK’s premier motorsport series – the ultra-popular, all-action British Touring Car Championship.

That means Zelos will be showcasing his skills to some 20 million television viewers live on ITV4 and more than 300,000 trackside spectators over the course of the campaign – and he will do so proudly sporting Davanti colours, replacing loyal long-term sponsor Evergreen Tyres alongside returning supporter CAM Systems. The partnership was announced during a Davanti conference at Everton F.C.’s Goodison Park ground in Liverpool last weekend.

Founded in 2015, Davanti is fast gaining a strong foothold in both the UK and wider global tyre market, with the objective of delivering premium performance to the mid-range customer. The company’s strapline – ‘Leading the Way’ – is something that resonates strongly with former Norwich University of Arts and Dereham Sixth Form College student Zelos, who is keen to show his rivals a clean pair of wheels on the track this season.

“I’m delighted to have Davanti on-board with me,” enthused the East Anglian, who earlier this year was unveiled as a British Racing Drivers’ Club (BRDC) Rising Star. “They are a young brand with an ambitious outlook and we share a lot of common values.

“Davanti are extremely proactive in their approach and already have some great ideas about the kind of activation they’d like to pursue, which is really exciting, and their mantra of ‘Leading the Way’ is exactly what we intend to do in 2020.

“At the same time, I really want to thank Evergreen Tyres for the past six years. They have been a fantastic partner and there is no question that I would not be where I am now without their support. That said, I’m constantly looking to evolve as a driver and find different ways to maximise my potential, and the time feels right for a fresh start and new experiences.

“With the MINI CHALLENGE joining the BTCC calendar, the series has attracted a lot of attention and the competition is clearly going to be extremely tough this year, but after being right in the mix for the overall title last season, we can only have one goal going forward. I’m feeling confident and I can’t wait to get out on-track with Davanti and Excelr8 Motorsport and show just what we can do!”

For that, Zelos will not have to wait long, with the forthcoming 16-race campaign set to rev into life at Donington Park on 28/29 March. Davanti’s Sales Manager for the UK and Ireland, Sean Maddocks, explained that the 21-year-old’s recruitment was a real coup.

“We are thrilled that Dan has joined the Davanti Tyres family,” he reflected. “For a British brand, supporting a young driver acknowledged by the BRDC as a Rising Star and with the potential to be a national champion is a fantastic opportunity. After last year’s impressive performance, we have high hopes for Dan this year. We’re confident that by the end of the season, he will be ‘Leading the Way’!”