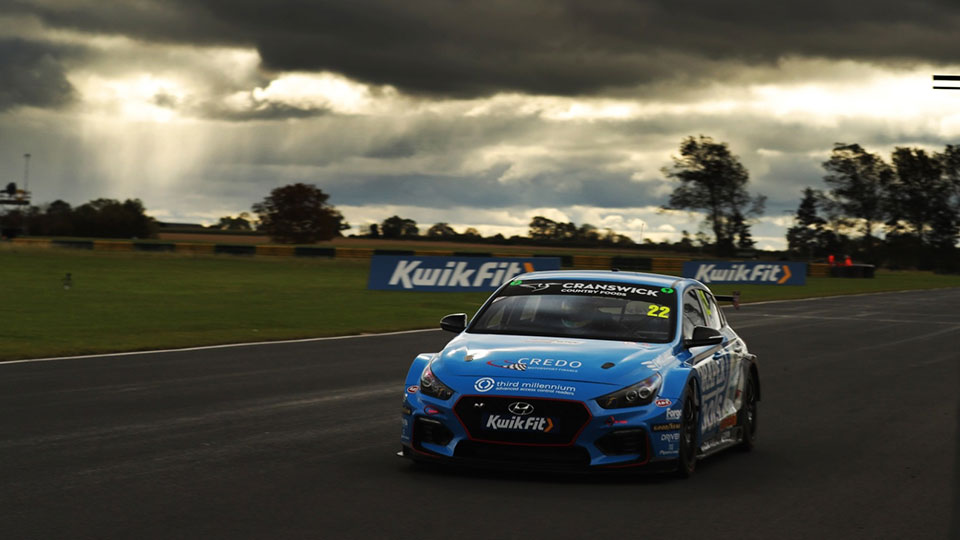 Two top ten finishes remunerated the EXCELR8 Motorsport team at the end of mixed weather Croft weekend in the British Touring Car Championship. Both drivers had the discernible accolade of gaining a place at the start of every race and it was this forward flying mentality the propelled both cars to multiple points finishes.

An unfortunate Saturday in the damp Yorkshire countryside was made up for on Sunday as local hero Senna Proctor recovered from the back of the grid for two sensational top ten finishes for the Purple-dot-sponsored Hyundai i30 Fastback N Performance machines.

Chris Smiley led the team during the opening race and would have been on course for a triple points finish had it not been for contact with another car in the final race of the day. Meanwhile, Proctor’s patience ensured the team leaves Croft fifth in the Independent teams’ standings, closing to within three points of TripleR Racing.

A cool 10°C morning welcomed the Draper Tools-sponsored pair on Saturday, as the team shook down their car on another new circuit for the Hyundai. The rain made a brief appearance during second practice, though this did not prevent both from improving. Chris Smiley was the fastest of the two in thirteenth during first practice, with Senna Proctor also thirteenth as he led the duo in the second session, focusing on a strong qualifying set up.

Qualifying would see a damp and dreary affair for all those involved, with both drivers needing to call upon their vast experience in the tricky conditions. Proctor was challenging for a top twelve result throughout, though surpassed all expectation taking provisional pole with 8 minutes to run.

Proctor remained on pole as the first red flag was called. A second red flag caused by the second Infiniti saw the track dry up for a final 10 minute sprint, though Proctor held on for second, just 0.100 seconds behind Josh Cook (BTC Racing). Unfortunately, a technical irregularity saw his efforts deleted. Smiley meanwhile was unable to better his fifteenth in the slippery conditions, promoted after penalties.

Both drivers knew forward momentum was key with the Hyundai’s gaining an incredible 10 places on the opening lap. Proctor had contributed six of those place gains and working with championship contender Tom Ingram (Toyota Gazoo Racing) was weaving his way up the order, ballast free.

Smiley meanwhile had made it into the top ten, utilising the front-wheel drive advantage in the damp conditions. As the race wore on, the manufacturers fought back with Smiley, putting in a superb defensive display to cross the line in twelfth overall.

From the back, Proctor proved his pace throughout the 15 laps, leaping seven places to cross the line in 18th for the #18, having used the best of his tyres in the earlier stages.

For the second time in as many races, Proctor gained six places on the opening lap, remaining out of trouble as teammate Smiley continued the momentum by himself leaping two places, putting them both in the fight for the top ten.

Working together, the Evolution-sponsored Hyundai’s gradually caught the fraught battle for top ten glory. Smiley though was hit by Aiden Moffat (Laser Tools Racing) into the hairpin, dropping him to the tail of the points.

Proctor though was not to be deterred, working his way past Adam Morgan (Triple R Racing), nursing light damage to record a fantastic ninth place finish, gaining nine places from his starting position. Smiley equally

Proctor and Smiley continued their record of gaining places on the opening lap, utilising his front-wheel-drive grip to zoom up to eighth. A safety car to retrieve Bobby Thompson (GKR TradePriceCars) allowed both drivers to breath as they occupied the top ten.

In contention for an Independents podium Proctor immediately went on the attack, hounding race one and two winner Josh Cook as Smiley did the same to Aiden Moffat. Though like in race two, Moffat muscled him wide, before contact with Rory Butcher (Motorbase Performance) cost the #22 a top ten and points finish.

As the race entered its closing stages, Proctor had to defend from the now-charging Moffat. The Yorkshire racer would do his team proud, holding off the Infiniti for his second top ten of the weekend, an incredible result after his qualifying disappointment.

“It was great to see both our drivers making such substantial progress on the opening laps of the Sunday races. We were obviously deeply disappointed to have lost the potential front-row start in Qualifying though Proctor put in a fantastic effort at his home circuit to come away with two top ten finishes.

Equally, we’re delighted with the progress Smiley made this weekend, picking up a double points finish and proving that both Hyundai’s have the capability to battle for top ten results. We hope to use this weekend to develop the car over the next two weeks to get us ready for Snetterton.”

“It’s great to be picking up two top tens again, especially at Croft my home circuit. Saturday was unfortunate, but I hope I did the team proud; they did a fantastic job in setting the car up for us to move forward.”

The #22 Hyundai of Chris Smiley, said;

“I’m happy with the points finishes. Unfortunately, Butcher fired me off in race three, which didn’t do me any favours at the end. It could have been worse and bringing the car home in one piece was important, but we’ll work on the car and get fired up for the next one.”

The next British Touring Car Championship race is at Snetterton on 24-25th October 2020.