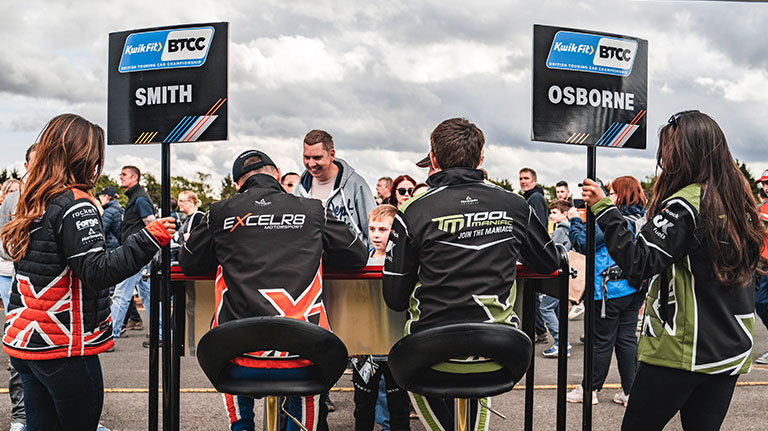 EXCELR8 Motorsport will take the positives out of an otherwise difficult British Touring Car Championship weekend at Croft, during which the team learned valuable lessons and showed impressive resilience.

The trip north to Croft was always going to be a difficult one for the team, which had no previous on-track experience of the Darlington circuit prior to the start of running on Saturday, with both drivers Rob Smith and Sam Osborne up against it to hone their MG6 GTs to suit the challenging 2.1-mile track.

Matters were compounded when a regulation issue meant Smith was barred from taking part in the opening practice session. Regardless, the team concentrated on learning as much as it could from Osborne’s car.

Smith’s MG, which was rebuilt from a bare bodyshell following damage during the last round at Thruxton, rejoined for FP2 as the team focused on finding a solid setup ahead of what would be a weekend of difficult, changing conditions.

Qualifying was heavily disrupted by several stoppages, which limited the team’s programme. A combination of five red flags punctuated the session and prevented Smith and Osborne from putting in many meaningful laps. Osborne would start race one on Sunday from 23rd, with Smith a disappointed 25th, despite both drivers bettering the car’s best time from last year by over a second.

Things didn’t get any easier in the first race, with a rain shower soaking the track just before the grid formed up. With no further precipitation forecast, and knowing the circuit would become too dry for full wets after a handful of laps, both Osborne and Smith started on the hard-compound Dunlop slicks, which made the early laps incredibly difficult.

Smith survived a rallycross moment out of the hairpin early on, while Osborne was sent spinning out at the chicane when he tried to catch a huge slide while getting on the power for the back straight.

The incidents cost time, but the race would soon take a turn in EXCELR8’s favour as damage accounted for those ahead. Rob Collard’s stranded Vauxhall at Sunny Out summoned a safety car and, with damage and flailing bodywork being an issue of many others, Smith’s MG was elevated to 22nd at the flag. Osborne would have followed him home, but was forced out with an alternator issue.

The team worked hard to rectify Osborne’s car ahead of race two, but an unforeseen battery issue caused his car to ground to a halt on the green flag lap, preventing him from taking the start. Smith battled on to 24th in the day’s only fully dry session.

The result meant both cars should have started the final race on the favoured and faster softer-compound Dunlops, but another heavy shower shortly before the last race led to mixed tyre strategies up and down the grid. Both MGs took wet rubber, while several of its rivals gambled on slicks. With the race starting in bright sunshine, but on a soaked track with visible standing water, it could have gone either way.

Both Smith and Osborne – his car now fully repaired – made strong early progress on their wets, as the slick-shod cars struggled for grip early on. Smith climbed to 18th and was well in the fight for what could have been the team’s first points-paying finish. But, with the circuit drying toward the end, he suffered an off at Tower while battling with championship front-runner Tom Ingram’s Toyota and dropped back. He followed Osborne to the flag as the MGs took 21st and 22nd places respectively.

While results may not have gone the team’s way, EXCELR8 has unquestionably shown that it is whittling away the gap to the front, and getting closer to the ultimate pace of the BTCC field as it continues to grow in both knowledge and stature.

Rob Smith said: “It was a tricky weekend, but it was always going to be. Croft is a circuit that I don’t really know that well and obviously I was limited from the start by missing FP1, and then we had the general weather trouble… But the team have done an amazing job to get the car sorted after the damage from Thruxton. We made some good progress this weekend and the car in race two was about as comfortable as I’ve been so far this year. Let’s just hope for a more normal weekend at Oulton Park.”

Sam Osborne said: “This weekend certainly had its ups and downs. But we did pretty well in general and we learned a hell of a lot. We’ve been making a lot of setup changes and we’re progressing in the right direction in general. I’m also learning about the car’s handling and my car control each race. I’m getting more and more confident. The team worked so hard to get me back out for race three after we had the electrical issues. We changed the wiring loom, alternator and battery across the weekend, and the car felt great at the end.”

EXCELR8 team manager Oliver Shepherd added: “It was a mixed weekend, a lot of good points and a few undesirable ones. As a team we made a lot of progress and did some good work with both our drivers and, although the results don’t show much, we had some very good internal goals completed. The weather didn’t play our way and the issues with Sam’s car were less than ideal, but we pulled together and got on with the job, which was very encouraging. It just wasn’t our weekend for results. But we’ll take the positives and move on.”

Next up is the more familiar ground of Oulton Park on June 29/30, where the team will be keen to bounce back.