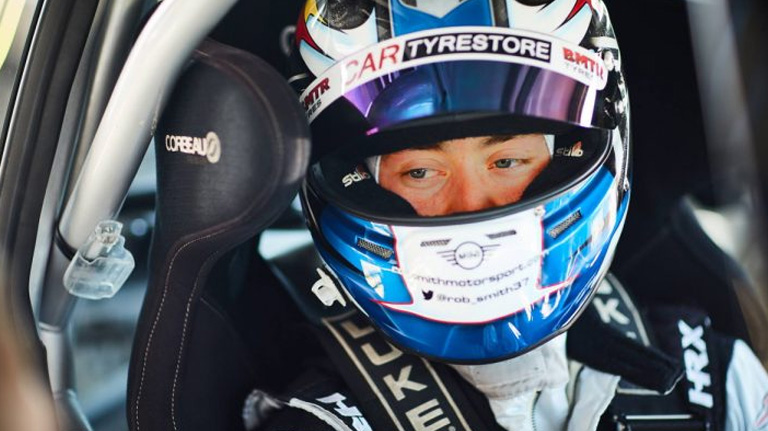 Kwik Fit British Touring Car Championship new boy Rob Smith has set his sights on consistent top ten finishes during his maiden campaign in the UK’s premier motorsport series, pointing to his and Excelr8 Motorsport’s longstanding pre-existing relationship as an early asset on his learning curve.

Smith arrives in the BTCC following four-and-a-half successful seasons in the MINI CHALLENGE, during which he registered seven victories, 16 further podiums and four top seven championship finishes in the headlining JCW class – peaking at fourth overall last year. The Shropshireman competed for Excelr8 throughout, which he hopes will give him a ‘head-start’ when he joins the grid at Brands Hatch on 6/7 April.

“Whilst we’re both new to the BTCC, the fact that the team and I know each other so well I think will really help – we both know how each other works and how to get the best out of each other,” he explained. “That means there’s no ‘settling-in period’ in that respect, which will hopefully give us a little bit of a head-start.

“With Excelr8, it’s much more a partnership than a customer and team relationship. We’re trying to use Speedworks as a template, with the aim of eventually growing from a small Independent team into championship contenders – and with the model we’ve got, I think we can achieve that.

“We’ve got a lot of talent inside this team, and some good people on-board with NGTC experience who I am sure will help to fast-track progress. It’s taken a tremendous effort to get to this point; I’ve been trying to break into the BTCC seriously since 2014, but all the ingredients have to fall into place simultaneously – work, luck and timing – and now they finally have.”

Smith is no stranger to the TOCA package, having spent two-and-a-half years in the Renault UK Clio Cup, outpacing the likes of Josh Cook and Mike Bushell to reach the rostrum in the 2014 curtain-raiser. He also tested a Power Maxed Racing Chevrolet Cruze just over two years ago, and is champing at the bit to get out on-track in the MG6 for the first time, with testing expected to commence midway through next month.

“I’d describe the MINI CHALLENGE as probably the best preparation I could possibly have had,” asserted the Telford-based ace. “As soon as I stepped into that car, it was like something instantly clicked, and that enabled me to feel comfortable straightaway when I tested the PMR Chevy.

“The BTCC obviously isn’t a one-make championship and the results don’t simply boil down to who is the best driver – so many other factors come into play. For both myself and the team, there will be a lot to learn – from the car to the tyres to set-up and ballast. The racecraft in the BTCC is unique, and then you’ve got the procedural side, which is completely different to anything I’ve experienced before. There are also a few circuits we’ve not visited for a few years, so there will be some re-learning to do there.

“We’ve been busy bringing some upgrades to the cars – they’re still in a thousand pieces at the moment – and I’m sure a degree of resilience will be required once we take to the circuit, but I’m confident we will be able to run consistently inside the top ten and I’ll certainly be disappointed if we’re not at least mid-grid.”