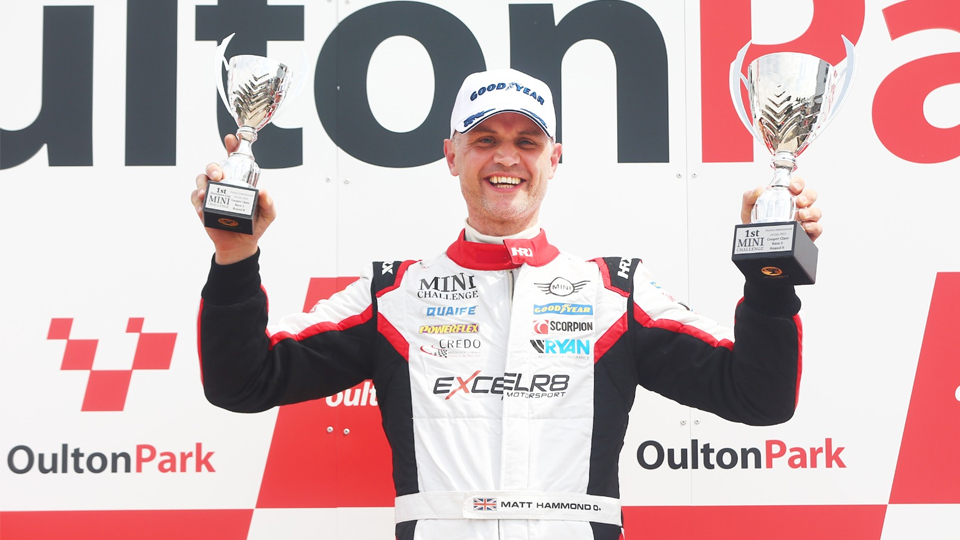 Matt Hammond enjoyed another lights-to-flag run in the opening race of the weekend at Oulton Park as he secured a fourth win of the Quaife MINI CHALLENGE Trophy season.

The championship leader had qualified on pole for the third time this year earlier in the day and when the lights went out for the start, it was the EXCELR8 man who led the field into turn one ahead of fellow front-row starter Charlie Mann.

Behind, Dominic Wheatley – Hammond’s closest rival in the standings – also got away well, with the PerformanceTek Racing driver making the most of his start to go around the outside of Nicky Taylor into turn one, with Taylor losing further ground to Louie Capozzoli over the course of the opening lap.

That opening lap would prove to be a challenge for a number of drivers further down the pack however, including Thruxton race winner Alex Solley.

Having started from the fourth row of the grid, Solley found himself on the outside as the field streamed round the left-hander at the bottom of Cascades and took a trip across the grass, damaging the bodywork on the front of his car and dropping him down the order.

Further dramas would follow heading through Island Bend and down to Shell Oils, with Nelson King putting a rear wheel on the grass and going into a spin that resulted in him then being hit by one of the following pack, putting him out on the spot.

Behind, Tom Ovenden was one of the drivers who took the grass in avoidance and also suffered a spin before rejoining at the back of the field, whilst Ricky Page also found himself running off track as he tried to avoid the dramas ahead and a car on the inside, leaving his car stranded in a dangerous position and bringing out the safety car.

The action would resumed on lap four with Hammond leading the field ahead of Mann, and the leading pair would remain relatively close right through the flag.

Mann managed to keep the championship leader honest for three laps after the restart, but Hammond would extend his advantage to six tenths of a second with a quick lap on lap six and successfully took the flag a lap later to take the win.

“I got a good start again and got a small gap but then the safety car came out,” Hammond said. “I thought I had got a good restart but the guys behind kept me honest and I could see there were places where I was stronger and places where Charlie was stronger.

“I pushed where I was stronger to pull away and I just had to make sure I did nothing silly. I’m glad the new car is doing its job.”

As well as keeping Hammond honest, Mann was able to break away from Wheatley in the final stages to secure second spot, which marked the first time that the second year driver had taken his place on the podium, having gone close a number of times over recent meetings.

“That was a good race for us and I tried to keep Matt honest but then made a small error that let him break away,” he said. “I couldn’t quite challenge for the win but the car doesn’t have a mark on it and we stayed out of trouble, so it’s been a good result.”

Wheatley’s move on Taylor at the start would prove to be the key one in the fight for third spot as he returned to the podium places after a tough weekend at Oulton Park last time out.

As well scoring strong points for his result, Wheatley also popped in the fastest lap of the race on the final tour to secure six valuable bonus points.

“Brands Hatch didn’t go our way last time out so it’s nice to come here to Oulton Park and convert a decent qualifying performance into a podium,” he said. “Getting the fastest lap at the end is a bonus as those extra points that you can collect are the ones that could prove to be vital when we get to the end of the season.”

Behind the top three, the fight for fourth spot would be more frenetic, with Capozzoli holding the place through to lap six when Taylor managed to get ahead at the hairpin.

Capozzoli fought back going into the final lap and there would be slight contact between the pair before Taylor suffered a momentary loss of power that allowed Capozzoli to get back ahead.

Lewis Saunders and Harry Nunn also nipped ahead of Taylor into fifth and sixth, with Alfie Glenie securing seventh.

Glenie had started the race in twelfth spot but was the major beneficiary of the lap one dramas as he jumped up into eighth spot, and then secured one extra spot from Taylor on the final lap. Taylor crossed the line just behind, with the top ten then completed by Josh Porter and Morgan Wroot.

Further down the order, Brands Hatch race winner Joe Wiggin had been one driver on a charge from 19th on the grid and was working his way towards the top ten when a braking issue saw him slip back to 16th.

Solley’s lap one excursion saw him end up back in 17th place whilst Ovenden took 24th, having lost ground on the restart when the car ahead dropped back from the train.

Race two will see Taylor start from pole after the top eight finishers were reversed.