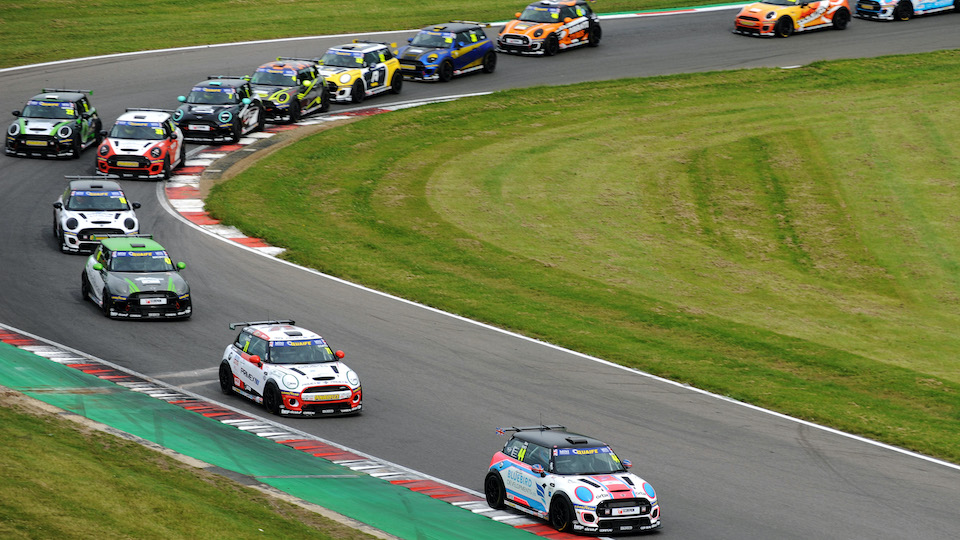 It’s all to play for in the Quaife MINI CHALLENGE as the series heads for Oulton Park this weekend for the third meeting of the campaign, with less than ten points separating the leading three drivers after the first six races of the year.

Five different drivers have tasted victory so far as the JCW field makes the trip north for what will be only its second appearance on Oulton Park’s Island layout – with most previous outings having come on the longer International circuit.

LDR Performance Tuning’s Lewis Brown held the early lead in the standings after a double win in the season opener at Snetterton, but he was overhauled in the points by Max Bird at Brands Hatch, with the EXCELR8 Motorsport driver having enjoyed a fine weekend in Kent last time out.

Bird scored pole for the second meeting in succession to earn six valuable bonus points and then converted it into victory in race one ahead of guesting team-mate Jack Mitchell. A second win almost followed in race two, with Bird leading until the start of the final lap before contact with Mitchell saw his race end in the Paddock Hill gravel.

An impressive recovery drive to eighth place in race three – making up a season-high 19 places in the process – meant that Bird came away from the weekend leading the standings once dropped scores are taken into account, with a lead of just five points over Brown.

He would prove to be unable to make it onto the podium around the short Brands Hatch Indy circuit and lost ground with a 13th place in race two after a trip through the gravel at Paddock Hill Bend.

Brown now has Dan Zelos breathing down his neck after he ended his victory drought in the series at Brands Hatch, taking a first win since 2019 in the third race of the weekend.

Zelos has now scored more points than anyone else this season before dropped scores are taken into account and has yet to finish lower than seventh; proving how consistency will be key over the course of the season.

Zelos has however struggled for pace in qualifying and that is something that he will keen to remedy this weekend in a bid to overhaul his rivals ahead in the standings.

The leading three drivers have established a small buffer over the chasing pack behind, which is currently headed by Hybrid Tune’s Sam Weller. Weller was one of the stars of the show at Snetterton in round one with a double podium finish, but he dropped away from the lead trio after a more challenging weekend at Brands Hatch yielded just one top ten finish.

Weller lies ten points clear of James MacIntyre after the LUX Motorsport driver raced to a double podium finish at Brands Hatch, with Max Coates and Jack Davidson just behind.

Coates had endured a weekend to forget at Snetterton in round one but he was back on form in Kent as he ran at the front throughout – finishing as best of the rest behind Bird and Mitchell in race one before taking victory in race two. That marked the first win at JCW level for Graves Motorsport in only its second weekend in the category, and fifth place in race three mean Coates has now vaulted up the standings into the top six.

Davidson meanwhile went from the back to the front – almost – at Brands Hatch, having been left with work to do when he was excluded from the results of qualifying for a technical infringement. Like team-mate MacIntyre however, he came good in the races as he battled his way forwards to end the weekend with a first podium finish of the season to sit in seventh spot; with hopes high of fighting for further silverware during the weekend ahead.

Snetterton winner Brad Hutchison lies in eighth place after a tricky weekend at Brands Hatch and sits level on points with Ronan Pearson with the Scot being one driver who has raced better than he has qualified so far this season.

An improved performance in Saturday’s qualifying session would go some way towards Pearson being able to challenge for a second podium of the season whilst tenth placed Isaac Smith will be ken to try and pick up silverware for the first time.

Smith has shown flashes of speed this season for JW Bird Motorsport but has only scored two top six finishes so far, with the reigning rookie champion hoping to try and break onto the podium.

Ethan Hammerton, Robbie Dalgleish and Jim Loukes are all within striking distance of the top ten, as it Kenan Dole after he enjoyed a noticeable upturn in fortune last time out.

Jason Lockwood meanwhile rounds out the top 15 in the standings and is another driver who will be hoping to kickstart his campaign in earnest this weekend having endured his fair share of bad luck in the two rounds to date.

In total, a 29 car field will be in action across this weekend’s two races, which will see the JCW field appearing in front of a full BTCC crowd for the first time following the easing of COVID-19 restrictions.

The opening 20 minute race is scheduled for 17:00 on Saturday and will benefit from live audio coverage on the BTCC website and app, with race two on Sunday at 13:30 airing live on ITV4.