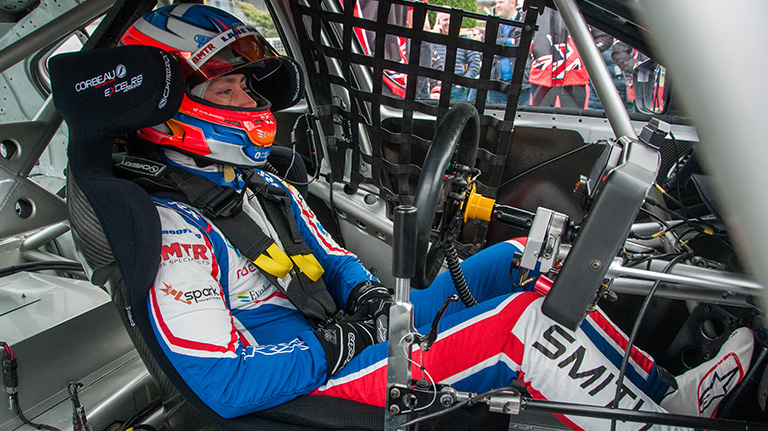 EXCELR8’s drivers – Rob Smith and Sam Osborne – head into the next round of the British Touring Car Championship keen to make their mark on familiar turf at Oulton Park.

The fifth round of the season, which marks the halfway point in the campaign, represents something of a return to the norm for both EXCELR8’s technical team and its drivers. Coming off the back of intensive learning experiences at unfamiliar tracks like Thruxton and Croft, Oulton should be a nice breather, with the squad already having extensive experience of the Cheshire track from other tin-top categories.

So far this year, EXCELR8 has made big inroads into understanding the setup and operation of its twin MG6 GTs, and several notable breakthroughs were made during the last round at Croft, even if they weren’t properly reflected in the results on a weekend hampered by changing weather.

For Oulton, the forecast suggests stable conditions for the entire weekend, meaning it could be the first time this year the team could test and race in the same track conditions. Smith will also be heading to his home circuit, while Osborne can also count Oulton as one of his closest venues meaning both drivers will also be boosted by support from their friends and families at the track.

Rob Smith says: “I’m really looking forward to Oulton Park, it’s back on familiar ground and out-and-out it’s my favourite circuit, so I’m feeling really good. We always knew Thruxton, Croft and Knockhill would be our three toughest rounds this year, so Oulton is a nice relief. But we made some great progress at Croft. During race two there the MG felt the best it has all season. We tried some different settings to make it more comfortable and, while it perhaps took a small step back in ultimate pace, it’s allowed me to take a big step forward in feeling and confidence. This weekend could well be our best chance yet to score points, but qualifying will be so important as overtaking can be tough at Oulton. Fingers crossed we can be in the hunt for the top 15.”

Sam Osborne says: “Oulton is a great circuit and I think it should be a good weekend for us. In recent rounds the feeling in the car has improved so much and since we restructured the technical side of things from Croft we made some really big steps and the car has come on leaps and bounds in terms of performance. The aim is to establish myself inside the top 20, and if I could sneak into the top 15 and score points that would be a dream, but we have to take it a step at a time. Oulton should be action packed as it’s a fast, flowing, technical track but there’s a few good places for an overtaking lunge or two around the lap.”

EXCELR8 team manager Oliver Shepherd adds: “Croft threw a fair few variables at us, including lots of mud… but we went into that round not expecting huge results and instead targeting internal progress in the team and we ticked all those boxes. The team worked really well together and it was a massive success in that respect. We’ve had no testing at Oulton in the MGs, but we do know the track well from series like the Mini Challenge, so we know the demands of the circuit to a point. We’ve got some really good things planned for the team infrastructure, so we’ll build on that and continue to learn about the cars. If we get all that right, the results and the driving bits will come.”

BTCC qualifying at Oulton Park is set for 15:20 on Saturday, with race one due to start at 12:20 on Sunday. All races will be broadcast live on ITV4 and live timing is available all weekend via tsl-timing.com.