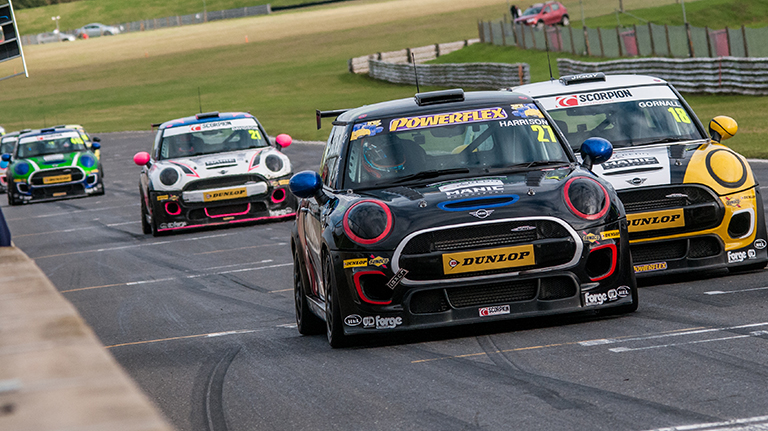 EXCELR8 Motorsport celebrated a near-perfect score during the final MINI CHALLENGE JCW round of 2019, with Nathan Harrison scorching to a double win in the season closer, but narrowly missing out on the championship title.

Harrison came into the final weekend trailing Gornall by 18 points, but put on a star show from the start, scorching to pole position in qualifying and then converting that to victory in the first race after fighting off the advances of Ben Palmer, who squeezed Gornall down to third at the flag.

That result halved the gap for Harrison, leaving him needing to outscore Gornall by nine points to take the title. Harrison did his upmost, pulling off a superb move around the outside of the Wilson hairpin to make up multiple places on the first lap to climb from seventh on the reversed grid to run second at the end of the first lap. He then dived past Jack Davidson to secure a second win. But, with Gornall also slipping past Davidson to run second, the bonus points available for fastest lap would prove the difference in the title chase. Harrison claimed the maximum of six with the top time on his penultimate tour, but Gornall improved to be second fastest, claiming five bonus points, ensuring he took the title by just two points.

Harrison had given it all, and arguably produced the performance of a champion over the weekend.

“Obviously losing the title in this way hurts, but there have been a huge amount of positives to take from the weekend, and the season,” said Harrison. “EXCELR8 did a great job with the car all year, and we’ve scored points in every single race this season, so reliability has been superb. In fact, without dropped scores I would have been 11 points ahead in the championship, which at least goes to show our consistency.

“At Snetterton the car was amazing. It took a while to come on in the first race, but when it did it was like a missile, allowing me to fight through and do the best I could. I couldn’t have done more – pole, two wins and a fastest lap. Those are still brilliant results.”

EXCELR8 did get to celebrate one title at Snetterton however, with Dan Zelos being officially crowned as Rookie Cup champion, despite a challenging weekend.

Zelos was also still in the battle for the outright crown, albeit an outside bet as he needed an even larger swing than Harrison to have a hope of outgunning Gornall. Zelos’s weekend got off to a tough start in qualifying, with him feeling he mistimed his run on the drying circuit with the chequered flag robbing him of what would have been his best lap at the end of the session. He would start eighth and with it all to do.

Zelos climbed to fourth in race one after a great, battling display, which kept his faint title hopes alive heading into the season finale. With nothing to lose, Zelos put on a charge in that last outing, until contact when fighting for the lead with Davidson at Coram sent the Evergreen Tyres-backed car spinning across the grass and down the order. Zelos would rejoin and battle back inside the top 10, before a further clash with Davidson would lead to his retirement due to broken steering.

It may have been a disappointing finale, but Zelos had done more than enough to put the Rookie Cup title beyond doubt, having won the class 11 times this term.

“Obviously, ending the weekend with damage and retirement isn’t ideal, but I still have to be pleased with what we’ve achieved this season,” said Zelos. “I came into this year looking to just treat it as a learning season ahead of the move to the TOCA package next season, but it’s been way more successful than we first expected. I was in the fight for the overall championship right until the final round and finish the year as the Rookie Cup champion, so I can’t not be pleased with that. EXCELR8 has done some great work on the car this year and really helped me get comfortable in the JCW. It’s been a great partnership so far, and I’m looking forward to seeing what 2020 brings.”