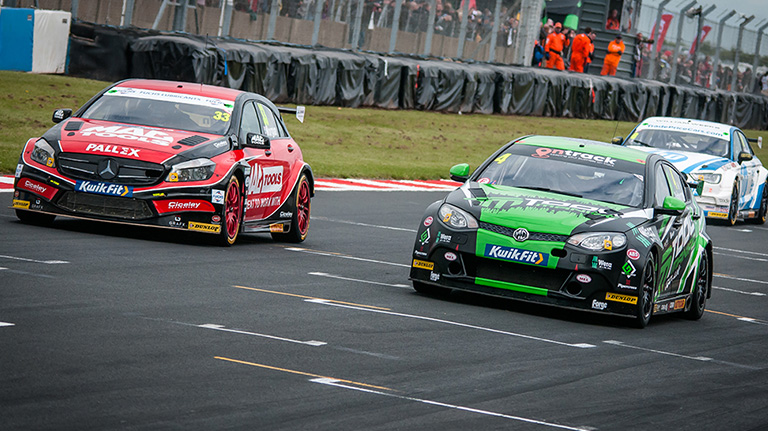 EXCELR8 Motorsport is gearing up to tackle the first of two flat-out thrashes around Thruxton, host of the next round of the Kwik Fit British Touring Car Championship this weekend.

The third round of the BTCC campaign takes place on Britain’s fastest circuit, where EXCELR8’s pair of MG6 GTs will regularly nudge average lap speeds of 110mph, and achieve even higher figures through some turns – such as the infamous Church corner, widely regarded as one of the greatest tests of bravery in UK motorsport.

Unlike other rounds, EXCELR8 heads to Hampshire this weekend with some knowledge of what the BTCC pecking order will be, having racked up just shy of 100 laps with its two cars during the BTCC’s annual tyre test at the venue back in April.

Thruxton is perhaps the most specialist venue on the calendar, combining high speed with two technical chicanes and a very abrasive surface. Usually BTCC teams have to nominate a different ‘option’ tyre for one of the races across a weekend, but during the Thruxton round all teams must run the hardest compound of Dunlop tyre, such are the forces exerted onto the cars by the circuit.

The BTCC will also hold a second event at Thruxton for the first time this season, with the field returning in August for round seven. That means a strong outing at the circuit this time around will surely set the tempo for the fixture later in the campaign.

Rob Smith, who narrowly missed out on scoring the team’s maiden BTCC points last time out at Donington Park, says: “Thruxton will be a tricky weekend as it’s a relatively new circuit for us and it’s also probably the most unique track on the calendar in terms of the high-speed challenge of it. If anywhere will highlight our lack of experience with the MGs, it will be Thruxton, so we’re in for a battle. The test day was very useful. I hadn’t been there for five years so getting my eye in again was important as it’s so easy to forget exactly how fast the track is. It’s a place you really need to be on top of the car, because one brake or lift through the second sector costs huge time as each corner flows into the next. Saturday morning will be so important to get the setup nailed down, and then we’ll just aim to keep it clean and bring the cars home.”

Sam Osborne says: “I know Thruxton pretty well, having raced there in both Renault Clios and Minis. It’s a great circuit and so, so fast. Having the test day there recently definitely helped us to acclimatise. My goal for the weekend is to be close to Rob, and there wasn’t much between the two cars time-wise during the test. The suspension changes we made at Donington really helped to settle the car down through high-speed corners, and that will be vital for Thruxton where it’s flat-out for a lot of the lap and the last thing you want is a car that’s unpredictable and hopping around. I’m confident I can go there and continue to improve and be in the mix.”

EXCELR8 team manager Oliver Shepherd adds: “This is probably the first time we’ve gone to a circuit knowing what to expect, having already had six BTCC races under our belts with the MGs and the official group test at Thruxton to draw on. We learned a few useful lessons from the test about how to set the cars up and get the drivers comfortable with the high-speed changes of direction Thruxton demands. We’re just looking to go out and do our own thing and continue to learn and progress. Plus, with a second round at Thruxton scheduled for August, this weekend will be another chance to further refine the MGs and give ourselves the best chance of fighting for points at one of the most demanding tracks on the calendar.”

Qualifying is scheduled for 15:05 on Saturday, May 18, with race one set to get underway at 12:10 on Sunday. All races will be screened live on ITV4 and live timing can be found on www.tsl-timing.com.