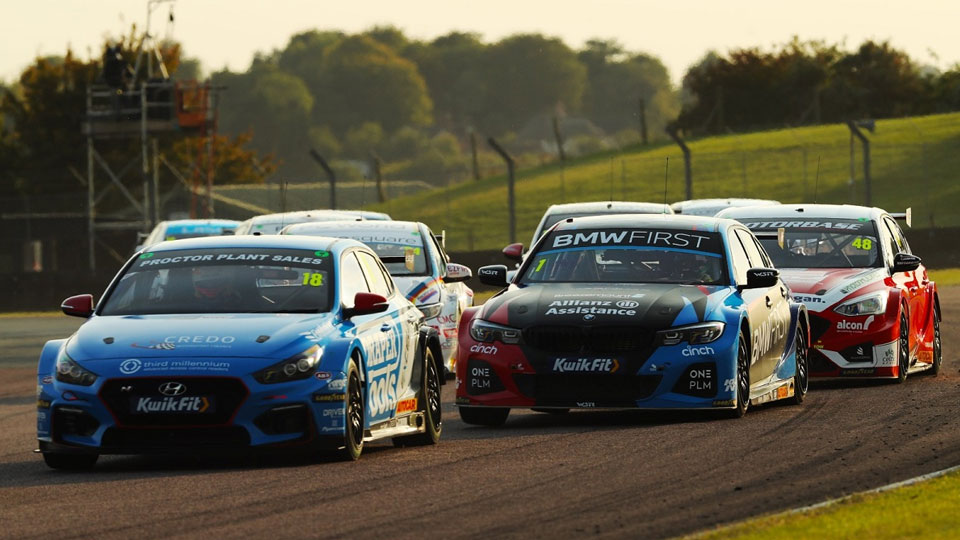 A challenging weekend for the EXCELR8 Motorsport team saw sparks of hope as both drivers demonstrated their pace on Saturday, with further points finishes aiding their championship fight.

Senna Proctor would lead the charge at Thruxton, battling for top ten positions throughout all three gruelling races on a circuit that requires excellent tow and dedication. Smiley equally displayed his courage in front of the adoring TV audience and local Draper Tools support.

Continuing his run of scoring points in every race he’s finished; Proctor expertly managed the Hyundai i30 Fastback N Performance that came into the weekend with no testing around one of the UK’s most unique venues. His best of tenth place a testament to the engineering ability and adaptability of the whole EXCELR8 team who started out blind.

Quick to showcase their pace around a brand new circuit for the Hyundai, both Senna Proctor and Chris Smiley set the opening lap times, showing their confidence in the EXCELR8 car. This early pace was replicated in FP2, with both drivers immediately beating their first session best as Proctor ran second quickest throughout much of the running.

Setting a best of 1:15.986, Proctor was second quickest and one of only four drivers under the 1min 16sec mark during both practices combined. Even Smiley’s time of 1:16.478 was incredibly impressive and proved the potential of the Draper Tools-sponsored drivers.

Getting a clean lap perfected during qualifying proved a challenge, as all 27 cars vied for spaces. Turbulent disruption denied Proctor and Smiley a return to perfection as less than a second gapped the top 15. Proctor improved on his practice best, setting a 1:15.951.

Only 0.002 seconds separated the pair, though Smiley was disappointed to have a late personal best deleted for track limits. The result though would see them qualify inside the top ten of the Independents on a circuit that the Hyundai has had no experience on prior to qualifying.

Teamwork was vital at a circuit where the slipstream was a real threat. Both Smiley and Proctor worked together, protecting their position on the opening lap and looking ahead to chase the top 10.

A spin for Jake Hill (MB Motorsport) and a technical problem for the championship leader gifted the pair two more places with Proctor leading the charge. As for Smiley, he was caught in the closing laps by the chasing pack, expertly holding off several challengers and unlucky to lose a position to Rob Austin (Power Maxed Racing) on the final lap.

The result temporarily moved Proctor up to ninth in the drivers’ standings as a result and was now free of ballast heading into the second race. Smiley equally continued his run of consistent point scores.

Not wishing to waste any time, Proctor was immediately involved in the battle for the lower top ten. Hounding the back of Michael Crees (BTC Racing) throughout, the Yorkshire driver simultaneously managed the pressure from Rob Austin for the second time on Sunday. After Adam Morgan (TripleR Racing with Mac Tools) was forced to retire, Proctor took his first top ten finish of the weekend rewarding the trust that EXCELR8 had invested in him.

Smiley was swamped on the opening two laps, unable to prove the Hyundai’s speed as he was muscled backwards out of the points and down to eighteenth. The Northern Irish driver would fight back to sixteenth but was unfortunate to miss out on a points finish.

Despite giving himself the best opportunity, Proctor would not benefit from the reverse grid in the same way he had at Knockhill, missing out on pole by two places. He started the final race tenth, with Smiley sixteenth.

Once again in a familiar position, Proctor battled the experienced returnee Rob Austin and his championship rival Jake Hill for a top ten result. The Evolution-sponsored Hyundai made a strong start, benefiting from an ailing Dan Cammish (Halfords Yuasa Racing).

Having started tenth, Proctor was carrying weight unlike his rivals, struggling to get the car up to speed out of the slow corners. Despite his best efforts, Proctor crossed the line 12th, continuing his record of scoring in every race he has finished this season. Proctor leaves Thruxton tenth in the overall standings and moves him up to fifth in the Independents.

It was an unfortunate end of the day for Chris Smiley, who was swamped in the opening lap, being barged down to 19th. Holding his head high, Smiley fought back, though had to settle for 16th, one position outside of the overall points.

Senna Proctor came away with another top ten to his name.

“I really enjoyed the racing today. Our race pace is really good, it’s just qualifying that we need to work on. I was pushing to bring home points today, we are still in the top ten of the championship and that’s the main goal. We’ve got to keep looking forward now and making progress.

“If we look forward now, keep pressing and see if we can get any higher, we definitely can move up. We’ve got some pace in the car, just need to extract it a little bit better to see how far we can get up the grid.

“We didn’t quite have the consistency of the front boys and I struggled a little all weekend with pace, however, we have a direction now for Silverstone and I expect to hit the ground running there.”

“It’s been a learning weekend and the results have been tough, but I’ll bounce back stronger, I don’t give up! If I had driven the car any harder this weekend, I could have ended up in the wall, so it’s better to bring it home in one piece and learn more about it.

“All things considered we were only a little bit off the pace setters. Good news is we picked up no damage, learned more about the car and have a few new tricks to try heading into the second half of the season. Once we’ve got the car sorted, I’m confident I can win races and so can that car. Thank you to all the sponsors that continue to support myself and EXCELR8 Motorsport.”

“The whole team must be proud of themselves this weekend. Coming to Thruxton with no experience of how to set up the brand-new Hyundai, they did a fantastic job to keep us in the points and even picking up a top ten finish.

“Thank you to all our sponsors for the support they have given us this weekend. It was fantastic to see the Hyundai i30 trailblazing around a unique and challenging circuit that gave us plenty to take away as we look to Silverstone.”