EXCELR8 back in the BTCC points at Silverstone 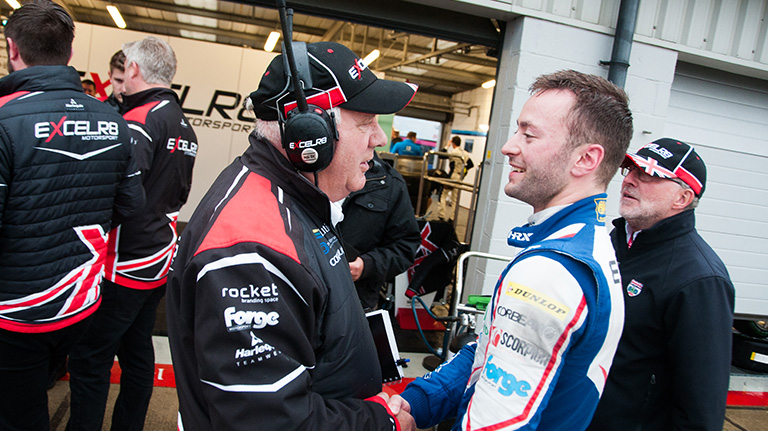 EXCELR8 back in the BTCC points at Silverstone

EXCELR8 Motorsport impressed during last weekend’s British Touring Car Championship round at Silverstone, with Rob Smith scoring the squad’s second points finish, and equalling its best result of the year.

The Silverstone weekend proved a tricky one for the team, with intermittent wet weather making last-moment strategy calls vital to success. Smith’s controlled drive in the murky conditions of race three was rewarded with 14th place, securing his maiden BTCC points, and doubling EXCELR8’s tally for the season.

Even though Silverstone’s National Circuit is one of the shorter tracks of the year – measuring just 1.6-miles and boasting just four corners – the track still demands a fine balance between straight-line pace and cornering performance. The team made several setup changes across both cars during the first free practice sessions, before settling on a happy medium for qualifying.

Both Smith and Osborne produced their best times of the weekend so far, cutting the deficit to pole to just one second. However, around such a short track, that would put Smith 29th and Osborne 30th, with both drivers knowing there would be more to come from both the cars and them.

Both Smith and Osborne went into Sunday’s races eyeing an improvement in both balance and pace but, with the race one grid forming up under threatening skies and light rain, the first outing would be anything but predictable.

Both Smith and Osborne opted to run on the medium-compound Dunlops, choosing to keep the faster soft rubber in reserve for later in the day. It proved to be a wise choice, with drama ahead helping both drivers pick up valuable places.

Smith started on the wetter side of the grid, and his slick tyres struggled for traction initially, meaning he dropped behind Osborne off the line. Running in formation, both of the EXCELR8 MGs moved up the order when Daniel Rowbottom came to grief on the opening lap, and then Michael Caine, Stephen Jelley and Mark Blundell tangled.

Soon, both Smith and Osborne were on the fringes of a top-20 finish, and a superb battle ensued with Carl Boardley’s Volkswagen. Smith attacked repeatedly, and then tried the cutback into Brooklands, but as Boardley defended, it opened the door for Osborne to nip past both to secure 21st, with Smith following him to the flag in 22nd.

Hopes were high ahead of race two, but luck deserted the team in what became a fraught, weather-afflicted outing. With several quick drivers starting immediately behind, both Osborne and Smith did well to defend their positions in the early stages, but Osborne’s hopes were dashed when he was hit by Stephen Jelley’s BMW on lap two and was forced to stop the car with steering damage.

That left Smith as the solo combatant, but he lost time having to serve a drive-through penalty for on out-of-position start. Despite the censure, Smith rejoined the fray just as the rain began to fall. Smith set some impressive lap times in the worsening conditions before opting to head back to the pits to fit wet-weather tyres in the hope of making a late charge. The sole MG was one of just two cars to take the gamble to stop for the correct rubber, and was therefore well placed to make progress over the closing quarter of the race. However, Smith never got the chance to show what he could do as the red flags brought an early end to the race as the conditions were judged too dangerous to continue with the vast majority of the field on slicks. Smith took the flag in 22nd.

Things finally came good in the third and final run of the weekend. Smith started back in 22nd, with Osborne 30th after his race two disappointment, but both cars soon made swift progress as the race began under intensifying rain, but with the track not quite ready for wet tyres.

Aided by the grippier soft tyres, Smith quickly made his way into the top 20 as Osborne also climbed multiple places on the opening lap. But the key moment came when the safety car was summoned to clear Matt Simpson’s crashed Honda. With the rain gradually increasing, Osborne was the first to stop for wets, but suffered from a stuck wheel pin that cost him time during the tyre change. Smith came in a lap later and got a clear stop, and immediately began to reel in the slick-shod cars after rejoining.

Smith made a series of well-judged overtakes on the likes of Adam Morgan, Stephen Jelley and Rob Collard before eventually dispatching Rory Butcher’s Honda to secure 14th spot at the flag – equalling Osborne’s points-paying finish at Snetterton back in August. Osborne put in a strong recovery from his delayed stop to cap the weekend with both MGs inside the top 20.

Rob Smith said: “I’m absolutely over the moon to finally be a BTCC points scorer… it took a while coming though! The weekend as a whole was a bit up and down, because we struggled to get the car into the right window for the conditions a few times, but things really came together in that last race. I knew we had a chance if we could get the tyre change done at the right moment, and after that it was about judging the grip and being brave. I had one big moment when I had to go around the outside of Caine at Luffield and was worried he’d wash wide and take us both out, but we held on. I was tempted to ask the team where I was in the order, but I’m glad I didn’t. It’s just a fantastic result.”

Sam Osborne added: “I’m a bit gutted about this weekend to be honest. I think we definitely could have had more in race three as I was matching the laptimes of Aiden Moffatt, who was fighting for the lead, but by that point I was a lap down after the slow stop. It’s one of those things. You can’t do much about it. But I’m happy for the team to be back in the points, and I’ll go away, reset and get back on it for Brands Hatch.”

EXCELR8 Team Manager Oliver Shepherd added: “I’m delighted for Rob, he drove brilliantly in that final outing, but we also have to feel sorry for Sam. We’ll look into the issue at the stop and make sure it doesn’t happen again. Aside from that it’s been a solid weekend. We probably should have started stronger, but we made progress forward in each of the races and it’s a shame they stopped race two early as we’d put ourselves in a good position with the change to wet tyres. But, as I said before the weekend, I was expecting our drivers to deliver at this round, and we leave with another points finish. I’d say that’s a success.”