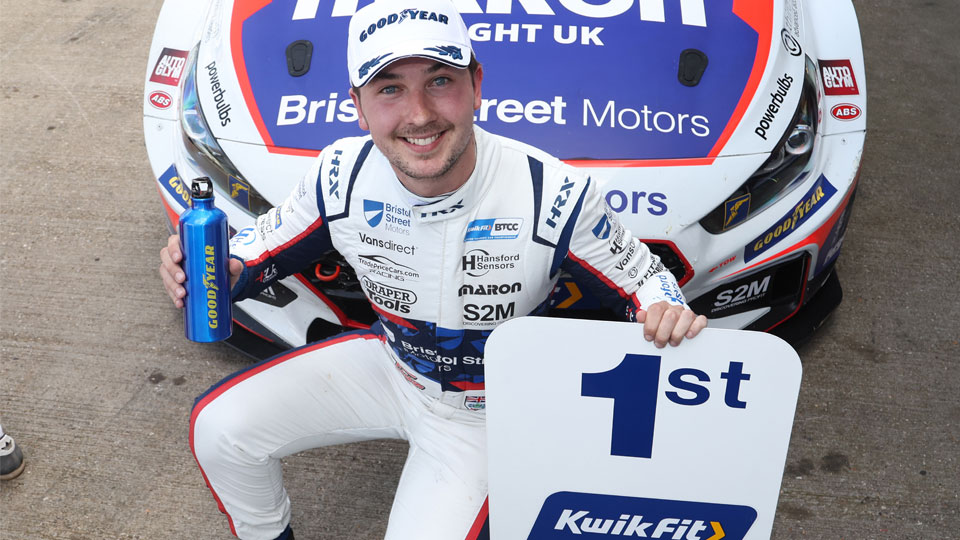 Bristol Street Motors with EXCELR8 TradePriceCars.com sits proudly on top of the Kwik Fit British Touring Car Championship standings after a race winning performance in the opening weekend of the new season at Donington Park.

The Suffolk-based team made the trip to the East Midlands circuit hoping to impress on the first weekend of the new hybrid era, which also marked the race debut for the Hyundai engine developed over the off-season alongside engine partner Swindon Powertrain.

The potential of the new package was shown in the opening practice session of the weekend, with Tom Ingram topping the times and Daniel Lloyd posting the fifth fastest lap. The pair would again run inside the top ten in FP2, with Tom Chilton and Jack Butel racking up the laps as the team prepared for qualifying.

A hugely competitive session saw Ingram qualify in fourth spot with a lap just 0.063s away from pole position, with Lloyd in twelfth after a damper issue hampered his challenge.

Chilton would be 15th on the timesheets despite his best time being only eight tenths of a second away from pole, whilst Butel put in his strongest session of the weekend to line up in 20th having almost matched his previous career best qualifying result.

Moving up to third place through the opening lap of race one, Ingram was able to make a decisive move for the lead on lap two at Coppice as he got ahead of Colin Turkington and Jake Hill in one swoop.

After a brief safety car period, Ingram made the ideal restart to control the race from the front and secured the first ever BTCC hybrid win, setting the fastest lap in the process.

Behind, Chilton enjoyed a strong opening lap to move up to the fringes of the top ten with Lloyd following behind as the pair became embroiled in the midfield battle. They would take the flag in tenth and eleventh, although there was disappointment for Butel when an electrical issue forced him out when running inside the top 20.

From pole in race two, Ingram led the early stages of the race despite now having fewer laps of hybrid available and was able to stay out front until Gordon Shedden’s Honda nipped ahead on lap ten. Ingram would pressure the Scot through the remainder of the race before taking the flag in second to add more solid points to his tally.

From eleventh on the grid, Lloyd was quickly making up places at the start to climb up to seventh spot and he would eventually cross the line in eighth to grab his first top ten finish of the campaign.

An exhaust issue on Chilton’s car saw him pushed off the grid and meant he would only join the race two laps down to finish back in 22nd spot, with further electrical gremlins resulting in Butel once again being forced into retirement.

The reverse grid final race saw Lloyd drawn on the front row of the grid and having slipped behind Ash Sutton, he settled into third spot with the Honda of Josh Cook behind. Despite Cook’s best efforts, a fine drive from Lloyd saw him hold onto the position until his rival sneaked ahead on the penultimate to leave him to cross the line in fourth.

From P8 at the start, Ingram made the most of the pace in the Hyundai to fight his way forwards to fifth place, whilst Butel picked up his first finish of the campaign as he worked his way up to 21st.

Chilton however would be forced into retirement when he was the victim of heavy contact at the chicane which broke the front left upright and left him to drag the car into the pits.

At the end of the weekend, Ingram heads the championship standings with Lloyd in eighth spot, whilst EXCELR8 Motorsport heads the Manufacturers’/Constructors title ahead of Motorbase Performance and West Surrey Racing.

Bristol Street Motors with EXCELR8 TradePriceCars.com also leads the way in the Teams’ Championship, with an early 16 point advantage to take into round two at Brands Hatch.

Tom Chilton, #3, said:
“I think my weekend would have been a lot different without the issue at the start of race two, as I think we would have been right in the mix for the reverse grid with Dan and could have up at the front. It obviously just wasn’t meant to be for me this weekend as in race three, I got fired into so hard at the chicane that it ripped the front left off.

“We could have come away from the weekend with a podium finish rather than a best finish of tenth, but saying that, the potential in the team is huge and Tom showed how fast the car is. I’ve found more this weekend in terms of getting the car how I like it, and it leaves me excited about the meetings to come.”

Tom Ingram, #80, said:
“It’s been a great weekend and to come away with a win, second place and fifth is a really strong start to the year. If I’m being honest, I don’t think we had the quickest car this weekend and we certainly can’t rest on our laurels, but we leave Donington Park in a solid place and knowing that we have done a good job.

“The results have obviously helped, but I’ve really enjoyed using the hybrid this weekend as I felt more in control of my own destiny with it. In the past, it has been tough to get a good result in race one but then know that the ballast and option tyres would mean you dropped back, whereas today we have been able to consistently fight at the front.”

Jack Butel, #96, said:
“It was always going to be a tough weekend after my lack of running in pre-season and it was only really in qualifying where I got a proper run in the car with everything working as it should have done, so I was pleased to get into the top 20.

“It’s a shame that the electrical issues have hampered race day but in the final race I was able to climb up to 21st and there are plenty of positives that I can take away from here. The team has done a great job as usual, and I look to forward to getting back to where we should be when we get to Brands Hatch.”

Daniel Lloyd, #123, said:
“Like a lot of drivers, we’ve had a few little problems that we have had to deal with this weekend but we can see that the pace is there is the car and all things considered, I think it’s been a good effort. We’ve put a solid haul of points on the board and ended the weekend on a high with the result in race three, where I think we put on a good show for the fans and my sponsors.

“The hybrid system means a different approach to the racing and it made things a lot more tactical, especially in the final race when I didn’t have as many laps of hybrid power available. We’re learning all the time and there is still room for improvement, but this is a good start.”

Justina Williams, Team Owner, said:
“It’s fantastic for us to be leaving Donington Park on top of the championship standings and has given us a really strong platform on which to build. Tom Ingram did a fantastic job to get the win in race one and it’s a proud moment for us as a team to secure a place in the history books as the first winners of the hybrid era.

“Daniel’s drive in race three was also very impressive considering the huge pressure he was under and it was unfortunate that he didn’t manage to get the podium finish he deserved. Tom Chilton and Jack have been unlucky in terms of their results but we know what they are capable of, and I’m confident that both will have improved fortunes when we get to Brands Hatch.”