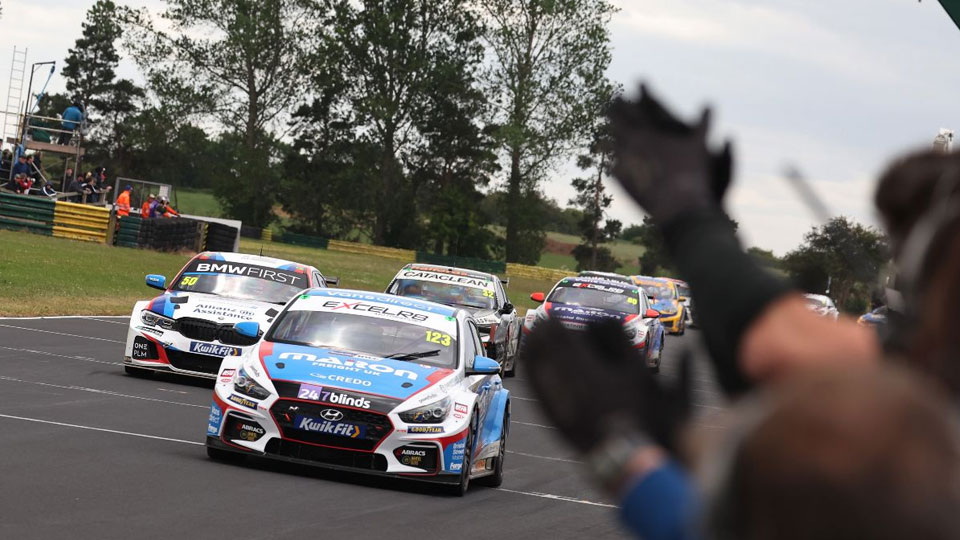 Bristol Street Motors with EXCELR8 TradePriceCars.com will seek to retain its position as the team to beat in the Kwik Fit British Touring Car Championship when the 2022 season resumes this weekend at Knockhill.

Ingram currently sits three points clear at the top of the standings after an impressive campaign to date that has seen him take three wins at the wheel of the #80 Hyundai i30 Fastback N – including the first ever win of the BTCC’s new hybrid era.

The two-time Independent champion is a past winner at Knockhill, including last season when he stormed to the top step of the podium in the final race of the weekend.

Ingram heads into the weekend buoyed by a solid showing in the two-day Goodyear tyre test held during the summer break and he goes into round six optimistic about his chances of another strong performance on track as he seeks to retain his points lead.

Daniel Lloyd strengthened his top ten championship position with a stunning performance on track at Croft prior to the summer break, where he romped to a pair of race wins.

Those wins came just two weeks after one of the biggest accidents of his career at Oulton Park, and allowed Daniel to move into the top eight in the standings – only a handful of points away from the top six.

Although he has only visited Knockhill twice in the BTCC, Daniel has won at the circuit in other championships and will hope to once again run towards the sharp end of the grid to maintain the strong for he has displayed to date so far in 2022.

Tom Chilton also enjoyed his best weekend of the campaign at Croft, where he battled his way to three solid top ten finishes.

That marked an upturn in fortunes for the former World Touring Car Championship racer after a difficult start to the season, with the multiple race winner then enjoying a productive test at Snetterton during the summer.

Now feeling more at home in the Hyundai after a series of changes designed to suit his driving style, Tom will be keen to try and push for three more strong top ten results at circuit where he too has been victorious in the past.

Having been forced to miss the last meeting for personal reasons, Jersey racer Jack Butel returns to action this weekend looking to break into the points for the first time this season.

Although he has picked up four top 20 finishes so far, Jack has endured his fair share of misfortune during the campaign to date but has fond memories of Knockhill after a strong showing twelve months ago saw him equal his best BTCC result to date.

A points scoring result this time around would be the ideal way for Jack to kickstart his campaign as he looks to make up ground in the Jack Sears Trophy, which is open to those drivers without an overall BTCC podium finish to their name.

Race action this weekend will once again be split between the main ITV channel and ITV4, with races one and two at 12:08 and 14:15 on ITV before race three rounds out a busy day of action on ITV4 at 17:10.

Tom Chilton, #3, said:
“I’m going into Knockhill and the second half of the season feeling confident on the back of my most competitive weekend of the year at Croft before the summer break. The three top ten finishes there were just what I needed and showed we are taking steps in the right direction, and the goal this weekend is to build on that progress and continue to work our way forwards.

“The two day test at Snetterton was also important because there were a lot of things that we were able to try out, and with the things we were able to learn, I’m excited to see what we can achieve at one of my favourite circuits on the calendar.

“The fact we have maximum hybrid is something that I think will be beneficial when it comes to qualifying given the nature of the circuit, and hopefully we can put in a strong showing on Saturday to set us up for a good haul of points on Sunday.”

Tom Ingram, #80, said:
“Knockhill is a circuit where I’ve enjoyed strong results in the past, including last season, so I’m going there feeling confident about our chances. There are various things that we were able to learn in the test at Snetterton that mean we head to Scotland in good shape, although I’m sure there will be other people who will say the same thing.

“The impact of the hybrid hasn’t been as a big as the impact of ballast in qualifying, which has allowed us to pick up some strong results on Saturday which then translates into strong results on Sunday. Hopefully the same will be true this weekend given how tight and twisty Knockhill is, but the weather is something that could play a part in how things pan out.

“Currently, it looks like it could be raining which would bring extra risks, but whether it is wet or dry, I’m confident we will be quick. I’m 100 per cent sure we can win for the second year in a row, but the focus is on maximising the weekend as a whole and putting as many points on the board as we can for the championship.”

Jack Butel, #96, said:
“There is no doubting the fact that it’s been a tough year for me so far, but I’m putting the first half of 2022 behind me and looking at Knockhill as a fresh start. The focus from now on is to finish the year as strongly as possible, and three solid results this weekend would be a good way to start that.

“Knockhill is a circuit that seems to suit my driving style and it was where we had one of our strongest race performances last year, so I know I’m going there with a good package underneath me.

“Having not taken part in the Snetterton test, it’s been a while since I was in the car but I’m hopeful of hitting the ground running when we head out for practice on Saturday. I really want to try and my first points of the year on the board, and will be working hard with the team to reach that goal.”

Daniel Lloyd, #123, said:
“My confidence is on a real high after the results we picked up at Croft prior to the summer break, which was the ideal way to bounce back from the drama of Oulton Park. Although I only took part in a single day of the test at Snetterton and we had a few issues to contend with, we were also able to complete some very positive work that I think will benefit us going forwards as I look to climb up the points.

“Obviously it would be great if we could go out on track this weekend and repeat the results from Croft, but I have to be realistic and know that it won’t be an easy thing to do when the field is as strong as it is this season.

“However, the car was a winner at Knockhill last season, so I’m confident that we’ll be right up at the sharp end from the start of the weekend and can look to fight for strong results on race day.”

Justina Williams, Team Owner, said:
“We’ve had a brilliant season so far, and after a brief opportunity to recharge the batteries during the summer break, we’re ready to come out fighting this weekend at Knockhill.

“It’s a circuit where we performed well last season, and that gives us a lot of confidence when you look at how the Hyundai has improved at the circuits we have visited so far. It’s also a circuit where all four drivers have showed strong form in the past and with the benefit of the Snetterton test and the information we were able to collect there, I’m optimistic that we can kick off the second half of 2022 on a high.”