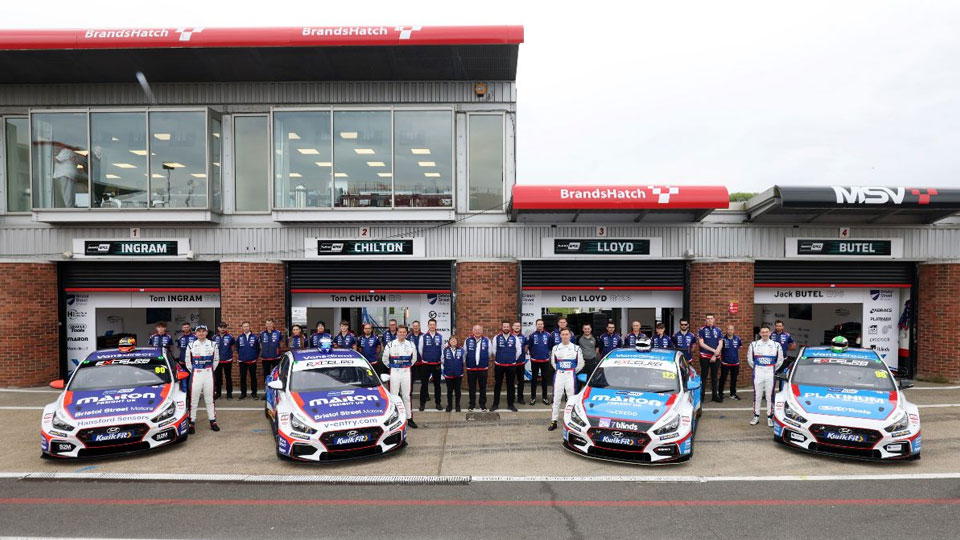 Bristol Street Motors with EXCELR8 TradePriceCars.com will look to maintain its position at the head of the Kwik Fit British Touring Car Championship standings when the series heads for Thruxton this weekend.

The fastest circuit on the calendar plays host to the third round of the 2022 campaign, with the Suffolk-based team making the trip to Hampshire sitting top of both the Manufacturers’/Constructors’ Championship and the Teams’ Championship.

Tom Ingram also sits proudly on top of the Drivers’ Championship after the opening two meetings of the year, which included the first win of the BTCC’s hybrid era at Brands Hatch and two further podium finishes.

Ingram is a two-time winner at Thruxton, and scored a podium finish in the opening rounds last year on what was his first outing at the wheel of the Hyundai i30 Fastback N.

Having shown top four pace in official testing at the circuit last month, Ingram will seek to maintain the strong form shown thus far in 2022, with his focus on trying to retain his early points lead.

Daniel Lloyd’s solid start to the campaign continued at Brands Hatch, where he fought back from hybrid issues in qualifying to maintain his 100 per cent scoring record this season.

Lloyd sits tenth in the championship standings going into the weekend, and will be looking to try and challenge for his first silverware of the campaign, having gone close on his debut with the team at Donington Park.

Like Ingram, Lloyd showed top ten pace during the Thruxton test, and returns this weekend having worked hard across the opening two meetings to get the #123 Hyundai better suited to his driving style.

Tom Chilton suffered mixed fortunes for the second successive meeting at Brands Hatch with an unfortunate retirement in the final race having prevented him from fighting for a second top ten finish of the campaign.

Chilton – one of the most experienced drivers on the grid this season – has secured multiple podium finishes at Thruxton in the past, and grabbed three points finishes at the circuit last year.

Keen to show his true potential at the wheel of the #3 Hyundai, Chilton will seek to make the most of the pace in the car to challenge for a strong haul of points and gain ground in the championship standings.

Thruxton marks the closest thing to a home event for Jersey-based racer Jack Butel, who heads into the weekend on the back of a hat-trick of top twenty finishes at Brands Hatch.

A relatively trouble-free meeting in Kent provided Butel with the chance to get some meaningful running under his belt in the #96 Hyundai, after a tricky pre-season testing programme was followed by technical issues in the Donington Park opener that left him unable to show his potential on track.

Having taken a double points score at Thruxton last year to secure victory in the Jack Sears Trophy, Butel has his sights on opening his account for the season this time around whilst also moving up the Jack Sears standings.

Tom Chilton, #3, said:
“There is no doubting the fact it’s been a tough start to the season, but the team has worked hard to sort a few things on my car, and I’m confident that it means we’ll be able to hit the ground running this weekend.

“Although I’ve been on the podium before, Thruxton is the only circuit that we visit where I have yet to take a race win, and that is something that I really want to try and put right this season.

“That might be a challenge against the rear-wheel drive cars if the weather conditions are dry, but the potential for things to be a bit mixed could work in our favour. Either way, I’ll be pushing as hard as I can to get some good points on the board and hopefully challenge for some silverware.”

Tom Ingram, #80, said:
“I feel we are in good shape going into the weekend as we had a solid run in testing at Thruxton, and we showed strong pace last season to score a podium finish on my first outing in the car. Since then, we have improved the Hyundai substantially, so I’m feeling pumped up and ready for the challenge.

“As with both Donington Park and Brands Hatch, we’re taking a bit of a step into the unknown when it comes to the hybrid system and I think we might see people deploying it in a slightly different way at Thruxton given the speeds are so much higher.

“Although we all tested at Thruxton, we need to wait and see how people perform when the chips are down, but the aim for me is to just focus on ourselves and make sure that we do the best job possible across the weekend. Do that, and I’m confident we’ll be in the mix.”

Jack Butel, #96, said:
“After a really tough weekend at Donington Park, it was good to have a relatively trouble-free outing at Brands Hatch and I was able to learn a lot about the car with the hybrid in place.

“In the wet conditions on race day, our pace was really strong and it was just unfortunate that we were out of a position after a tricky qualifying session as that prevented us from trying to push for some points. We certainly had the pace in the car to have achieved that if we’d been higher up the grid at the start, and if I’d not then lost ground avoiding an incident in one of the later races.

“Although we had a difficult time in the Thruxton test last month, I’m taking a lot of confidence into the weekend and hope we can try and challenge for the points I know we are capable of scoring.”

Daniel Lloyd, #123, said:
“There have been a lot of positive things to take away from the opening two rounds of the season, but I haven’t really had luck on my side with a damper issue at Donington and then hybrid trouble at Brands Hatch affecting how my weekends have panned out.

“Despite that, we’ve put some solid points on the board and I know we are getting closer to finding the sweet spot with my car to allow me to challenge right at the front, which is where I know we can be.

“I’m feeling good about the weekend ahead and am looking forward to trying to challenge for some top results.”

Justina Williams, Team Owner, said:
“Thruxton was a strong circuit for us last season, and we return there this time around in a better position thanks to the continued hard work of the team to improve the car. The opening two rounds have shown how strong our package is with the new engine and the hybrid system in place, and it’s important that we keep pushing to maintain the high standards we have set so far.

“There have been some mixed results for our drivers for differing reasons so far this year, but I’m confident that all four can make an impression this weekend and we can fight hard to retain our position at the head of the championship standings.”