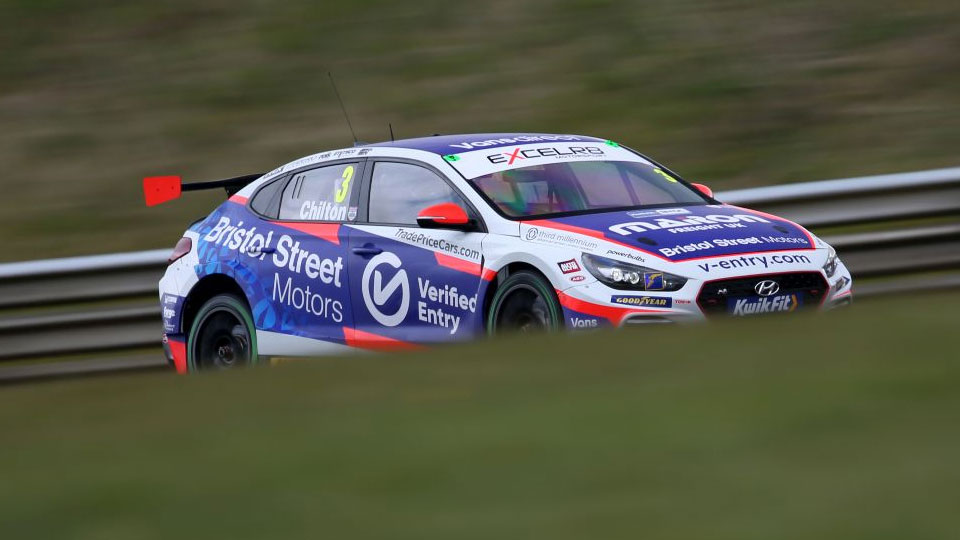 The Bristol Street Motors with EXCELR8 TradePriceCars.com team will embark on an exciting new era of competition this weekend when the 2022 Kwik Fit British Touring Car Championship bursts into life at Donington Park.

The season opener will be a weekend of firsts for the Suffolk-based team as it competes in Bristol Street Motors colours for the first time, whilst the East Midlands circuit will also mark the debut for both the team’s all-new Hyundai engine and the BTCC’s hybrid system.

With the new campaign starting slightly later than usual in order to provide teams with additional time to test before round one, Bristol Street Motors with EXCELR8 TradePriceCars.com makes the trip to Donington Park hoping to make an impression towards the sharp end of the field.

The team has a solid record at Donington in the past, with the Hyundai having finished on the podium in each of the past two seasons, whilst the team’s new-look driver line-up has also enjoyed plenty of success through the years.

Newcomer Tom Chilton is a past winner at Donington Park having tasted victory as long ago as 2004, with the vastly-experienced 37-year-old – a previous title winner in both the BTCC and the World Touring Car Championship – eager to challenge at the sharp end once again during the year ahead.

Although he missed the official test at Donington Park last month, Tom has been able to enjoy plenty of seat time in the Hyundai in the run-up to the new campaign and heads for round one buoyed by a particularly productive final day of running at Brands Hatch.

Tom Ingram is another previous Donington winner having taken to the top step of the podium on three occasions in his career to date, whilst he secured a fine second place finish in race two last year despite starting outside the top ten; only missing out on victory due to a harsh penalty handed out post-race.

Having been a title contender throughout the 2021 campaign in his first year in the Hyundai, Tom heads into the new season amongst the fancied runners for top honours this time around, and will hope to build on a solid pre-season that has seen him run well inside the top six at all three official tests.

Jack Butel also embarks in his second season in the Hyundai hoping to challenge for the Jack Sears Trophy – open only to those drivers who have yet to make it onto the overall podium in Britain’s premier racing series.

Jack was firmly in contention for honours last season before an unfortunate incident at Donington brought his challenge to an end, preventing the Jersey racer from benefitting with the impressive progress made in the Hyundai across the year.

Despite a tricky pre-season, Jack heads into round one hoping for a trouble-free weekend on track, with his aim being to try and run towards the front of the Jack Sears Trophy field and put some solid early season points on the board.

The new-look line-up is completed by Daniel Lloyd, who joins forces with EXCELR8 for what will be his second full season in the series.

Daniel was one of the star performers at Donington Park twelve months ago, scoring a career best result in qualifying before picking up three top seven finishes on race day – including a strong podium in race one.

That was one of four podium finishes in the final nine races of the campaign as Daniel ended his year on a high, and he will seek to try and carry that form into his first meeting in the Hyundai having ended pre-season testing with a top ten result in the most recent session at Thruxton.

The quartet will hit the track for two vital practice sessions on Saturday morning before qualifying takes place at 15:35, with live coverage via the ITV website.

Tom Chilton, #3, said:
“I feel we’re as ready as we can be for the opening rounds, although I think everyone on the grid will feel a little apprehensive as this is the first weekend where we’ll have used the new hybrid systems so we are taking a bit of a step into the unknown.

“On a personal level, I’m pleased to be back in a front-wheel drive car as it is what I know and I’m feeling a lot more comfortable in the Hyundai on the back of my final test at Brands Hatch, where we spent a lot of time looking at the set-up to get it more suited to my driving style.

“All credit to the team as they have worked really hard over the winter and we’ve done a huge amount of work in a short space of time, but it’s still early days and there is more still to do. Three top ten finishes this weekend would be a good start, and give me a platform to build on in the coming rounds.”

Tom Ingram, #80, said:
“I’m really looking forward to the opening rounds as Donington is a circuit where I have gone well in the past, and one where I took a win on the road last year – so we know the Hyundai works round there.

“I’ve been pleasantly surprised in testing in terms of how the car has felt with the extra weight of the hybrid system in when compared to the ballast last year, and I feel we’re in a good place. Saying that, when you are out testing, people don’t show what they really have, so we’ll only know for sure where we stand when we get into qualifying and the serious business begins.

“The hybrid will introduce a new variable into the racing and if we can go out there and fight for pole and a win to kick things off then I’ll be delighted, but we also want to maximise the points for the championship. Although it’s a long season, the races will come round thick and fast from this point on, so it’s important to hit the ground running.”

Jack Butel, #96, said:
“Like a number of our rivals, we’ve had some setbacks during pre-season testing and although the team has worked as hard as ever to get them sorted out on my car, I’m heading to Donington Park on the back foot.

“Because I’ve only had limited running, I know the weekend is going to be a massive challenge, and I’m not going to get carried away setting any big targets about what I want to achieve.

“We can see the potential that is there with the car from the times that the other three drivers were able to set in testing, but on a personal level, I need to keep my expectations in check and play the long game. If I can get three good finishes this weekend then I’d be happy, and then we can look to push forwards in the meetings to come.”

Daniel Lloyd, #123, said:
“A lot of hard work has gone in over the winter to put this deal together, and I’m looking forward to getting out on track this weekend to get the serious business underway.

“The off-season has provided some challenges with the various changes that have been made to the regulations, and it has made the running we’ve been able to do more important than ever. We’ve had a few teething issues, but we have been able to get on top of them quickly and I feel our testing as a whole has been positive and gives us a good base to work from.

“Because everyone is taking a step into the unknown a little for round one, we need to see where we stand when we get to qualifying, but I’m confident that we can run towards the sharp end this season and I can build on my results from last year.”

Justina Williams, Team Owner, said:
“The off-season has provided us with plenty of challenges with the introduction of both the new Hyundai engine and the BTCC’s hybrid systems, and I’m hugely proud of the whole team – and our partners – for the way in which they have embraced those challenges to get us ready for the opening rounds.

“Testing has been more important than ever to make sure we are in a position to hit the ground running when we get to Donington Park and I feel we can go there confident of making a strong start to the season. Of course we need to see what impact the new regulations have on the racing, but I’m confident that we have the right package and the right drivers in place to build on our success from last season and deliver more results on track.”