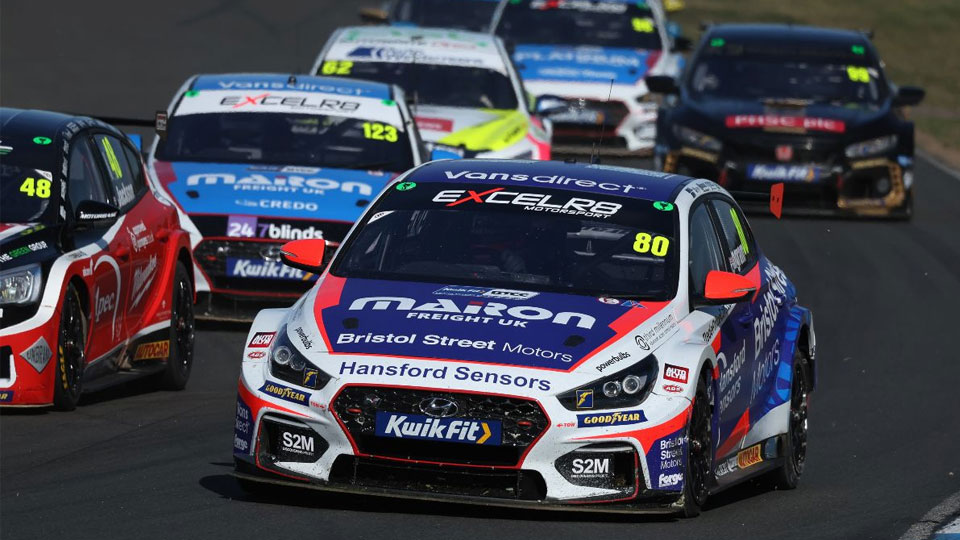 Bristol Street Motors with EXCELR8 TradePriceCars.com will hope to challenge for victory for a second successive season when the Kwik Fit British Touring Car Championship rolls into Snetterton this weekend for the seventh round of the season.

After the Suffolk-based team made the longest journey of the season to Knockhill last time out, it now makes the short trip to Snetterton looking to maintain its position at the head of the Teams’ Championship, and will also hope to add to an impressive haul of seasonal silverware having scored eight podium finishes so far in 2022.

Tom Ingram currently leads the teams challenge in the championship standings having scored three wins at the wheel of the #80 Hyundai i30 Fastback N, leaving him just five points behind former champion Colin Turkington.

Ingram has a strong record at Snetterton in the past having scored at least one podium finish at the circuit in each of the past four seasons – including EXCELR8’s maiden BTCC victory last year.

With a small amount of additional hybrid power to take into the weekend, Ingram will look to build on the impressive pace shown in testing at the circuit last month to push for more podium finishes and maintain his title challenge.

Daniel Lloyd endured a challenging weekend at Knockhill last time out that saw him fail to score in the #123 Hyundai and he now goes into round seven seeking to return to the kind of form that saw him win twice at Croft prior to the summer break.

Although yet to make it onto the Snetterton podium, Lloyd has a 100 per cent scoring record at the circuit in his previous BTCC outings and is also seeking to benefit from the work carried out in the traditional mid-season test as he bids to add to his own silverware for the season.

Lloyd will also look to close the gap to the top six in the championship standings having retained eighth place despite his tough outing in Scotland.

The Knockhill meeting allowed Tom Chilton to show continued progress in the #3 Hyundai as he extended his run of points scoring finishes to six – his longest such run since the middle of the 2020 campaign.

Jack Butel meanwhile heads for Snetterton still chasing his first points finish of the year following a frustrating weekend at Knockhill, where contact in the opening race of the weekend hampered his bid to break into the top 15.

Butel had shown strong pace in qualifying to equal his best result of the year but was then out of position for the final two races as a result of his race one issues – leaving him unable to make the most of the speed in his car.

Although he missed the Snetterton test last month, Butel will seek to benefit from the work carried out by the team to hit the ground running in practice, with a strong qualifying result being key to his chances of opening his points account.

Race action this weekend will once again be split between the main ITV channel and ITV4, with races one and two at 12:08 and 14:15 on ITV before race three rounds out a busy day of action on ITV4 at 17:10.

Tom Chilton, #3, said:
“When we tested at Snetterton last month it was really warm and we learned a lot about my car, which were then able to carry to Knockhill last time out even though it was much cooler. Given it’s going to be really hot this weekend when we go back to Snetterton, I’m confident that if we continue to follow the direction we took after the test, we can have a strong weekend.

“At the moment, we seem to have a good race car – as I showed in making up places in Scotland – but we need to try and find more in qualifying, and I think that will be a big part of our focus during free practice.

“I made up a few places in the standings last time and if we can make up further ground this weekend then I’d be happy. I really want to try and get into the top ten before the end of the season as that is where I should, and three more solid results at Snetterton will help me move closer towards that goal.”

Tom Ingram, #80, said:
“Knockhill was a weekend that really favoured the rear-wheel drive cars and for us, it was a case of just scoring as many points as we could knowing that there were circuits to come which are better suited to our package.

“Heading to Snetterton, I’m confident that we are going to have a strong car and will be right in the mix towards the sharp end. We took the first win for the Hyundai at the circuit last season with a car that wasn’t as good as the one we have now, and we enjoyed a productive test last month where we showed good pace and were able to do a lot of important work.

“We have to make sure we maximise the small amount of hybrid we now have for qualifying so we are in the best place possible for race day, as we’re at that stage of the season where every point is more important than ever. The weather is set to make this weekend even more of a challenge with the high temperatures, but it’s a challenge we’re ready for.”

Jack Butel, #96, said:
“Although Knockhill was frustrating in terms of the results, qualifying inside the top 20 showed once again that that the pace is there in the car. Unfortunately, we were just out of luck on race day, which has been the case more than once this season.

“Heading to Snetterton, I’m hoping that we can build on the pace we showed on Saturday at Knockhill, because I know that if we can get ourselves higher up the grid, we are more than capable of fighting for some points finishes.

“The Hyundai was a strong package at Snetterton last season and it has only got better since then, so I’ll be pushing hard to try and get into the top 20 in qualifying and then fight for those points on race day.”

Daniel Lloyd, #123, said:
“I’m pushing the reset button after Knockhill and am heading to Snetterton with my focus firmly on trying to get back onto the podium. There are a few things that we were able to learn during the test last month that I feel will be beneficial this weekend, and we should be able to hit the ground running from the moment practice kicks off with a car we know will perform.

“Although the weather forecast looks like it’ll be a hot one, it was warm during the test so we have more of an idea what to expect rather than if the test had been in cooler or wet conditions. It won’t make it easy for us behind the wheel, but one of the strengths of the Hyundai is our cooling package and hopefully that will work in our favour during the three races.”

Justina Williams, Team Owner, said:
“Snetterton was a fantastic weekend for us last season with our maiden race win, and we make the short trip from the workshop this time around feeling confident about our chances. Knockhill was a challenging weekend but were were able to retain our advantage at the top of the Teams’ Championship, and our goal has to be to try and defend that lead on home soil.

“The Goodyear tyre test last month allowed us to complete plenty of meaningful running and collect a lot of data that will benefit us in the three races this weekend, and I’m confident that all four drivers will be able to challenge for some strong results.”