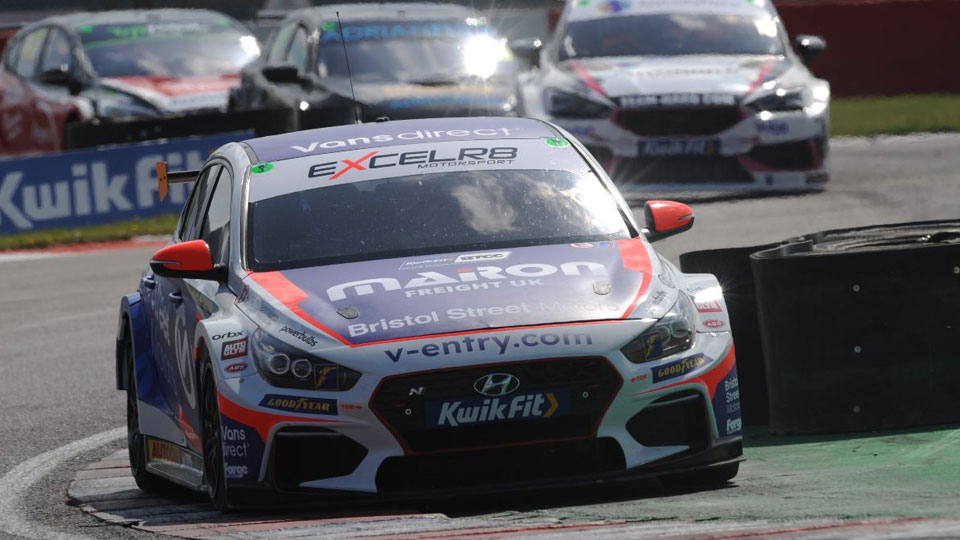 Bristol Street Motors with EXCELR8 TradePriceCars.com will seek to build on an impressive start to the Kwik Fit British Touring Car Championship’s hybrid era when the series heads for Brands Hatch this weekend for the second meeting of the campaign.

The Suffolk-based team secured a place in series history as the first team to secure victory under hybrid power at Donington Park last month to lay down an early marker in the championship battle, with the team also able to celebrate success with its all-new Hyundai engine.

That win came thanks to Tom Ingram in the opening race of the weekend, and a further podium finish in race two means he leads the championship standings as the field heads to Brands Hatch this weekend.

Ingram has taken victory at the Kent circuit four times in the past, including a dramatic success last year where he snared victory with a move on the final lap.

The only downside for the two-time Independent Champion is that – thanks to revised regulations this season – he will not be able to make use of the hybrid system at all during qualifying and will have his usage restricted to just nine of the 24 laps scheduled in race one.

Tom Chilton endured a weekend of frustration at Donington Park, where he was unable to truly show his pace at the wheel of the #3 i30 Fastback N.

An unfortunate issue with the exhaust on his car ahead of race two, and then contact from a rival in race three, meant he picked up just a single points score from the opening meeting, with the experienced racer hoping to now kick-start his season at the circuit where he made his BTCC debut back in 2002.

Then, he picked up an impressive podium finish first time out and the former Independent Champion has gone on to take to the top step on two occasions at the Kent circuit in his career to date.

With full hybrid deployment going into the weekend, Tom will hope to challenge for a big haul of points to get his championship campaign back on track.

Jack Butel was another driver who suffered misfortune at Donington Park, with the Jersey-based racer unfortunately forced out of the opening two races due to electrical issues.

However, he showed his potential with a strong run in the final race of the weekend, and will be eager to build on that when he returns to a circuit where he scored his first ever BTCC point.

Although a tricky pre-season testing programme with the new hybrid technology means Jack is somewhat on the back foot, he goes into round two hopeful of pushing forwards towards the points scoring positions, with a focus on also improving his placing in the Jack Sears Trophy standings

Daniel Lloyd rounds out the team’s line-up seeking silverware for the first time this year having gone close at Donington Park.

One of the pacesetters during practice, Daniel was left with work to do after a damper issue in qualifying left him outside the top ten, but he recovered well to take three strong points finishes – including fourth in the final race of the weekend.

As he continues to extract more pace from the Hyundai, Daniel will hope to challenge for a place on the podium this weekend whilst also maintaining his position inside the championship top ten.

In a change to the usual broadcast plans for this weekend, coverage of the three BTCC races will be shared between ITV4 and ITV, with race one live ITV4 at 11:30 and then re-run on ITV ahead of live coverage of races two and three at 14:10 and 16:15.

Tom Chilton, #3, said:
“Although Donington Park didn’t go to plan for me in terms of results, we made a lot of changes to the car to get it better suited to me and it leaves me feeling much better prepared for what is to come. Brands Hatch is where the season starts for me, and I want to hit the ground running as soon as we take to the track.

“Had things not gone against me, I genuinely feel we could have scored a podium in the opening rounds and my goal has to be to challenge for trophies this weekend. Brands Hatch is my local circuit and one of my favourites, and I’m confident that I can be up there towards the front.

“Having full hybrid in qualifying could be worth a few tenths at a circuit where the times are always very tight, and I want to take full advantage of that to set me up well for race day.”

Tom Ingram, #80, said:
“This weekend is a big step into the unknown because it’s the first time we will have gone into qualifying with no hybrid behind us. I don’t think the impact will be as big as carrying maximum ballast was in the past, but the simple fact is that we don’t know how things are going to play out and it is going to be a bit of a voyage of discovery.

“If we could get into the top ten in qualifying and then score three top six finishes, it would be fantastic, but we may need to revise our goals depending on what impact the hybrid has in qualifying. We just have to focus on ourselves and make sure that we maximise the points that are available across the three races.”

Jack Butel, #96, said:
“There is a real positive vibe about the team going into the weekend, and confidence that the issues that affected me in testing and at Donington Park are now sorted.

“There’s no doubting that I’m a bit behind some of the others because of my running has been a bit limited so far, but we left Donington in a good place after the final race and Brands Hatch is where my season will really start.

“I have good memories of scoring my first ever BTCC points on the full GP circuit and it would be great if we could break into the points this weekend, but the main focus is on three solid finishes in the Jack Sears Trophy to start making up ground in the standings.”

Daniel Lloyd, #123, said:
“We didn’t have the easiest weekend at Donington Park in the opening round but we came away from it with three solid results on the board to kick-start the season and we know there it still more to come.

“Hopefully when we get to Brands Hatch this weekend, we’ll have no repeat of any of the little gremlins we had three weeks ago and can hit the ground running from the start of practice.

“It’s going to be interesting to see what impact the hybrid rules have on Saturday because qualifying around the Indy circuit can be so close, but I’m confident that we can be in the mix in the races to maintain our bid for strong points.”

Justina Williams, Team Owner, said:
“Donington Park was a fantastic weekend for us as a team but we can’t rest on our laurels and have to knuckle down and fight hard to maintain our form when we get to Brands Hatch.

“All four drivers have the potential to score some good results this weekend and we are confident of being able to fight for strong points across the board to maintain our championship challenge.”