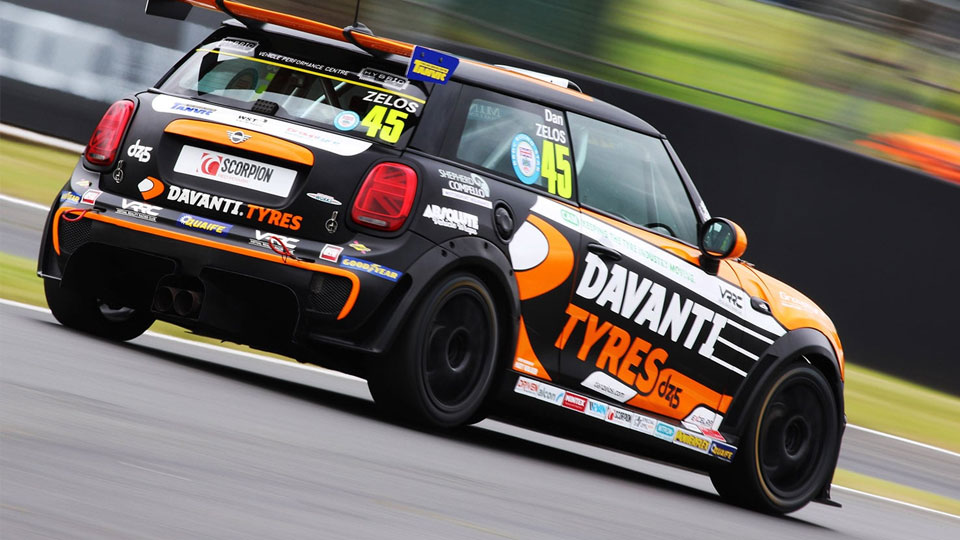 Talented young Norfolk ace Dan Zelos has taken another step closer to his dream of competing in the UK’s premier motor racing series after being appointed EXCELR8 Motorsport’s official British Touring Car Championship Reserve Driver for 2022 – while confirming that he will return to the MINI CHALLENGE to defend his hard-fought crown.

Zelos has spent seven of the past eight years showcasing his skill on the high-profile BTCC support package, twice placing inside the top four in the standings in Ginetta Juniors, reaching the rostrum in the Renault UK Clio Cup and – most recently – battling his way to championship glory in the fiercely-disputed MINI CHALLENGE behind the wheel of his distinctive, Davanti Tyres and CAM Systems-sponsored car.

In parallel with that, Zelos fulfilled the role of Development Driver for EXCELR8’s front-running BTCC outfit, and in 2022, the former Norwich University of Arts and Dereham Sixth Form College student will be even more tightly integrated with the team’s flagship touring car programme, following his promotion to official Reserve Driver status. That means he will be the first choice to jump into the fray should any of the squad’s four regular drivers be unable to compete for any reason.

Zelos will additionally benefit from two complete test days in the Hyundai i30N Performance – one of which will take place at Oulton Park’s mid-season tyre test – as well as extensive time with the BTCC side of the operation at race weekends, allowing him to continue honing his experience and developing his craft as he targets a future at the pinnacle of the sport himself.

The highly-rated Dereham-born hotshot will simultaneously return to the track for a fourth full campaign in the MINI CHALLENGE, which gets underway at Donington Park later this month (23/24 April) and which will enjoy live primetime exposure on ITV4 at every event.

“EXCELR8 feels a bit like my motorsport ‘family’ now. I’ve been with them since 2019, and over the past couple of seasons, I’ve gained invaluable insight and experience from the time I’ve been able to spend with the team’s BTCC drivers and engineers. I’m really looking forward to strengthening that relationship this year as EXCELR8’s official BTCC Reserve Driver, and to putting all my newly-acquired knowledge to good use when I finally climb into the cockpit of the Hyundai i30N.

“Ever since posing for photos next to the car to announce my appointment as Development Driver in 2020, I’ve been itching for my chance to actually drive it. It was evident from the start that the Hyundai had the potential to be a race-winner in the BTCC, and Tom Ingram’s performances and results with it last year only served to back that up. The tyre test really can’t come soon enough!

“It’s no secret that the BTCC is where I ultimately want to be, and I feel very privileged to get to play an even bigger role in the championship now as it enters its hugely exciting hybrid era. Being made Reserve Driver is a further significant step in the right direction, and I fully intend to grab the opportunity with both hands. Hopefully I can use it as a springboard to show what I’m capable of.

“Alongside that, obviously, I have another very important job to do this year. Winning the MINI CHALLENGE last season was the highlight of my career so far, but the competition looks set to be stronger than ever in 2022. That means retaining the title will be an extremely tough task – but that’s 100 per cent my goal and I’ll be giving it everything I’ve got to achieve it.”

“We’re delighted to reward Dan for his outstanding title-winning campaign in the MINI CHALLENGE by promoting him to the role of EXCELR8 Motorsport BTCC Reserve Driver in 2022. He is a very gifted and skilful racer who is right on the verge now of breaking into the BTCC and totally committed to forging a successful career in the championship.

“I think Dan’s performances last year – particularly his four dominant wins and the way he handled the pressure in his stride in the Brands Hatch finale – proved that he has all the qualities required to shine at the highest level, so we look forward to seeing how he gets on in the Hyundai during his two test days and how he stacks up against our regular drivers.

“Dan has benefitted a great deal from his increasing interaction with EXCELR8’s BTCC team, and it has been an absolute pleasure and tremendously rewarding to watch him grow in confidence and stature in the process. That has unquestionably played a part in his results over the past couple of seasons – and I have no doubt that he will be a real force to be reckoned with in the MINI CHALLENGE once again this year.”

Dan is seeking further partners to join him on his exciting high-speed journey. If you are interested in getting involved in life in the fast lane, please contact: dan@danzelos.com