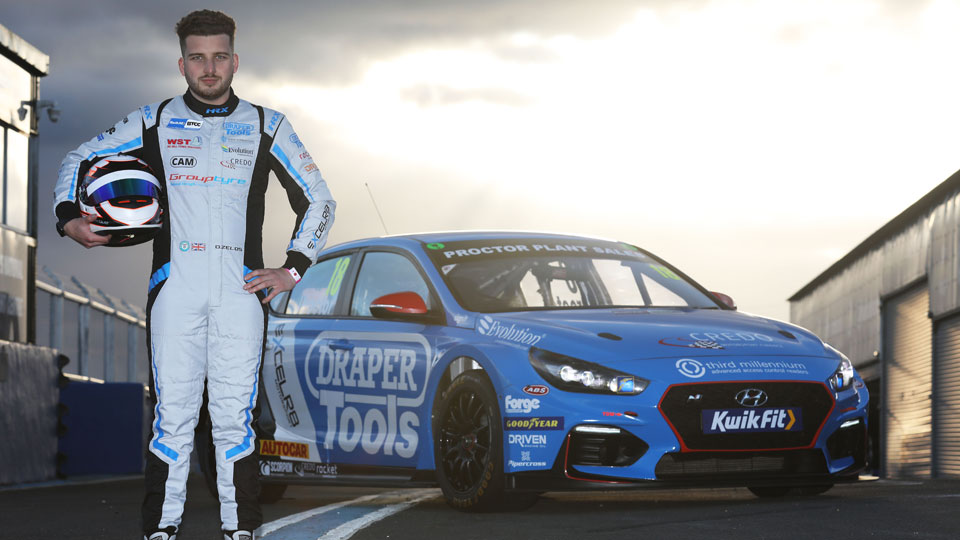 Dan Zelos has moved another step closer to his goal of competing in the British Touring Car Championship – the UK’s premier motor racing series – after being unveiled as the first member of EXCELR8 Motorsport’s new BTCC Driver Development Academy.

Talented Norfolk ace Zelos is no stranger to the BTCC paddock, having competed in the Ginetta Junior Championship and Renault UK Clio Cup from 2014 to 2018, achieving 59 top ten finishes and reaching the rostrum on an impressive 18 occasions.

Last year, he maintained his upward career momentum away from the TOCA package by clinching the Rookie Cup crown in the MINI CHALLENGE with EXCELR8, tallying two outright victories, three pole positions, four fastest laps and nine podiums from 17 starts.

In 2020, the Dereham-based hotshot has returned to the fiercely-disputed single-make series – now a feature on the high-profile BTCC support bill – and his title bid got off to a strong start at Donington Park four weeks ago behind the wheel of his distinctive, Davanti Tyres and CAM Systems-sponsored MINI. As the action resumes at Knockhill in Scotland this weekend (29/30 August), Zelos is firmly in contention, placed fourth in the championship standings amongst the 28 protagonists in the headlining JCW class.

What’s more, the 22-year-old British Racing Drivers’ Club (BRDC) Rising Star will head into battle in Fife with a spring in his step, in the knowledge that he is now a bona fide member of the BTCC family and that at some stage later in the year, a test awaits in EXCELR8’s potent new Hyundai i30N Fastback N Performance challenger – a car that became a podium-finisher in only its third BTCC start earlier this month.

“Ever since I joined the TOCA package in Ginetta Juniors almost seven years ago, this is something I’ve been dreaming of, aiming for and striving towards – to officially be part of a BTCC team,” enthused Zelos. “I genuinely can’t thank EXCELR8 enough for their belief in me.

“This has been a difficult year for everybody due to the repercussions of COVID-19, so to get an opportunity like this is amazing – I feel very honoured by the appointment. Not only that, but EXCELR8 is a young and exciting team in the BTCC that has brought a brand new marque onto the grid in the shape of Hyundai, and the i30N has already proven it is capable of fighting at the front in what is arguably the toughest tin-top championship in the world.

“It was quick straight out-of-the-box, and for EXCELR8 to pick up a trophy in the first event of the season and score points in every race so far is an incredible achievement that only serves to underline the Hyundai’s long-term potential. I can’t wait to climb behind the wheel and experience it for myself!”

Zelos already has several laps in BTCC machinery under his belt, from a brief test at Silverstone towards the end of 2016. EXCELR8 Motorsport Team Owner Justina Williams is confident that the progress he has made in the meantime will stand the former Norwich University of Arts and Dereham Sixth Form College student in good stead for getting to grips with the i30N, as she tips him for a bright future at the pinnacle of British motorsport.

“Now that we have begun EXCELR8’s second season in the BTCC with some impressive results from our brace of Hyundais, it is time to turn our attention to the original plan for our BTCC programme, which was to help provide a route into the series for our MINI CHALLENGE drivers,” she explained.

“Ultimately, the pathway to the BTCC relies not only upon skill behind the wheel, but also a driver’s ability to generate marketing partnerships and sponsorship revenue. With this in mind, we are delighted to announce our new BTCC Driver Development Academy for EXCELR8 JCW drivers that meet qualification criteria and to confirm Dan as the first EXCELR8 BTCC Development Driver, with a second to be revealed in the coming weeks.

“Dan has regularly shown the pace and prowess in the MINI CHALLENGE to mix it right at the front of the pack, with multiple podiums and race wins to his name. His ambition is to take the next step into the BTCC, so the EXCELR8 BTCC Driver Development Academy will help Dan to bolster his experience in preparation for this, while providing BTCC-relevant content as part of his marketing plan.

“Over the coming months, he will spend time with our BTCC team to broaden his knowledge of this high-level operation and he will test the Hyundai during the off-season. Together, we aim to break Dan into the BTCC as soon as possible.”

The third of this weekend’s three MINI CHALLENGE races at Knockhill is due to be shown live on ITV4 at 14:10 tomorrow (Sunday, 30 August), as part of the channel’s comprehensive broadcast package that attracts some 20 million viewers.