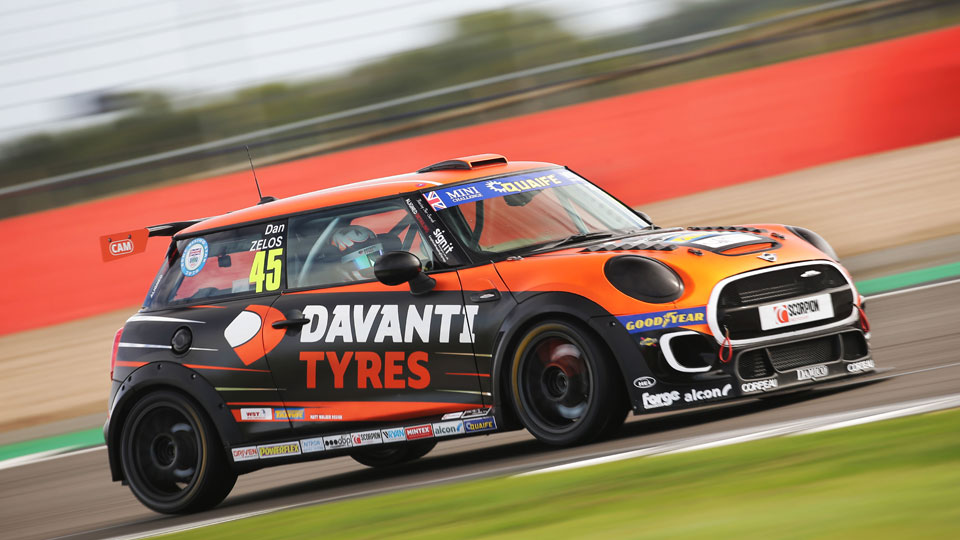 In 2019, the 22-year-old British Racing Drivers’ Club Rising Star placed third overall before improving to second last season, pushing team-mate Nathan Harrison all the way for the outright title behind the wheel of his distinctive, Davanti Tyres and CAM Systems-liveried MINI and outscoring a trio of ex-BTCC drivers in the process.

Notably, Zelos’ tally of seven podiums from 13 races was unrivalled in the high-calibre, 34-strong field, and had he not been punted out of second place with just two laps remaining at Silverstone – denying him an eighth rostrum appearance – he might conceivably have pipped Harrison to championship glory.

With that experience now under his belt, the highly-rated Dereham-born hotshot is fired-up for an all-out attack in 2021, when another bumper grid is expected as the MINI CHALLENGE continues to benefit from the unparalleled free-to-air exposure afforded by its prime slot on the BTCC package, with almost 20 million viewers regularly tuning in to follow the action live on ITV4.

As part of his pre-season preparations, Zelos has been busy over the winter participating in the virtual MINI CHALLENGE Official eSeries and MSR Motorsport Consultancy FastR Touring Car eSeries, picking up four podiums from eight starts in the latter despite only getting his own simulator at Christmas.

He also has half-a-day’s testing in EXCELR8’s Hyundai i30 Fastback N Performance to look forward to during the course of the campaign, in his ongoing role as the team’s BTCC Development Driver. That is a key element in his future plans as he targets graduation to the UK’s premier motorsport series in 2022 – hopefully, with the coveted MINI CHALLENGE crown etched indelibly onto his burgeoning CV…

“After finishing third in 2019 and second in 2020, there can be just one goal for 2021,” acknowledged the former Norwich University of Arts and Dereham Sixth Form College student. “I’m under no illusions that it’s going to be an extremely tough field again, but I’m feeling confident and I’m ready for the challenge that lies ahead. I’ve definitely grown and improved over the past couple of seasons, beating three ex-BTCC drivers last year and equalling [eventual champion] Nathan Harrison for pace pretty much everywhere we went.

“The continuity of staying with EXCELR8 is a major plus. I know the team inside-out and not only do I feel very comfortable and at home there, but they are unquestionably the benchmark in the MINI CHALLENGE and have been for several years. I also have an excellent relationship with my mechanic Dan Cusick – 2021 will be our fifth season working together, and I know every time I go out that I’ll have a great-performing car underneath me to allow me to compete right up at the sharp end.

“I don’t feel any extra pressure from being ‘team leader’ now. As I said, I repeatedly proved that I’m on a par with Nathan, who was something of a veteran in the championship, so it doesn’t feel like a step-up in any way – more a natural progression. I’ve always been keen to help my team-mates to improve by working with them on the data analysis aspect too, and I have no doubt that they’ll keep me on my toes so I’ll need to ensure I’m absolutely on top of my game.

“After all the disruption last year, it’s fantastic to have a much more normal season to look forward to – not just for me but for my loyal sponsors as well, because 2020 wasn’t easy for anybody. I think consistency will be even more important with a full complement of races on the calendar, and that’s certainly one of my strongest suits, and we’ve got a decent pre-season testing schedule lined up alongside all the training and racing I’ve been doing on my simulator in recent weeks, which is keeping me sharp.

“I’m also excited about having much more involvement in the touring car side of things this year; that was the initial plan last year, but it was obviously scuppered by COVID and all the associated restrictions. I’m looking forward to getting more familiar with EXCELR8’s BTCC operation, building a relationship with everybody there, standing in the shadow of the team’s race drivers, learning as much as I can from them and finally getting behind the wheel of the Hyundai for myself – all hopefully in preparation for a fully-fledged touring car debut in 2022…”

EXCELR8 Motorsport Team Owner Justina Williams has similarly high hopes for the forthcoming campaign and beyond, having watched Zelos mature and grow into his new team leader role over the past two years.

“We are delighted to confirm Dan’s return to EXCELR8 Motorsport to spearhead our MINI CHALLENGE championship assault,” she asserted. “He has proven time and again that he has all the skills required to achieve regular podium finishes and race wins in the series and that he is a match for anybody when it comes to raw pace and racecraft. In fact, the overall title is probably the only real accolade missing from his résumé.

“As the highest-placed returning driver this year, there will inevitably be a certain degree of expectation on Dan’s shoulders, but it is a pressure that I am confident he will handle in his stride, in his trademark calm, unflappable manner and we will of course do our utmost to give him the equipment and environment he needs to get the job done. He also brings a great deal to the table in terms of helping the other drivers in the team to progress, which is a big part of what we are about here at EXCELR8.

“Alongside his title bid, Dan will continue to serve as EXCELR8 Motorsport’s Development Driver for our expanding BTCC programme, making him a key member of the team on both the MINI CHALLENGE and touring car sides of the operation. We are very much looking forward to working with him again this coming season – and hopefully well into the future.”

The 2021 MINI CHALLENGE is due to get underway at Zelos’ home circuit of Snetterton on 12/13 June.