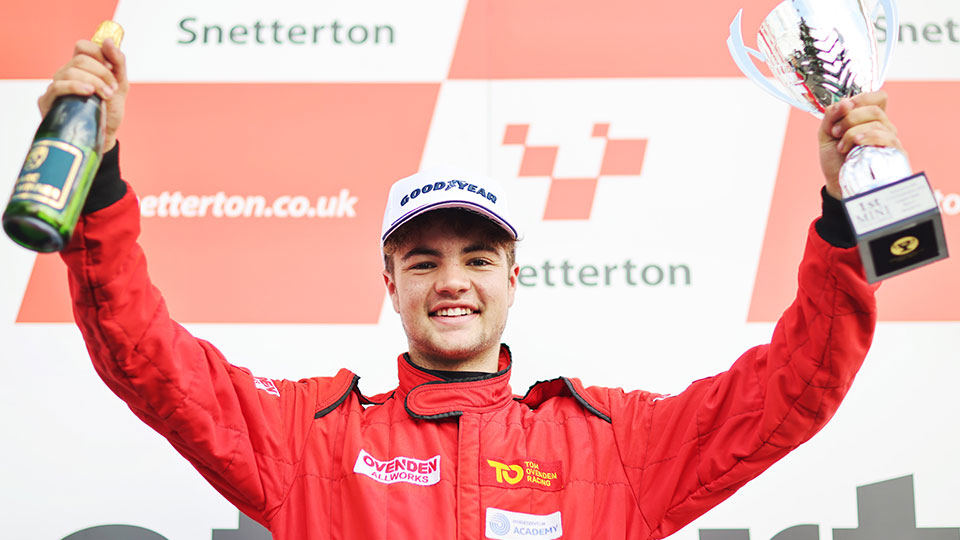 Tom Ovenden will return to the Quaife MINI CHALLENGE Trophy for a third season in 2023 after extending his relationship with front-running outfit EXCELR8.

The former rallycross champion enjoyed a strong campaign on track last year in the Cooper class as he took two wins at Thruxton and Snetterton.

The teenager would add four further podium finishes to remain in championship contention until the latter stages of the campaign; ending the year in an encouraging third place in the overall championship standings.

That came twelve months on from an impressive rookie campaign that had seen Ovenden named as the ‘Most Improved Driver’ in the series.

Currently the highest-placed returning driver to confirm plans to compete in the Cooper class this season, Ovenden will now bid to fight for the overall championship title and is set to go into 2023 amongst the favourites for top honours.

“I am delighted to be continuing my motorsport career with EXCELR8 into 2023, as I have formed an excellent relationship with everybody in the team over the past two years,” he said.

Ovenden will also strengthen his ties with the EXCELR8 squad by stepping into the role of BTCC Academy Driver for the year ahead.

That new role will see Ovenden benefit from working alongside EXCELR8’s British Touring Car Championship title-winning team as he bids to further his motorsport career – with plans to progress into the MINI CHALLENGE’s JCW class and then hopefully into the BTCC in the coming years.

“The BTCC Academy role is a very exciting opportunity for me, and I am delighted to have the opportunity to work closely with the touring car side of the team from this season,” he said.

“It will allow me to improve myself as a driver and also provide me with the chance to learn a number of things off-track that will hopefully help me to then move up the ladder with the team into higher categories in the future.

“It promises to be a great season, and I can’t wait to go out there and give it everything I have got to try and win this championship!”

Team Owner, Justina Williams welcomed the fact that Ovenden will remain part of the EXCELR8 family for a third year in his expanded role.

“Having worked with Tom for the past two seasons, we know that he is a young driver with a huge amount of potential,” she said. “He has quickly established himself as a front-runner during two particularly competitive championship campaigns, and keeping him onboard was key in our bid to fight for the Cooper title.

“Alongside that, we’re delighted to promote Tom into the role of BTCC Academy Driver and I have no doubt that he will grasp the opportunity with both hands as he bids to further his racing career.”