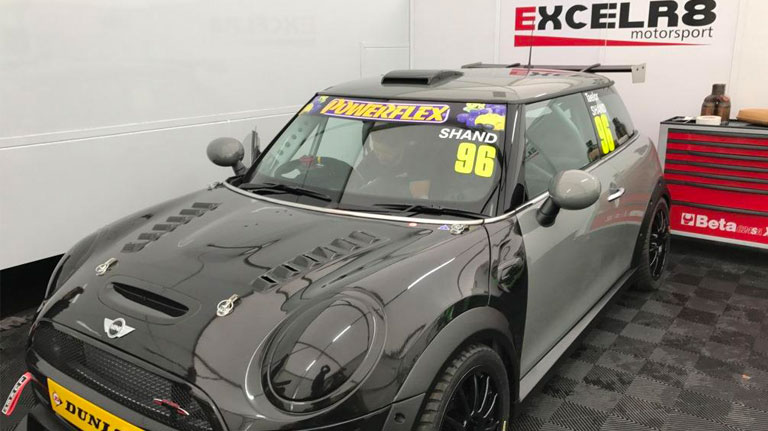 Taelor Shand joins Excelr8 Motorsport for her first full season racing in the MINI CHALLENGE in the JCW class. Taelor is no stranger to racing in Mini’s however, Taelor’s first experience of circuit racing was in 2015 in the last two rounds of the Scottish Mini Cooper Championship at Knockhill having spent the majority of that year just testing.

2016 was her first full season in the Scottish Mini Cooper Championship and she managed to improve on her lap times and grid positions as the season progressed and also took the overall Ladies Championship that year. In 2016 she also raced in the English MINI CHALLENGE at Snetterton in the Open Class in an R53 Cooper S which gave her the first taste of racing in this Championship. 2017 saw her team up with Minimax for the season where she improved round on round and regularly qualifying within a second of pole position and finishing within the top ten with her best result at Rockingham in the away round where she finished 5th overall.

The 2018 season started for Taelor at what was the last round of the 2017 MINI CHALLENGE where she got her first taste of her JCW car, as she looks forward to the 2018 season Taelor had this to say on the season ahead  “Expectations for 2018 include gaining the experience in the JCW as several major differences to the Scottish Cooper, for example the added power, sequential gearbox and the Diff with the slicks and gaining experience of all the different circuits during the championship, so in 2018 the intention is to use this as a steep learning curve but to push as hard as possible to achieve the best results”.