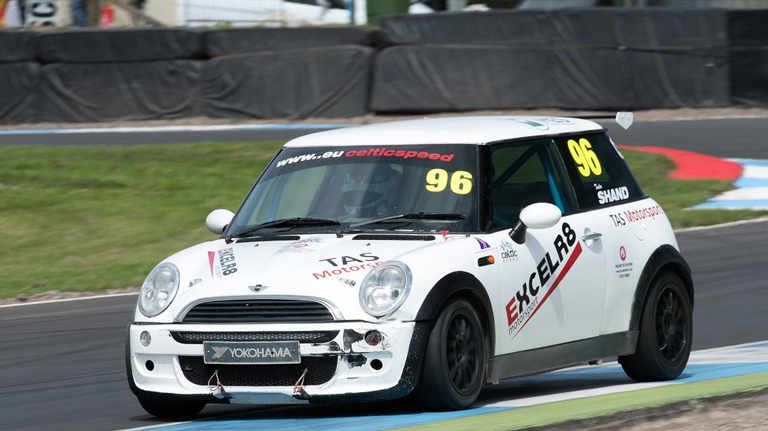 Having not raced in a Scottish Mini Cooper since last October, Taelor was apprehensive about how she was going to find driving the slower Cooper at Knockhill, having been driving the JCW all season in the MINI CHALLENGE. Nevertheless, Taelor managed 6th quickest after the first practise session, setting her up well for qualifying the next morning.

Qualifying started well and Taelor was off to a good start. She was putting in her hottest lap of the session when it was halted due to a red flag. At the restart, Taelor was sitting 10th and her pace continued to improve but was caught out by 2 hundredths of a second in the last lap resulting in qualifying 12th. Disappointing as Taelor was hoping for a top 10 position.

Although not having done a race start in a Cooper in almost a year, Taelor flew off of the line as the red lights went out. The race had some great close and fair racing with Taelor swapping positions several times and she crossed the line in 11th place. She’d hoped to have moved further up the field but looked forward to race 2.

Taelor started 11th and couldn’t get the car off the line quickly, loosing three places at the start of the race. Taelor pushed hard and was chasing down a car in front and with a better run out of the chicane, pulling more speed up to the corner attempted to go up the inside for the corner, however they defended and while carrying more speed, Taelor made a move to go round the outside but unfortunately contact was made sending the other car off track.

Taelor was again involved in some very close racing and being chased down by car 95, tried to pull a brave move through Duffus to gain an advantage, however carrying a lot of speed into Duffus, she couldn’t slow the car enough to get round MacIntyre and ended up in the tyre wall and beached in the gravel trap. Fortunately the car had received very little damage and was easily repaired.

After a three point penalty and knowing this would be the last race with the SMRC, Taelor wanted to gain as many places as possible. Starting 21st, Taelor managed to get an amazing start off the line, getting up to 14th by the end of the first lap but an incident had called out the safety car. When the safety car lights went out and racing resumed Taelor continued making up more places, again the racing was close but fair and by the finish line had managed 8th place – a great result considering I started from the back of the grid.

Overall, a great weekend’s racing at Knockhill. You can see Taelor racing again this weekend at Brands Hatch in the MINI CHALLENGE.