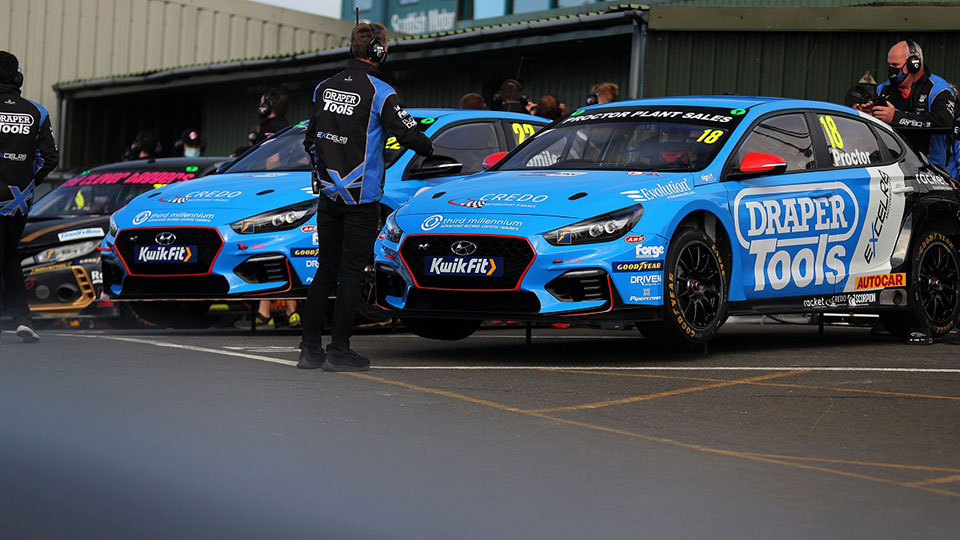 EXCELR8 Motorsport ventured into mid-season break as a team on form. Knockhill was another silver-plated weekend as Senna Proctor recorded his first podium and pole position of the year. It was the second trophy of the year for the Suffolk-based outfit, after Chris Smiley’s spectacular opening round success.

Half a month off has given them time to relax and recuperate after the hectic four rounds in five weeks. Returning to normality, EXCELR8 arrive at Thruxton ready to once again challenge the establishment at a circuit that will mean a lot to them.

Home circuit of their primary sponsor, Draper Tools, both Smiley and Proctor will know the incentive of proving their worth around the “UK’s fastest circuit”

For the first time this season, Proctor enters the round in the top ten of the driver’s championship. An impressive achievement considering his triple retirement at Donington saw him come away with nothing. Since then, the Yorkshire star has rarely been out of the top twelve in any race, even finishing all three races at Brands Hatch, an equally fast and flowing circuit inside the top ten.

While 2020 marks a debut season for Proctor’s relationship with EXCELR8 Motorsport, the Driffield driver, who turned 22 last week, already has three years’ experience to call upon.

Thruxton was the home of one of his previous podium experiences, picking up a third place in 2018 while driving a Vauxhall Astra. Holding his position at the start and defending from Sam Tordoff and eventual champion Colin Turkington, Proctor displayed experience far beyond his years. Now, 2 years later, he’ll be working with the Hyundai i30 to repeat that triumph.

Similar success will be on the cards for Chris this weekend too, as he has proven a top ten regular this season. Like Proctor, Smiley has scored in every race he’s finished this season and at Britain’s temple of speed, will be one to watch in the front-wheel drive Hyundai.

At Knockhill last time out, he was one of the stars of the final race. Despite carrying ballast, the Northern Irish driver handled his nerve, absorbing the pressure from a chain of machines that included Tom Ingram and Turkington.

Just 30 miles from their Chandler’s Ford base, Draper Tools will be out in force to support their bright blue Hyundai, operated by the experienced EXCELR8 outfit.

“Excellent to be back at Thruxton for another season and of course it’ll be extra special this year with the local support of our partners Draper Tools. Last year in Hampshire we proved our reliability by finishing both cars in all three races. We’ll be hoping to do the same in 2020, but this time we expect to be fighting at the sharp end of the rankings.

“The three-week break has been useful but there has been no let up in the pressure to make it all happen in what is already proving to be a challenging, shortened year. We will strive to continue the momentum we perfected at Knockhill in which we recorded our first double top seven finish and seeing our cars on the first and second rows of the grid in race three. I am really looking forward to it with the whole team.”

“We can use the experience I learned from the Astra around Thruxton. It’s a high speed track, which I thrive off and I always enjoy driving it, so we should be able to roll out on Saturday with a good understanding of what’s the car is going to give us and battle for the top spots again. Hopefully in race one or two this time and not just race three.”

“I really like Thruxton, fastest circuit of the year. I think our car will be really strong there. We’ll be hoping to secure another three points positions, challenging for the podium and being in the mix once again.”

Qualifying will start at 15:20 on Saturday 19th September, with all three races broadcast live on ITV2 on Sunday.