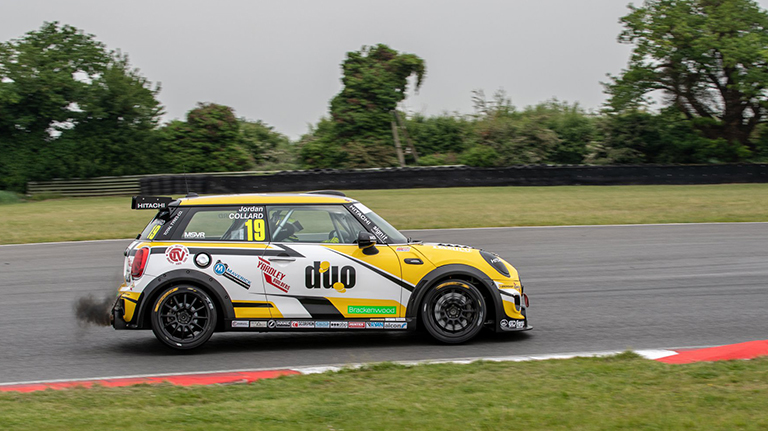 The team had a bitter-sweet weekend at Snetterton, with strong results from all of our drivers and wins for Nathan Harrison and David Robinson in Race 1 and 2 respectively. But race 2 dramas for Rob Smith and Luke Reade, a drive shaft failure for Stuart Gibbs in race 1, along with a clerical error by the team in qualifying for Jordan Collard, causing him to have all his times, including a stunning pole time of 2:03.8 to be taken away and a 10 second penalty applied, meant that any celebrations were muted.

We want to publicly apologise to Jordan for the admin error which involved incorrectly writing a digit of a tyre serial number on the official tyre form. The correct and legal tyre was fitted to the car, but an innocent error by the team meant that the paperwork for the tyre was incorrect, which in turn resulted in Jordan being penalised for a breach of the tyre regulations. Such a bitter pill to swallow for all involved, but the lesson will be learned.

Jac Maybin nevertheless impressed with two fantastic podium finishes including almost winning Race 2 in a drag race to the line with team mate David Robinson. Luke Reade’s weekend was also mixed with a strong result in Race 1 followed by a DNF in Race 2 after an incident with Rob Smith in the Excelr8 satellite MINI UK team who had enjoyed a strong result in race 1 after re-finding his form after a tough start to the season at Oulton and Rockingham. Ollie Pidgley also drove two determined races to finish mid pack in both races and Taelor Shand kept on pushing to close the gap to the mid pack.

In the MINI UK team awning Sam Weller’s debut in the JCW class was bright with a strong 10th place in race 1 and a solid 14th in Race 2 in his Dunlop guest car.

Will Beaumont the Evo magazine writer in the MINI UK team awning enjoyed his debut in the MINI CHALLENGE, so look forward to reading about his exploits in the EVO magazine later in the year.

All in all a positive weekend, but with some real low points taking the shine off the silverware.