Silverware and Sunshine During Weekend of Firsts for EXCELR8 Motorsport 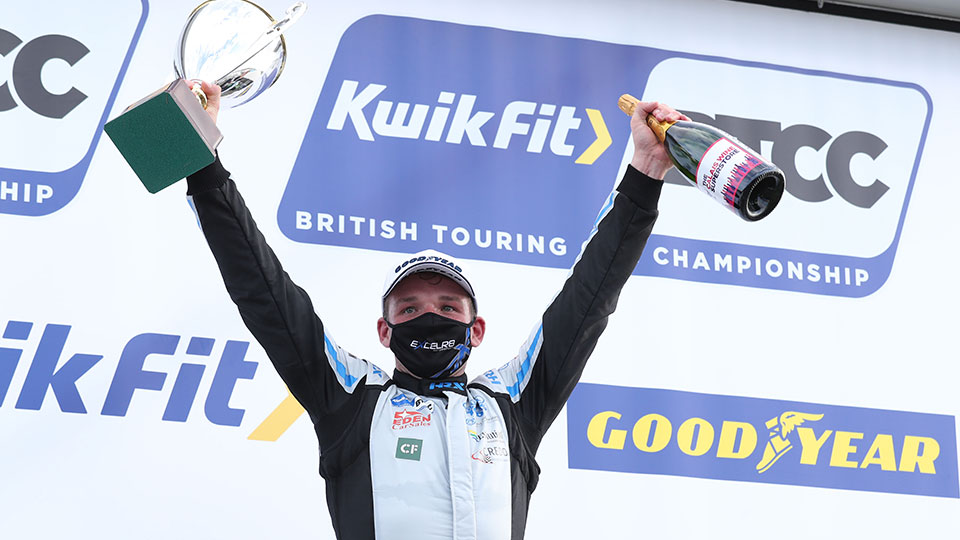 Silverware and Sunshine During Weekend of Firsts for EXCELR8 Motorsport

The first British Touring Car Championship weekend threw up some incredible results and several firsts for the EXCELR8 Motorsport team. The biggest cheer though came in the final race of the day as Chris Smiley crossed the line in 2nd to secure EXCELR8 Motorsport’s maiden BTCC podium. The team have increased their points tally more than seven-fold from 2019 in only a single round!

Baking summer temperatures had welcomed the drivers on Saturday as the series returned to Donington Park and returned to racing for the first time in nine months.

For EXCELR8 Motorsport, 2020 represented the start of a new era of racing, with the introduction of the Hyundai i30 Fastback N Performance for the first time into the series. Piloting the South Korean pair would be two more hotly anticipated new names, with Chris Smiley and Senna Proctor heading the charge. Over the weekend, Smiley secured the teams best ever finish in race one, with a maiden Independent Class podium, before their maiden reverse grid pole for race three, which, after an incredible defensive display, secured him the team’s first ever overall silverware.

A phenomenal display for the Suffolk-squad, who leave Donington seventh in the teams’ championship and drivers’ standings, courtesy of Chris Smiley.

As the EXCELR8 team dived into free practice it was the first opportunity for the Draper Tools-sponsored Hyundai to flex its muscles, with Smiley setting a fastest final sector speed on during the initial run. The Northern Irish driver setting a Practice best of 1:09.917, under half a second slower than pace setter Turkington.

Proctor meanwhile would prove his own potential in second leaping to 6th, as the third quickest Independent in the closing stages. The pace proving justification for the EXCELR8 team who have been working hard over the winter.

As the weather dried and the temperatures rose the benchmark fell towards the end of qualifying, with Smiley and Proctor outdoing each other until the red flag for a knocked tyre barrier interrupted their groove. Proctor and Smiley concluded their first qualifying session of the season in 11th and 14th respectively as another late rain flurry ensured Smiley was unable to improve.

Chris Smiley jumped two places off the start to run twelfth before the end of the first lap, ahead of teammate Proctor, but the pair had forward ambitions.

Racing up the order, Smiley quickly dispatched of Ollie Jackson (Motorbase Performance) and Adam Morgan (Triple R Racing with Mac Tools) to take a comfortable third in the independent standings, by the half-way point of the race. Similar progress from Proctor allowed him to leap three places in as many laps.

With just six laps to go, both drivers were running inside the top eleven, proving the raw pace of the Hyundai i30N’s. Unfortunately for Senna Proctor a technical failure brought an end to a superb team debut.

A brief safety car was called, after Nicholas Hamilton beached himself in the final chicane’s gravel trap, giving Smiley an opportunity to close the gap to the leading pack. A damaged tyre stack would further delay proceedings, setting up a three-lap sprint to conclude the seasons maiden event.

The bright blue Xite-sponsored Hyundai immediately made his presence known, running side-by-side with seventh place Sam Osbourne (MB Motorsport) who was now slowing up the pack. It was a titanic battle for the multiple-podium finisher who crossed the line in eighth for EXCELR8’s best ever result. Immediately doubling the points that the team had recorded all last year, securing their first-ever Independents podium.

The incredible eighth place finish in race one for Smiley meant, for the first time, EXCELR8 Motorsport would have to deal with success ballast. The 28-year-old though was smart, defending his line and remaining inside the top ten after a tough first lap.

His progress was halted by a Honda Civic Type R sandwich. Adam Morgan, ahead, was clearly struggling with pace, holding up a large train of drivers behind and compromising Smiley’s battle. A crash behind brought out the safety car bunching up the field and giving the #22 another chance to attack.

His progress though was once again held up by another slower car as he diced with Ollie Jackson while holding off World Touring Car Independent champion Tom Chilton (BTC Racing). His efforts rewarded him with 12th across the line, picking up a further fourth points. More incredibly, this marked another milestone, with EXCELR8 recording their first back-to-back overall points in BTCC.

Amazingly, the number 12 ball was drawn out of the hat for the reverse grid, ensuring EXCELR8 Motorsport could now add pole position to its rapidly growing resume. A lack of ballast as well would further help Chris Smiley’s chances, though the championship front-runners would start behind.

It would be Smiley’s old nemesis Ollie Jackson who leaped ahead of the Credo Asset Finance-sponsored Hyundai before Redgate. A safety car for a spun Jack Butel (TripleR Racing with Mac Tools) and upon the restart, set about pressuring the new leader, while simultaneously defending from multiple-race winner Josh Cook (BTC Racing). Smiley was feeling in tune with his Evolution-backed Hyundai i30 making the lunge into the Old Hairpin to reclaim the lead with ten laps remaining.

Championship challenger Ash Sutton would blast into the lead a few laps later as Smiley continued his outstanding work to hold off Josh Cook and Adam Morgan for the EXCELR8 teams maiden overall podium.

Proctor meanwhile easily proved the raw pace in the Hyundai challenger, gaining 11 places from the back, the most of any driver in the third race, up until the final lap, after a mistake saw him drop out of the points.

After his incredible podium, Smiley said;

“It’s a dream come true! To turn up here with a brand new car, brand new team, brand new team of guys around me, to come away with a second place and really be on the money, it’s one of those drives that you’ll remember. I just let myself down at the start, as I have not figured out how to get the Hyundai off the line.

“A big thanks to EXCELR8, Draper Tools, Cranswick Foods and Titanic Distilleries, you know, without these guys, this isn’t possible for me, so I really used my head today.

“Ash [Sutton] has been on fire all day today, I knew with the pace he was catching there was no point in getting involved in the battle with him, so I let him go so I could guarantee second place. We also had a great battle with Josh which I really enjoyed. It’s been a fantastic day for me, EXCELR8 and the all-new Hyundai i30 N Performance car.”

“Donington was an amazing start to our season. I am really proud of the whole EXCELR8 Motorsport team for the work they’ve done over the break to not only get the new Hyundai i30 N Performance prepared, but also step up our game out on the race circuit. The podium was a fantastic way to ignite our season and I hope we can only build upon the achievements we have recorded already.

“From already surpassing our 2019 points tally, the front row start in race three and the work done by Chris Smiley to bring home the silverware, I could not be more proud. It’s a quick turn around now for Brands Hatch in under a week’s time, and I’m confident that the team can continue the momentum that our supporters have entrusted us with. Of course, none of this could be possible without the backing from Draper Tools, Evolution, Xite, Cranswick, Third Millennium, Rocket, Titanic, Driven, Scorpion, Credo Asset Finance and Forge.”