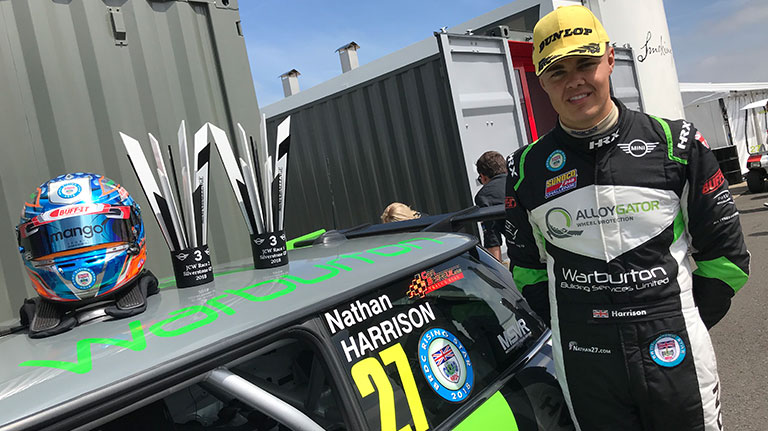 Nathan Harrison led the line for Excelr8 Motorsport at Silverstone during a weekend when all seven drivers overcame dramas.

Harrison’s weekend was epitomised by two podium finishes, boosting his championship ambitions. But the story ran a bit deeper than that.

After qualifying second for race one, Harrison engaged in a tense battle for the race one lead with both Jordan Collard and Ant Whorton-Eales, eventually sealing third place. However, the team investigated a lack of straight-line speed and traced the issue to a failed suspension damper, which was changed for race two.

With his car patched up, Harrison was set for a solid shot at victory in race two. But the outing was heavily truncated by incidents, leaving just a single-lap sprint to the flag. Harrison was unable to improve on third, but took solace in two podiums.

“It’s a shame because I feel we could have done something good in race two,” he said. “But it’s still solid points and Excelr8 worked hard to find the issue from race one.”

The team also had its hands full with both David Robinson and Luke Reade’s cars. Reade qualified a strong fifth – second of the Excelr8 cars – but was punted out of race one, with his car sustaining heavy damage and also making contact with Robinson on its way off the circuit.

Robinson had already been hobbled by intermittent fuel pump issues that limited him to 11th after that bruising outing.

The team worked late into the night to repair Reade’s car, and he repaid them with 11th in race two. “I bought the lads a few crates of beers to say thanks because they did a magic job,” said Reade. “The entire front of the car was bent after the contact. It was gutting as we were on for a good result.”

Both Jac Maybin and Ollie Pidgley enjoyed strong opening races, finishing fifth and sixth respectively. But both were denied a shot at race two by damage incurred during a tangle on the warm-up lap.

Taelor Shand took 20th place in race one, while Stuart Gibbs recovered from a mighty spin at the high-speed Abbey corner to take 22nd. Both drivers also suffered bad luck in race two, each retiring with damage.