Sam Osborne to make his BTCC debut with EXCELR8 Motorsport 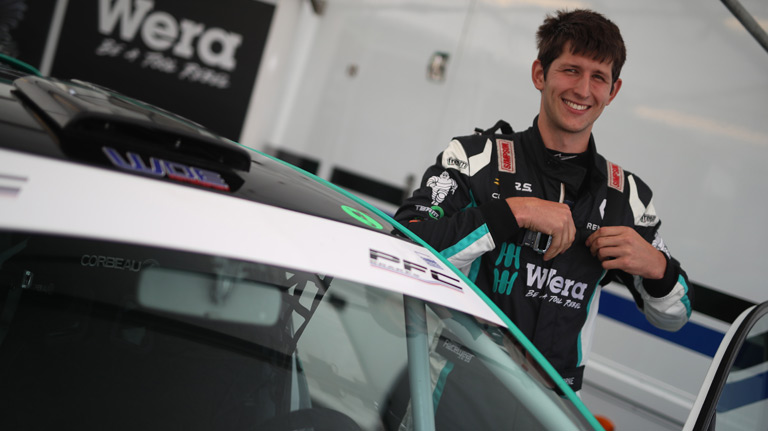 Sam Osborne to make his BTCC debut with EXCELR8 Motorsport

Osborne, 26, will graduate to the BTCC off the back of competitive seasons in both the Renault UK Clio Cup and MINI CHALLENGE championships, during which he learned the ropes of tin-top racing.

The Rotherham-based racer established himself as a regular top-10 challenger within the Clio Cup across the last two seasons with the WDE Motorsport team, and prior to that he formed part of EXCELR8’s line-up within the MINI CHALLENGE JCW Class.

Having been a two-time winner during his maiden car racing season in the 1.6-litre MINI CHALLENGE Cooper Class in 2010, Osborne carried that success into the forced-induction JCW championship, finishing fourth overall in the championship for two consecutive years, the second running with EXCELR8 in 2012. From there he dabbled in Radical racing, before returning to front-wheel-drive competition in the Clios.

Osborne will join fellow MINI graduate Rob Smith at EXCELR8 and is hopeful that rekindling his relationship with the team can help him learn quickly during his first BTCC campaign.

His MG6 GT will bear the colours of primary sponsor, Wera Tools, as well as backing from Tool Maniac and The Green Group logistics.

“This deal to join the BTCC with EXCELR8 is absolutely mega and something that I’ve dreamt of for a few years now.” said Osborne. “During my racing career I’ve always looked for chances to move up the ladder and the BTCC is the absolute pinnacle of saloon car racing in the UK. It will be a privilege to be a part of it.”

“I feel my time in both the Clios and MINIs has prepared me well for the BTCC. My first test in the MG6 is coming up soon, and I’ve heard a lot of things about the way British Touring Car drive compared to the feeder classes. I think my time racing the JCW MINI will be very relevant, as many say it’s close to a touring car experience. There’s obviously a lot more adjustability in the touring car, so we’ll be learning about setup a lot this year.”

“I think it will be a learning year all round for us. I know EXCELR8 well from my time in the MINI CHALLENGE, and I’ve raced against Rob Smith for a few years, too. However, the MG6 GTs will be a new challenge to both the team and us drivers. But we all work well together, so I expect us to be able to put together a solid debut season. Personally, I want to get myself into the thick of the grid as soon as I can, and then look to start fighting for places in the top 10 and see where we can go from there.”

EXCELR8 team manager Oliver Shepherd added: “We’re delighted to confirm that Sam will join us for our first season in the BTCC, and as a team we’re now raring to get going with both our drivers confirmed.”

“Sam is a known quantity to us, and he showed great potential during his first spell with us in the MINI CHALLENGE. Between Sam and Rob we have two drivers we know well already, and we know they will gel with the team incredibly quickly, and I think that’s a vitally important aspect when starting up in the BTCC from scratch. With our pre-season testing programme due to get underway soon, we’re all very excited for the season ahead.”