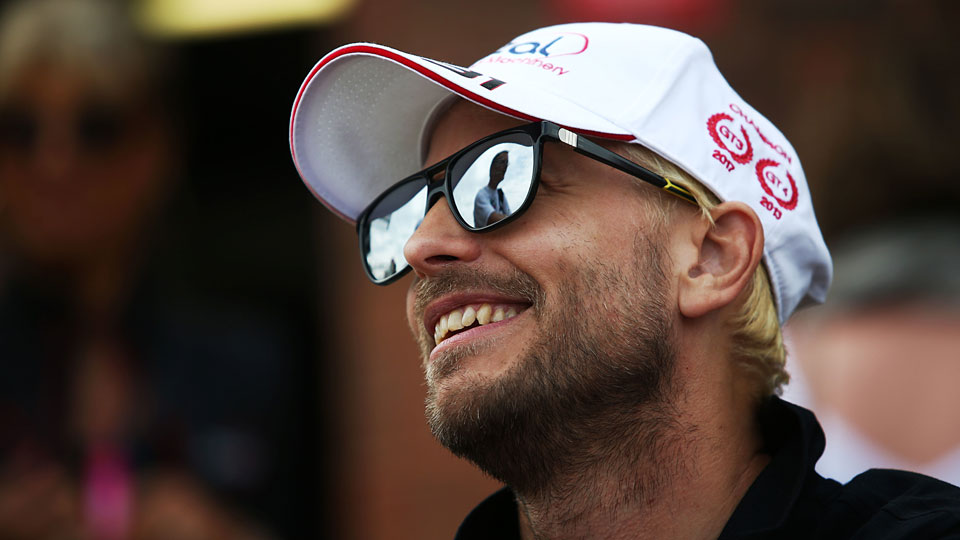 The 46-year-old will be embarking on a new and exciting challenge in his motorsport career when he makes the switch into Britain’s premier racing series, and completes EXCELR8 Trade Price Cars’ four-car line-up alongside Tom Ingram, Chris Smiley and Jack Butel.

A successful karter in his early years, Rick followed in his fathers footsteps by launching a career in the music industry with his group – The RPJ Band – becoming firmly established as one of the top events bands in the world.

Having long held a passion for motorsport, Rick jumped at the opportunity to return to the track after being invited to take part in the Celebrity Challenge race at the 2010 running of the Silverstone Classic – which he promptly won having qualified on pole position.

That reignited the desire to compete and led to Rick relaunching his racing career in 2011 with a move into the Ginetta GT5 Challenge, which in turn opened the door to a switch into the British GT Championship.

Bringing a touch of rock and roll to the race track, Rick lifted the GT4 title in 2013, and then became the first – and so far only – driver to add the overall GT3 championship, which he secured at the wheel of a Bentley Continental GT in 2017.

That success saw Rick being recognised for his performances on track by the BRDC, whilst as winner of the Sunoco 240 Challenge, he was given the chance to race on the support bill for the famous 24 Hours of Daytona.

Having taken the decision to sit out the 2020 season in order to undergo surgery for Crohn’s disease, Rick joins Suffolk-based EXCELR8 Trade Price Cars in the best physical shape of his career to date, and with a firm desire to entertain BTCC fans on track in the same way he entertains on the stage.

His first run in the Hyundai i30 N Fastback will come in due course, with a pre-season testing programme having been put in place ahead of the opening rounds of the year at Thruxton in early May.

Like second-year team-mate Jack, Rick will be eligible for the Jack Sears Trophy this season, with the award only open to those drivers without an overall BTCC podium to their name.

As an ambassador for Crohns and Colitis UK, Rick will use his programme this year to raise awareness for the charity, and to show that the illness shouldn’t be seen as a barrier to anyone in achieving their dreams.

Rick Parfitt Jr, EXCELR8 Trade Price Cars Hyundai i30 N Fastback, said:
“I’m massively excited about the prospect of moving into the BTCC with EXCELR8 Trade Price Cars for 2021. When I was younger, I used to sell advertising in Motorsport News and Autosport and was a huge fan of the series, and it’s amazing to now have the opportunity be part of the grid myself. It’s a chance to live the dream.

“After undergoing major surgery for my Crohn’s disease in early 2020, the last twelve months have provided me with a chance to get myself in better physical shape than ever before, and I hope to use this season to show people in a similar position to me that Crohn’s shouldn’t be a barrier towards doing anything that they want to do in life.

“Throughout my career in the music industry, I have loved the opportunity to go out and entertain people, and entertainment is what British Touring Cars is all about. There is so much energy and buzz around the series and even before doing this deal, the reaction from fans to the possibility of me racing has been fantastic. I can’t wait to be part of it all, and to help put on a show.

“I’m under no illusions about how tough the BTCC is going to be, but I’m more than ready for the challenge that lies ahead. In EXCELR8 Trade Price Cars, I have a good team around me and in Tom Ingram in particular, I have a team-mate who I can learn a massive amount from. There is no point entering a series like this thinking it will be for single year, so I want to learn as much as I can this season with an eye on then pushing for the Jack Sears Trophy in 2022.

“Having not raced a car since 2019, I want to go out there and have fun this year – and try to kick some ass along the way!”

Justina Williams, EXCELR8 Trade Price Cars team owner, said:
“I’m thrilled that we have been able to conclude a deal with Rick for 2021 as he was the person who I really wanted in the car to complete our new-look driver line-up.

“Alongside Tom Ingram, Chris Smiley and Jack Butel, we now have four drivers that I feel give us a fantastic chance to make the season ahead a success both on and off the track.

“Rick’s performances in the British GT Championship in recent years have been hugely impressive, particularly when you consider the competitive nature of the field. I’m looking forward to seeing him develop as a touring car driver this year, and am confident that he will be able to make his mark on the BTCC as the season goes on.

“As a born entertainer, I have no doubt in my mind that Rick is going to a hugely popular addition to the team, and to the series, and hopefully this will be the start of a long and successful partnership together.“