Raw pace on display at Brands Hatch for EXCELR8 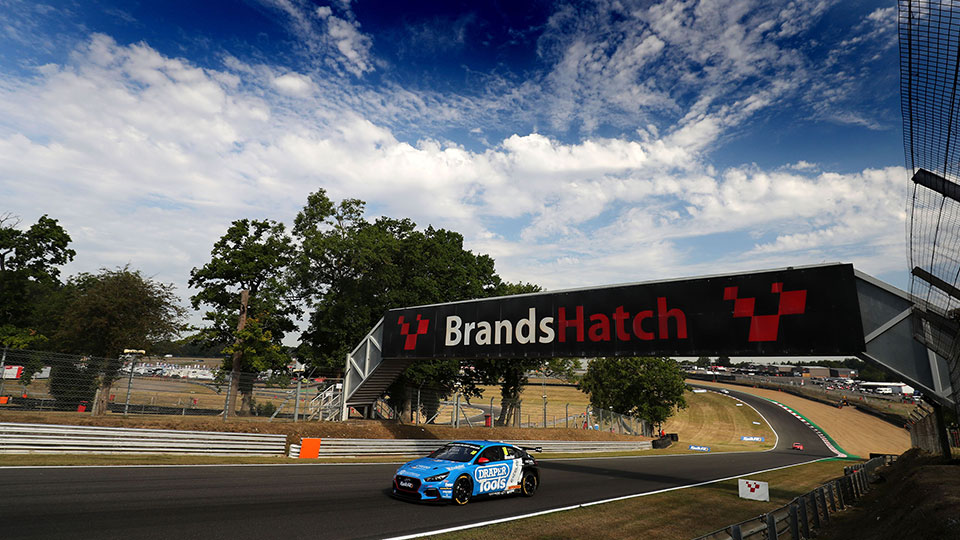 Raw pace on display at Brands Hatch for EXCELR8

Solid points and exceptional pace were the highlights of a sweltering Brands Hatch weekend for the EXCELR8 Motorsport team. The British Touring Car Championship quite unusually visited the Grand Prix circuit during the height of summer, an unusual position for many teams who are used to ending the season on this layout in the cooler Autumn temperatures.

The Hyundai i30 Fastback N Performance was a prominent front runner during Saturday running, with Senna Proctor and Chris Smiley both picking up points for the Draper Tools-sponsored squad in their quest for greater success.

Proctor proved to be one of the fastest drivers on track on Saturday, translating the pace on Sunday to pick up 24 of the teams 28 points this weekend. Smiley would also impress with his drives through the field in race 2 and 3 proving his overtaking ability on such a high-speed track and helping the team to their first ever double points finish.

Chris Smiley twice jumped into the top three during early stages of practice. Not to be out-done, Proctor became the first Hyundai under the 1:33 mark. By the time the red flag was waved, Proctor was up to third. The latter stages of first practice were dedicated to long-runs, Proctor completing more laps than any other driver. He’d finish the session fourth with a 1:32.975, only 0.24 behind pace setter Jake Hill with Smiley 12th overall with ballast.

It would be more similar story in FP2 as Proctor again challenged Hill for top spot. The Yorkshireman continued to improve his run, setting a best of 1:32.727 to go 3rd overall and lift the spirits heading into qualifying.

Heading into qualifying, momentum was on Proctor’s side, briefly topping the Independent runners during his second run. Track limits would catch out several top drivers including the Hyundai pair. As the Goodyear Tyres wore on, many were unable to improve, Proctor being one of the last to set a faster lap and end the session 7th, just 0.416 seconds behind Polesitter Rory Butcher (Motorbase Performance). Smiley, who was hampered by the 24kg of weight on board would line up 15th on the grid.

An exciting start to the BTCC weekend saw Proctor expertly take avoiding action from Tom Oliphant (Team BMW). Consequently, he lost a few places, but was not prepared to hold back, immediately closing in on the battle for seventh with Tom Ingram proving the cork in the bottle for the Scorpion-sponsored Hyundai. Smiley meanwhile was struggling with the extra ballast on board yet was still able to show off his defensive prowess.

A crash later involving Aiden Moffat would bring out the safety car, bunching up the field. Proctor was quick to act on the restart, diving past Saturday ace Jake Hill, gaining another as leader Rory Butcher picked up a puncture. Crossing the line, both drivers had fought back to claim EXCELR8’s first ever double points finish.

It was a full reset for the EXCELR8 team in race two as Proctor and Smiley once again started seventh and fifteenth. Any hope of Smiley joining his teammate were dashed after he was pushed into the gravel at Sheene’s curve. A safety car reset the gaps after only a handful laps giving Proctor and Smiley another opportunity to head forwards in the Credo-sponsored Hyundai’s.

Smiley may have been down, but he was not out, fighting back two places on the first lap of the restart, as Proctor was again stuck in a long queue, this time behind race one podium finisher Ollie Jackson. Despite strong pace, 24kg of weight hampered Proctor’s momentum, crossing the line an admirable 8th.

Despite having fallen to 26th and last, Smiley proved the skill that had rewarded the Draper Tools-sponsored machine with a podium at Donington, gaining 13 places to finish 13th, inside the points and ahead of his original grid spot, proving the raw pace the Northern Irishman would have had, if not for his opening lap skirmish.

Smiley’s remarkable race two recovery was made bittersweet after the top twelve were reversed, one place in front of the Hyundai. The reverse positions had gifted Proctor with fifth on the grid, but unfortunately got tangled up with Jack Goff (RCIB Insurance) at the start, dropping him outside the top ten.

Meanwhile, the forward-thinking Smiley was making light work of those around him, quickly scything up to seventh in only the opening few laps. He was far from done though, working the Evolution-supported team all the way up to fourth, into the independent class podium places. Sadly, A rare driver error where Chris clipped a kerb harder than usual causing him to spin and hit the barrier with two laps to go, scuppered what would have been an incredible result.

Hope was left with Senna Proctor, who despite his skirmish fought back from fifteenth to finish ninth during a race of attrition at Brands Hatch, finishing just 15 seconds behind the race winner while carrying ballast.

“Our first double points finish with both Hyundai’s, what an achievement! The speed shown by Senna during qualifying underlines raw pace the team has been able to produce since the start of the season and Chris’ drive through the field in race two and three are testimonials to how easy this car is to mix it with the front-runners.

On a day in which the higher temperatures affected our rivals, I am proud of the EXCELR8 team for the work they have put into the car to make it race worthy. Unlucky for Chris Smiley at the end after such an amazing drive, both him and Senna Proctor have proven that we can be a regular threat for silverware throughout this season. We’ve now got a 2-week turnaround before the next one, giving us a chance to further improve on the package we’ve got.”

“I made a mistake, caught the kerb on the exit of Sheene curve, putting a wheel on the grass. We’re racing with such fine margins and I apologise to the team after all their work, especially after we got the car up to where we need, I tend not to make mistakes.

What I showed in race three was genuine pace. I was very happy with the whole team, especially Danny King my engineer for doing a good job to get us back into contention.”

BTCC returns to racing on 22-23 August at Oulton Park.