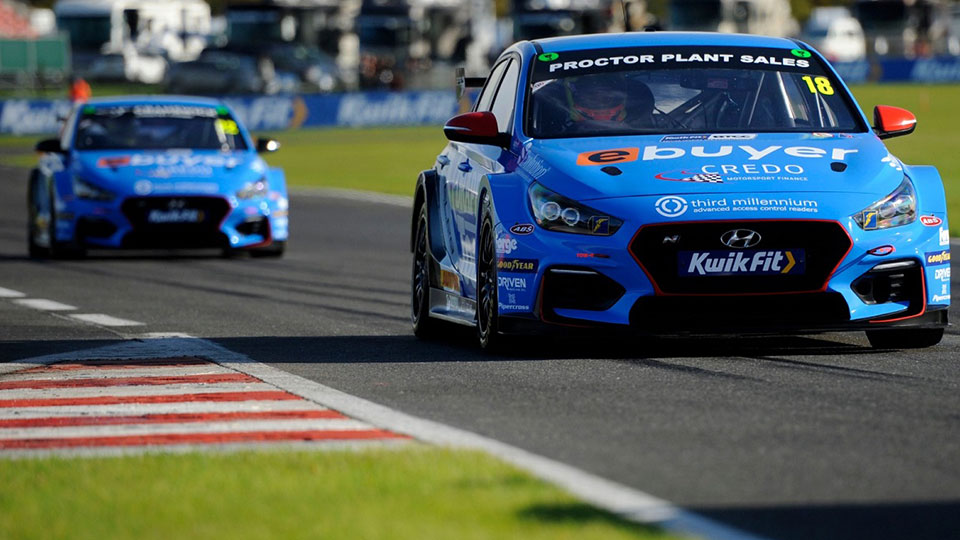 Returning to their home circuit of Snetterton the Suffolk-based team would at last enjoy a circuit in which they had previous data for the Hyundai i30 Fastback N Performance cars, newly partnered with eBuyer,  giving them both a new lease of life. Threatening the top ten in qualifying the Forge-sponsored EXCELR8’s would only narrowly miss out on the new-for-Snetterton Top 10 shootout.

The climax for the weekend came in race three when Smiley was drawn for reverse grid pole. Holding strong throughout, the Northern Irish driver was cruelly punted out of a top five finishing having entertained the ITV crowds throughout the race.

A new Saturday format gave many of the drivers a clean slate to work with. A single 50-minute practice session gave both Senna Proctor and Chris Smiley a chance to prove themselves, and eager to demonstrate, Proctor briefly topped the timesheet.

Focusing on all aspects of setting up the car, Smiley still managed to get within 0.4 seconds of third place, setting a personal best of 1:58.496 after an improvement in the dying minutes. Proctor meanwhile was similarly setting his lap at the dead, under the 2-minute mark around the longest circuit on the calendar, with both drivers confident ahead of a unique qualifying. In total, the Hyundai’s headed into the key session with 35 laps of data.

Both Smiley and Proctor remained locked together as all drivers looked to aim for that crucial tenth place during the unique qualifying that saw the session split into two parts.

Proctor remained on the bubble throughout, spending the middle of qualifying a tantalising eleventh. The benchmark would drop throughout the final 5-minute splash, with Smiley temporarily joining the top ten. With just thirty seconds to go, a final blast from Proctor brought him crucially into tenth, only to be knocked back in the dying moments. Smiley lined up a promising thirteenth.

Avoiding the collision into the first corner, both Senna Proctor and Chris Smiley leaped into the top ten on a slippery Snetterton. Smiley’s early action saw him dice with multiple-race winner Josh Cook (BTC Racing). The result was Smiley needing to put on an incredible defensive display to hold position in his eBuyer branded Hyundai.

Having got past Smiley, Cook would catch and pass Proctor, who was playing the long game, focusing on bagging consistent points for the EXCELR8 team. A strong opening race saw Proctor cross the line in ninth as Smiley spent the event dicing with Michael Crees (BTC Racing) and Stephen Jelley (Team Parker Racing) to pick up an 11th place, his best result since the dramatic Knockhill weekend. Both drivers had gained two places, proving the Draper Tools-supported cars forward momentum.

The forward momentum continued at the start of race two as Proctor leaped past Cook, taking revenge on race one. Running side by side with the #66, Proctor put on a memorable display, eventually choosing to preserve his car.

Both drivers were again battling for the top ten throughout with both defending from the charging Manufacturers behind. Smiley, with no ballast, had the advantage, overtaking Proctor to preserve a top ten finish for the Hyundai’s.

A crash for Jack Goff brought out the safety car on the penultimate lap, bringing about a 1 lap dash in which Smiley held on to his seventh top ten finish of the year, while Proctor came home a respectable thirteenth. Smiley’s tenth was vital as it meant he start on reverse grid pole for race three.

From pole position Smiley was swamped at the start, dropping a few positions, but holding his own against the series front-runners for the Credo Insurance sponsored Hyundai i30. Settling into initially into fourth, Smiley had to put on a valiant defensive display, rubbing bumpers with the manufacturers and title leaders.

Proctor was in a similar position holding his own in a chaotic midfield, crucially avoiding damage. Coming into his own in the latter half of the race, Proctor caught the battle for the top five crucially headed by teammate Smiley.

To the great disappointment of all those involved, Smiley was rammed by Dan Cammish (Team Yuasa Halfords) sending him hurtling into the barrier in a race that could have been so crucial for the Northern Irelander.

Proctor would inherit the flame for the Draper Tools-sponsored team, hounding Jake Hill (MB Motorsport) for a top ten spot. Unfortunately for the Hyundai, he was punted from behind at the same corner as Smiley, by the charging Aiden Moffat (Laser Tools Racing), crossing the line behind in 11th. Smiley meanwhile would recover to 23rd from last.

“Such a bittersweet way to end what has been a fantastic weekend for the EXCELR8 Motorsport team. We’ve been working exceptionally hard to prepare for Snetterton and we showed that step forward on Sunday, holding our own against some of the series top drivers.

“Cannot express how proud I am of both Chris and Senna for their driving this weekend, as well as the whole team who have been working with both to get them dialed in. We’ve learned a lot and I hope we can now end the year on a high.”

“We’ve made a big step forward with the car. Making a lot a changes, we’ve looked at the areas we were struggling at, so when we rolled it out for FP1, it was completely different to how I’ve had it before. The car felt really race-ready.

“It’s been a good day for me, pace wise. Thankfully the weather has held out too and it’s been quite a nice day for October. The car is a lot better, so it was only a shame that Cammish took me off in race three. We were on for a good result, but when that happens unfortunately you cannot do much more.”

“Race one and qualifying were good for us, so we can’t complain too much at the pace this weekend, it was just an anomaly in race two. That was a shame, but overall, I think we found a few little tricks in qualifying that really worked.

“We made a few changes through the weekend, but it was just trying to figure out how to improve them in the right way. The race two anomaly was because of a non-ideal setup, which we tried to make the most of, but it didn’t work unfortunately.”

“In that last race we certainly had the pace to run with the people at the front, it was just a shame how it all panned out as we lost too much ground at the start for it to be meaningful at the end.”

The final BTCC weekend of the season takes place at Brands Hatch on the Indy layout on the 14-15th November 2020.