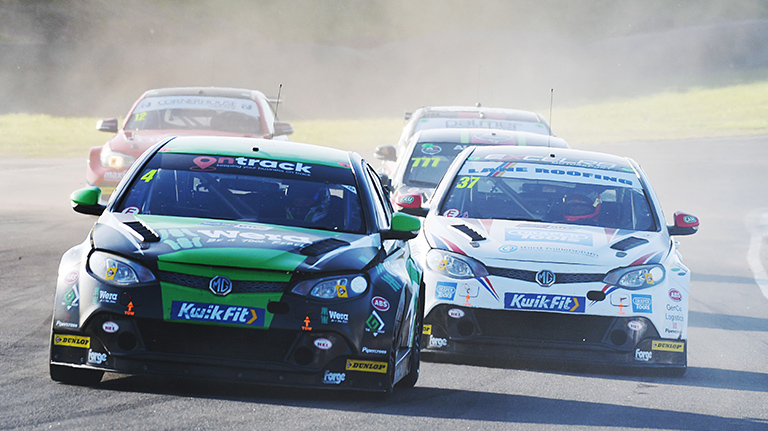 EXCELR8 Motorsport put on an impressive display in difficult circumstances during its first visit to Knockhill last weekend for the eighth round of the British Touring Car Championship.

The Scottish track is about as unique as BTCC venues come, with its tight and twisty nature making it a rollercoaster of a lap, and meaning it presents a tough engineering challenge for teams to find a suitable balance to make cars both stable and fast. Experience plays a big part in both car and driver competing towards the front of the grid. For drivers Sam Osborne and Rob Smith – both new to the Fife venue – the focus was more on developing the MG6 GTs to deal with the challenge ahead.

Practice was therefore all about getting up to speed and learning their new surroundings. Knockhill’s lap demands a lot of kerb-riding to find the best times, so much of the work from the crews went in to making the MGs soft enough to handle the extra bumps, yet nimble enough to negotiate the tight hairpins and fast kinks that make up the lap.

Both Osborne and Smith used the two free practice sessions to learn both the track and their cars. But, in sessions where just one second separated the top 24 drivers, even slight improvements would make a big difference.

While Osborne finished the second practice session more or less happy with the handling of his car, Smith endured something of a frustrating day as the setup changes made between FP1 and FP2 did not deliver the improvements he was after.

Getting a clean lap on a circuit measuring at just 1.266 miles was a difficult task for both drivers, leaving them disappointed to qualify 28th and 29th. But, if anything, their grid positions actually played into their hands at the start of the opening race on Sunday.

Osborne and Smith made up a handful of places during a chaotic first lap of the race, as Mike Bushell, Nicolas Hamilton and Michael Crees all encountered trouble at McIntyres. A further incident between Matt Neal and Ash Sutton handed the EXCELR8 duo another two positions, while mechanical woes for Rob Collard, Stephen Jelley and Ollie Jackson ensured Smith would finish 21st, with Osborne right behind. For the first race at a brand-new venue, finishing on the fringe of the top-20 was a result not to be sniffed at.

Race two was a totally different story as those who suffered in the first race were keen to make their way through the field. Osborne and Smith sensibly remained focused on their own races and again stayed out of trouble, with Smith battling to 22nd and Osborne taking the flag in 25th after a tight battle with Mark Blundell and Hamilton.

The final race of the weekend completed a successful maiden outing at Knockhill, and produced an entertaining on-track battle between Osborne and Smith, with the pair ending up 22nd and 23rd, and with both drivers’ lap times getting within that magic second of the front-running crew, all of which boasted significantly more experience and data for the circuit. It showed marked progress from the team.

Rob Smith said: “For our first time at Knockhill, this weekend was all about a learning process, playing with the setup and looking to get some more knowledge of the car, which we were able to do as the weekend progressed. Unfortunately, we weren’t quite able to hit the ground running setup-wise as I was struggling a bit with the handing of the car over the kerbs, especially at the Chicane. The races were a lot better though and both Sam and I kept our noses clean and were within striking distance when things went wrong for the guys in front of us. We are always making improvements to the car and our race pace on the medium tyre in race one showed actually that we can mix it with the rest of the field.”

Sam Osborne said: “We all knew it was going to be a tough weekend, having never raced here and never even driven here. It was an eye-opener but definitely one to remember for me. Practice was all about getting a good benchmark for us to build on over the weekend and I think when you look at the times from Saturday through to the final race on Sunday, there was a real improvement as I got more comfortable in the car on what is a very challenging, but enjoyable track. I was lucky to get really good starts in the races, had good pace and was involved in some nice battles with Rob in race one and then Nicolas [Hamilton] at the end of race two. It’s three clean races, which is what we wanted to achieve on our first visit here”

EXCELR8 Team Manager Oliver Shepherd added: “A really positive weekend for the team and the drivers. Knockhill is a relatively short track, and there are only a few corners here anyway but the ones that are here are quite challenging. Considering where we’ve come into the weekend experience-wise, I’m actually really happy with how it has gone. The guys were happy with the car, we’re looking in the right direction and the times were good. The cars responded well to the different sets of tyres and the boys raced well, making places throughout and getting to the finish, which a lot of other drivers failed to do, so it’s been a good weekend.”

The next round of the Kwik Fit British Touring Car Championship takes place at Silverstone National Circuit over the weekend of September 28/29.