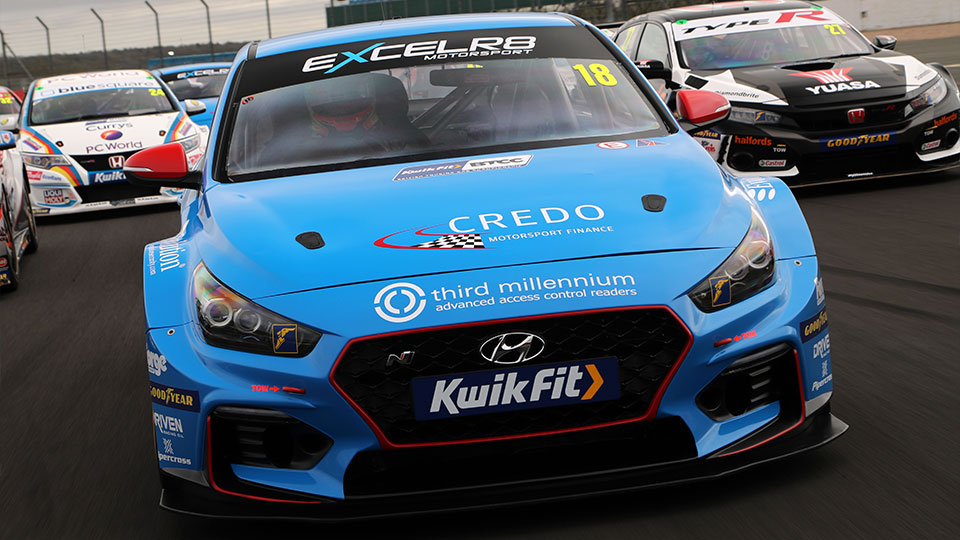 EXCELR8 Motorsport demonstrated the significant progress it has made over the winter, as well as the potential of the all new Hyundai i30 Fastback N Performance, during the official BTCC season launch event held at Silverstone on March 17th.

Following an encouraging shakedown of the new machinery at Snetterton, the Suffolk based squad arrived at the home of British motorsport feeling confident of making a significant step forward for its second season competing in the UK’s premier championship.

After presenting the team’s striking new brand image to the media, drivers Senna Proctor and Chris Smiley took to the circuit to continue their development programmes and evaluate a range of setup combinations, completing a combined total of 134 laps.

With further potential yet to be unlocked from the Hyundai, the team will now make use of the delayed start to the BTCC season (see below) to continue its test and development programme to start the season in the best possible position.

We apologise for being late to issue this message, it has been due to planning for government COVID-19 directives.

Statement from TOCA Regarding COVID-19

On March 16th the government introduced updated coronavirus directives. These included asking citizens to avoid all non-essential social contact and non-essential travel, as well as advising of the withdrawal of the provision of emergency services to mass gatherings.

TOCA of course completely respects the government’s directives. The health of our entire nation – not just the BTCC’s competitors, fans, marshals, officials and personnel – is of absolute importance. Accordingly, the start of the 2020 BTCC must now be delayed and we therefore advise the postponement of the first three events:

Clearly the COVID-19 situation is ever-changing and incredibly challenging for everyone. It is the firm intention of TOCA to run the full season of ten events and they will work closely with the circuits and stakeholders in order to reschedule new dates for all postponed events.

These will be confirmed and announced when there is further clarity regarding the eventual resumption of major sporting events.