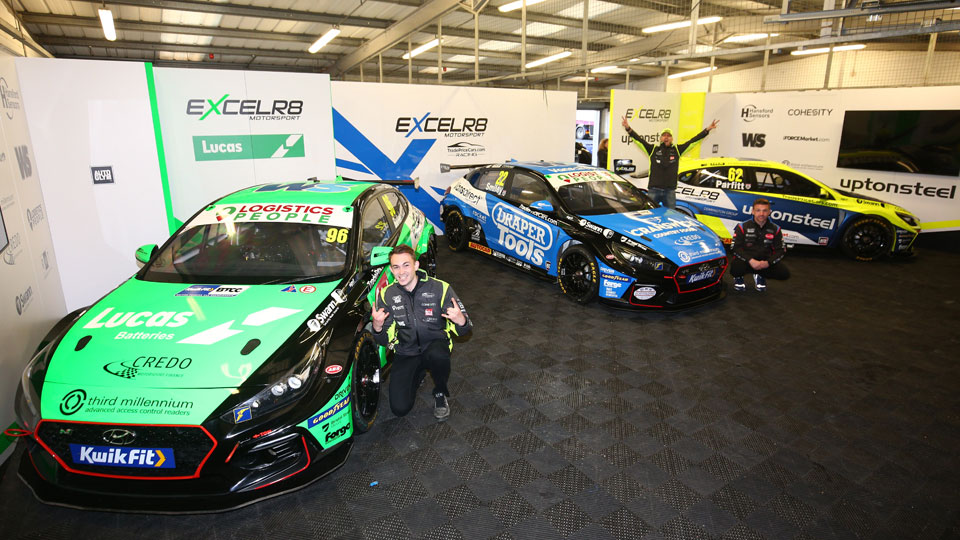 The new look EXCELR8 with TradePriceCars.com team put in a solid performance on track as it officially launched its 2021 Kwik Fit British Touring Car Championship season programme at Silverstone.

The Suffolk-based team headed for the Home of British Motorsport ready to see how it matched up against the rest of the capacity field, with the traditional season launch featuring the only official test of the winter.

Having revealed the dramatic new livery on the cars of Chris Smiley, Jack Butel and Rick Parfitt on the evening before the test, all four of the EXCELR8 with TradePriceCars.com Hyundai i30 N Fastbacks then hit the track for six hours of official testing spread across two sessions.

A busy morning session saw Tom Ingram in his Ginsters EXCELR8 with TradePriceCars.com entry leading the team’s challenge with the sixth quickest time, having completed an impressive 55 laps, with team-mate Chris in 20th spot in the Draper Tools-backed car, albeit with a time that was only three-tenths of a second slower.

On the EXCELR8 with TradePriceCars.com side of the garage, an encouraging morning for Jack saw him lap just a tenth of a second behind Chris, whilst touring car newcomer Rick managed to set a time within a second of the outright pace as he continued to learn the ropes in a front-wheel drive touring car.

The afternoon session saw three of the four drivers improve their times, with the team electing to focus on its own programme rather than chase a headline quick time.

Tom would again be the quickest of the quartet as he ended up fourth on the timesheets, improving his lap time by three-tenths of a second compared to the morning running. Chris also improved by a similar margin, which resulted in him ending up just outside the top ten.

Although a minor electrical issue delayed his programme during the afternoon, Jack managed to break the 58s marker to end the day in 24th overall, whilst Rick was set to post a comparable time on his fastest lap in the afternoon before the engine on his car went into limp mode, although the former British GT champion remained pleased with the progress made across the day.

The team will head to Brands Hatch next week for the final day of pre-season testing prior to the opening meeting at Thruxton on the weekend of 8-9 May.

Chris Smiley, #22 Ginsters EXCELR8 with TradePriceCars.com Hyundai i30 N Fastback, said:
“I’m really pleased with today as we have chipped away at things throughout the day and have taken a massive step forwards. We have improved in key areas, particularly with the traction off the two main corners, although our tyre strategy means we didn’t really show our hand in terms of the ultimate lap time. The car now is night and day different from last year when we were here, and I’m looking forward to getting few more laps in at Brands Hatch to refine things ahead of the opening round.”

Rick Parfitt, #62 EXCELR8 with TradePriceCars.com Hyundai i30 N Fastback, said:
“I have loved today. The learning process was brilliant as I started the day with limited laps under my belt but I feel a lot more confident now and can start to look at the times. We went way more aggressive on the set-up of the car so I’m closer to what Tom is running, and I seem more at home with the car being a bit more loose. It’s obvious there were some games going on with what people were running in terms of tyres and weight, but I was on old rubber all day and could have done a 57.9 before the engine went into limp mode, which would have put me in the mix. That’s really good progression for me and i’m happy with how things have gone.”

Tom Ingram, #80 Ginsters EXCELR8 with TradePriceCars.com Hyundai i30 N Fastback, said:
“It’s been an interesting day as you always get people who run the soft tyre late on and take the weight out, so it’s hard to see where everyone really sits. On our side, the car felt good and was doing everything I wanted from it so you can’t really ask for more than that. I think that is the quickest I’ve been round Silverstone so I’m happy with how I’ve performed today, and our testing as a whole has gone well at all the circuits we have visited so far. It looks like being a quick year based on what we have seen today and it’s certainly going to be close, but I feel we’re in a good position as a team as we look towards the first round.”

Jack Butel, #96 EXCELR8 with TradePriceCars.com Hyundai i30 N Fastback, said:
“We had a bit of a mixed afternoon after the electrical issue, but overall we’ve made a lot of changes and adjustments today and have made a huge amount of progress. We’ve had some really good days so far with the car and I hope that we can have another solid outing at Brands Hatch next week to build on what we have learned so far. The car is a huge step forwards from what I raced last season and I feel at home with the team already; I can’t wait for the season to get started.”

Justina Williams, team owner, said:
“As a team, we have always put a lot of time and effort into presentation and this season is no exception. Having already shown off Tom’s car, we’re proud to have now reveal the eye-catching colour-schemes that Chris, Rick and Jack will be running this season, and I think all three look fantastic. Today has been a really productive day for all four drivers and we have been able to collect a lot more data that will be beneficial when we get to Thruxton for the opening rounds.“