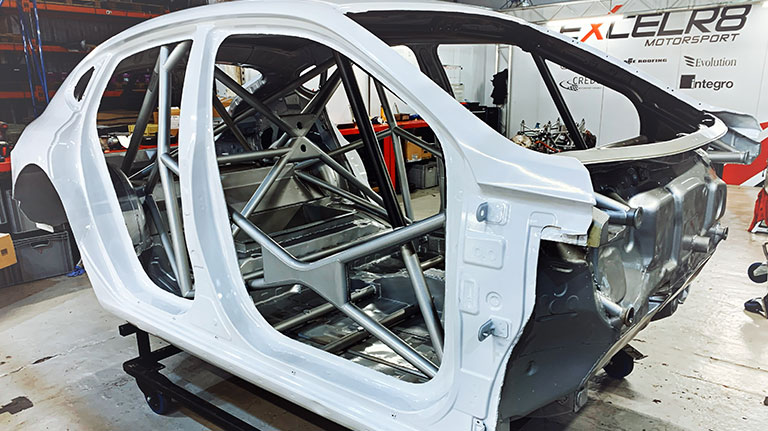 As part of EXCELR8 Motorsport’s new frontier of talent, the Suffolk-based team is proud to announce the signing of multiple-British Touring Car Championship winning engineer Kevin Berry. Heading up their engineering team, he will also be working with new driver for 2020; Senna Proctor.

Joining him will be Danny King, who will oversee race winner Chris Smiley’s car, while Marvin Humphries continues to lead the outfit as Team Manager after his invaluable work during their maiden BTCC campaign.

Berry has been working in the British Touring Car Championship since 1999. During his time in the series, he’s worked for Triple Eight Racing, guiding them to eight manufacturer’s and six driver’s titles during his thirteen years on the Vauxhall Vectra. It was during this period at VX Racing that Kevin first got into contact with EXCELR8 Team Manager Marvin Humphries.

Since 2013, he’s worked for West Surrey Racing, culminating in a second and third driver’s championship for Colin Turkington in 2018, where as a result of his efforts, he was awarded the BTCC Engineer of the Year. He has since gained experience with Cyan Racing Lynk and Co in the WTCR.

Kevin Berry said; “I’ve already been involved in some of the development of the new car during the winter. This year I’ll be helping EXCELR8’s race engineering as well as with the driver on the car.”

“We’ll be working with Senna before the events to plan what we do with the development and setup. During the race weekend, I’ll be maximising the driver’s setup and working relationship with the team. Aiding and improving the car throughout the season, I cannot wait for the first round.”

An experienced team manager in his own right, Marvin Humphries has previously flourished during stints at WSR and Eurotech as well as his own Tech-Speed Motorsport team. Recently liaising with Willie Poole Motorsport who have built the Hyundai shells, Humphries is turning his attention to the season opener at Donington Park next month. One of the series most experienced faces, with over four decades experience, he is confident of a strong season ahead and working with a new team.

“Kevin first worked for me at Tech-Speed and was Colin Turkington’s engineer for a number of years when I was team manager at West Surrey Racing, so I’ve known him as a friend and it’s fantastic to have him on board. To strengthen the outfit to this extreme is promising.

It’s an exciting time for the team with the new car and the new driver line up. I’ve been in this game a long while and it’s quite exciting to bring the team here from where we were last year, building a new car with a new manufacturer, I’m really looking forward to it. The season is not far away now so we have to crack on.”

“This role is something you still get a buzz out of, considering the package we have in 2020 it should be quite exciting.”

Team Principal Oliver Shepherd is delighted about EXCELR8’s new era, as they prepare for their first season racing the brand-new Hyundai i30 Fastback N Performance. Overseeing the engineering, as well as the team across TOCA, Shepherd will play a key role in the development of a new winning formula.

Shepherd said; “Having Kevin on board is going to be a great thing. I’ve spent a bit of time working with him now over the winter period just on the car build and design. Right from day one it was clear how much he knows about these cars and how much experience he brings. I’m feeling really confident that with Kevin alongside the drivers we’ve got, it should be a race winning combination.

“Danny King is an extremely experienced engineer who will be heading up the other car alongside Chris Smiley. King is more than knowledgeable, with history in ELMS and automation. Working alongside Kevin’s experience in Touring Cars, the two of them will have some great results.

“Keeping them all on the straight and narrow will be Marvin. From the new engineering talent throughout EXCELR8 to our team managers, this year is looking very strong, so I’ve got some high expectations of them all.”

The new era for EXCELR8’s journey in the Kwik Fit British Touring Car Championship begins at Donington Park on the 28th March.