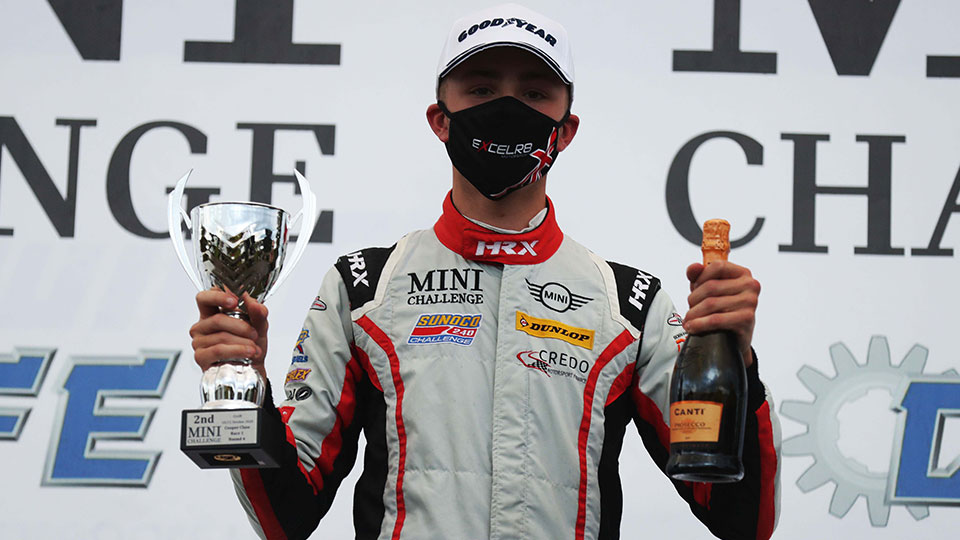 Second generation MINI CHALLENGE racer Josh Porter will remain with EXCELR8 Motorsport for a third season as he chases title glory in the Cooper Class in 2021.

Following in the footsteps of his father Tim, Josh first joined the grid back in 2019 and secured multiple wins in the Am category en-route to fourth in the class standings.

That strong rookie season was followed by an equally impressive second year in the series in 2020, where the talented teenager stepped up to the main class.

Once again running with multiple champions EXCELR8, Josh bounced back from a tricky start to the campaign at Oulton Park to become a regular front-runner and would secure four podium finishes across the shortened, eleven race season.

That meant Josh ended the year fourth in the championship standings, just two points away from the top three, and he now heads into 2021 looking to launch a challenge for the championship crown.

“We had good pace last year and performed well in qualifying, which translated into a number of podium places and fourth in the championship,” he said. “We know that we have a good set-up on the car and have plenty of data to work with, so I’ll be working closely with the team to find the extra few tenths that we need this season.

“The championship looks like it is going to be very competitive again with a capacity grid, and I feel ready for the challenge. I’m also looking forward to – hopefully – being able to race in front of the crowds when we support the BTCC later in the year.

“This is a big season for me and I hope that it will be a stepping stone towards potentially moving up into the JCW championship in the future.”

Team owner Justina Williams welcomed the news that Josh will once again be part of EXCELR8’s multi-car entry into the Cooper Class for 2021.

“Over the past two seasons we’ve seen Josh mature a lot as a racer, and he produced some impressive drives last season after stepping up from the Am category,” she said.

“With two years of experience now behind him, we fully expect him to be a contender at the front during the year ahead and I’m excited to see what he can achieve on track in 2021.”

The 18 round MINI CHALLENGE Cooper Class season will get underway at Snetterton in late April, and includes three meetings as in support of the British Touring Car Championship.