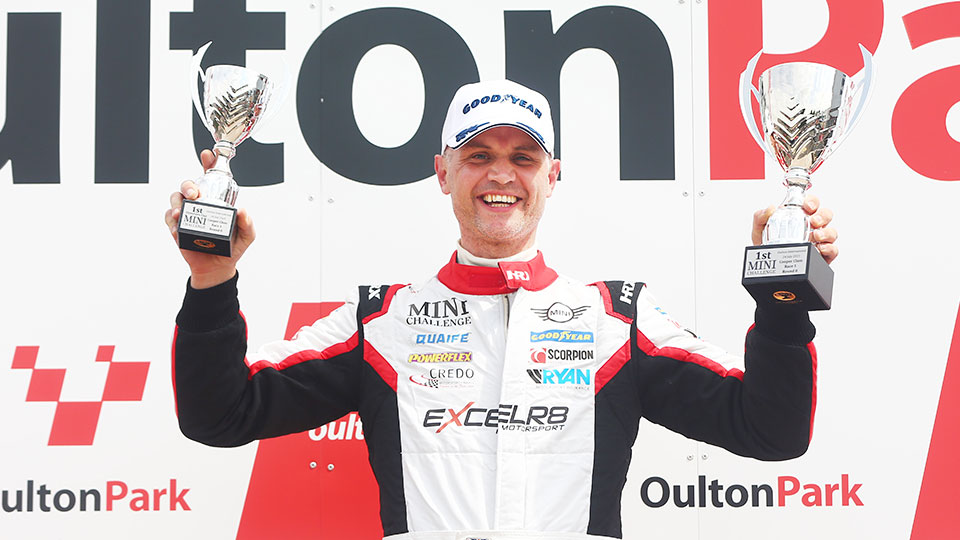 Former Cooper Class Champion Matt Hammond will seek to secure a second Quaife MINI CHALLENGE title after confirming his place on the grid for the 2022 campaign.

Having been forced to take a sabbatical from racing following his title winning campaign back in 2017, Hammond returned to the grid last season after inking a deal to join forces with EXCELR8 Motorsport; the same team that carried him to his championship crown.

Despite his time away from active competition, Hammond showed he had lost none of his speed from the outset as he stormed to pole for the 2021 season opener at Snetterton and followed it up with victory in the opening race of the campaign.

Further wins would follow at Thruxton, Brands Hatch and Oulton Park to leave Hammond with more victories than anyone else in the series, although a number of unfortunate incidents in the middle of the season would ultimately derail his title challenge.

Having initially hoped to graduate to the JCW class, Matt will instead return to the Cooper category looking to become only the second driver to win the title more than once, having agreed a new deal to continue as part of the EXCELR8 line-up..

His title challenge will get underway this weekend at Pembrey, with the first of seven planned meetings – three of which will be alongside the British Touring Car Championship.

“I really wanted to try and make the move up to the JCWs for this season but for a number of reasons, it didn’t happen,” he said. “I’d put my Cooper up for sale and wasn’t going to race but then this deal has all come together late in the day thanks to the support of my main sponsor Metric, who have helped to get me out on track to challenge for the title.

“I didn’t always have luck on my side last year and there were a few incidents that cost me dear when we got to the end of the season. However, my pole positions and wins showed that I had the pace, with the lap record in the final round at Silverstone really driving that home.

“We’ll need to see how things go, but I’m racing to win this season. I know the car is good and I know the team is good, so I can’t wait to head to Pembrey to get started.”

Team Owner Justina Williams welcomed the news that Hammond will remain in the driving seat for 2022.

“Matt has been a valued member of our off-track team for a number of years and it was fantastic to see him back behind the wheel last year,” she said. “It was like he had never been away and it was only down to bad luck that he wasn’t able to secure a second title.

“He clearly has the speed to fight for the title this season, but will also provide vital experience in our Cooper line-up, and we know he will have a big part to play in how the championship is decided during the year ahead.”