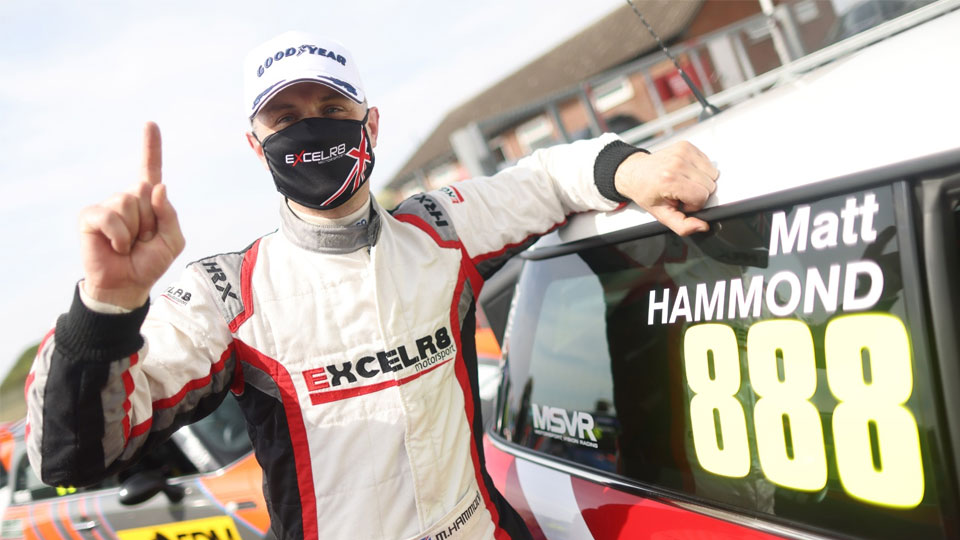 Matt Hammond enjoyed the perfect start to his Quaife MINI CHALLENGE Trophy campaign with a lights-to-flag victory in an action-packed opening race of the season at Snetterton.

The former series champion had earlier qualified his EXCELR8 Motorsport-run car on pole position and was able to make his advantage count in the opening 15 minute encounter, which would be brought to a premature end as a result of a clash in the chasing pack.

When the lights went out to kick off the first race of the year for the Cooper class field, Hammond got away well to lead the field into Riches for the first time but there was a change for position behind, with rookie Lewis Saunders making the most of a slightly slow from front row man Dominic Wheatley to grab second spot.

Page slotted into fourth from Lee Pearce, who managed to battle his way ahead ahead of Nicky Taylor through the opening corners to run in sixth.

Aware of the need to break the tow from the cars behind if he wanted to convert pole into a race win, Hammond played a tactical game through the opening lap to try and get the pack behind embroiled in a battle and it worked to perfection heading into lap, with Wheatley getting a run on Saunders going into turn one as he looked to take second spot.

Although unable to make the move stick there, Wheatley managed to slide down the inside into Agostini to go second only for Saunders to them come back at him through the infield.

Saunders went for the outside line through the right-handers at Oggies and Williams and headed onto the back straight drawing alongside Wheatley, but the squabbling pair then had to contend with Page putting his car three-wide as they blasted down towards the bridge and the left-hander at Brundle.

With the inside line into the corner, Saunders was able to reclaim second spot, whilst Page also managed to get ahead of Wheatley as the trio then turned right through Nelson – the fight between the trio delaying them enough to give Hammond breathing space out front.

Behind, Pearce and Taylor were drawing in on the fight for second, with defending champion Harry Nunn working his way up into seventh spot having dropped a spot on the opening lap, and Josh Porter also reclaiming his starting position – the pair getting ahead of Alex Jay who had cleared them on lap one.

Page managed to get ahead of Saunders on the third lap as Wheatley started to put pressure on the pair, and – with Hammond clear up the road – the battle for the podium finishes was building towards a huge crescendo going into the closing minutes of the race.

Heading into lap five, Saunders managed to get up the inside of Page into the hairpin with Wheatley also managing to sneak past the privateer on the exit of the corner. That left Page down in fourth spot, albeit only after he managed to keep Nunn at bay on the run down to Agostini.

Wheatley then launched his bid for second going through Nelson and forced Saunders wide onto the grass on the exit but before he could try and reclaim the position, Nicky Taylor and Morgan Wroot – battling towards the lower end of the top ten in a train of cars – came together on the run to turn one.

Both cars slid into the barriers on the outside of the circuit and with Taylor’s car then coming to rest back on the racing line, the decision was made to scramble the safety car, with officials then calling the action to halt given there was only little more than a minute left on the clock.

As per the regulations, the result would be rolled back to the end of lap four, leaving Hammond to take victory ahead of Page and Saunders, with Wheatley the unfortunate one to lose out as he reverted back to fourth spot.

“That was pretty much perfect,” winner Hammond reflected. “I knew I needed to try and break away from the pack behind so on the opening lap I tried to back them up so they would start squabbling. Then I just got my head down and went for it. The car was great once again and this is a brilliant way to start the season.”

For Page, second spot capped an impressive start to his comeback, with the season opener being his first race in the series for some six years – his decision to race only coming with a week to go to the actual meeting.

“It’s unbelievable to be back racing again and this is a great result,” he said. “I hoped we could be towards the front this weekend but I didn’t believe a podium was possible, even though luck was on our side a little bit with the red flag.”

Saunders was equally happy to take third given his preparations for the weekend with the family-run 298 Motorsport team hadn’t gone to plan on Friday after a technical issue with his car left him off the pace and the team with work to do to resolve the problem for race day.

“I’m over the moon with that after yesterday,” he said. “[Dad] Ralph and Chris have really grafted to get the car right and it was a really enjoyable race. It was good to get involved in some real scraps, and hopefully in race two we’ll be able to take the fight to Matt a bit more.”

Outside the top four, defending champion Nunn was classified in fifth spot as the leading Graduate Cup runner ahead of Pearce, with Alex Jay and Louie Capozzoli; the latter posting the fastest lap of the race as he came through the midfield squabbles from 16th on the grid.

Aside from Taylor and Wroot, there were problems in the race for LDR Performance Tuning pair Brendan Fitzgerald and Joe Wiggin. Wiggin’s race ended at the start when he pulled off at pit exit, and Fitzgerald dropped out after running off track on lap three.

The top eight on the grid are reversed for race two, meaning Capozzoli will line up on pole.