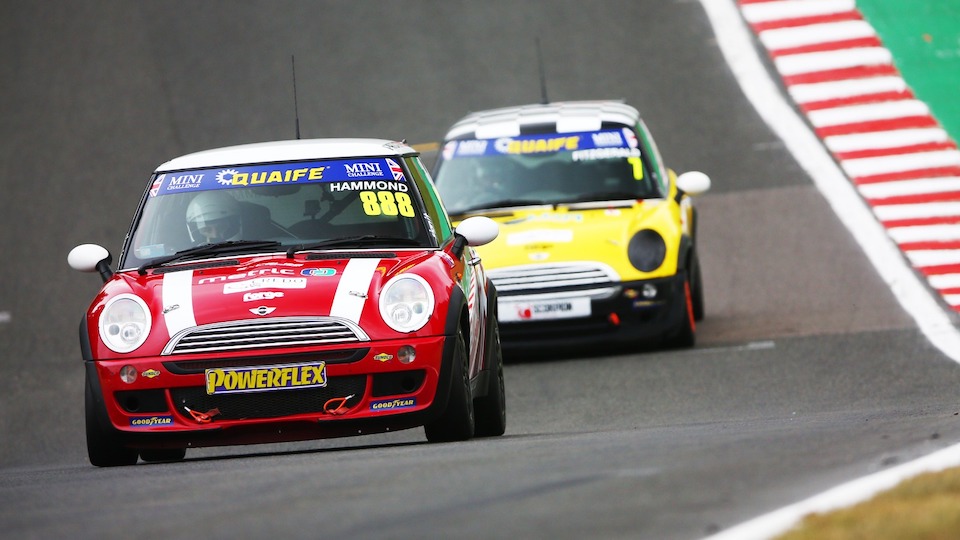 The EXCELR8 Motorsport driver had faced a busy six week spell after the previous meeting at Brands Hatch having been forced to build up a new car after the car that had taken him to the championship lead was written off in an accident during race two in Kent.

After a mixed day of testing on Friday, Hammond would emerge as the man to beat in qualifying, although it was closest rival Dominic Wheatley who set the early pace, becoming the first driver to drop into the 2:04s for PerformanceTek Racing.

Wheatley then improved on his lap next time around before Nicky Taylor briefly hit the front, only for Hammond – on his third flying lap – to then set the first 2:04s lap to go seven-tenths of a second quicker than team-mate Taylor.

As others improved to bring that gap down, Hammond improved his time again in the closing stages of the 15 minute session, with a best time of 2:03.427 being good enough to earn him pole position.

“The team at EXCELR8 has done a great job on the car and has worked long hours to get it together,” he said. “I’ve had support from a new sponsor in Metric Group who have helped with the time and support to get the car together and I’m super pleased to come here with a nice shiny new car and put it on pole.

“We tried to keep as many of the non-broken bits from the old car that we could, even down to the dash – but there was a quite a lot that was broken! We managed to get a good shell but every car is slightly different and feel a little different, so it’s just been a case of getting my head round it.”

Behind Hammond, Charlie Mann maintained his own impressive run in qualifying as he secured a front-row start in his Mann Motorsport-run car.

Mann had qualified third for the previous two meetings at Thruxton and Brands Hatch, but celebrated a new sponsorship deal of his own with his best performance of the year to date, setting a best time 0.148s down on Hammond in second.

As a result, he now has the second best qualifying average – behind Hammond – this season.

“We only got half an hour of running on Friday to get used to the track so I’m pleased with second on the grid,” he said. “I thought the lap was good enough for pole to be honest but a front row is still a good result for us, particularly when we have a new backer this weekend in Faithfull Tools.

“They are a new brand and it’s great to have them investing in me in the tough climate there is at the moment and hopefully we can fight for a podium this weekend, and maybe get ourselves a win.”

Taylor was another driver to produce his strongest qualifying result of the season as he secured third spot on the grid for EXCELR8, with Wheatley lining up alongside him on the second row – bouncing back from losing what was then his fastest lap to a track limits infringement to improve late on.

“I’m pleased with third as this has been coming all year,” Taylor reflected. “The car felt good and I made a little mistake at turn one that cost me some time, but third is a good result. I was strong here last year and hopefully we can fight for a podium – but we’ll have to see how things go.”

Defending champion Harry Nunn slotted into fifth spot for AReeve Motorsport, with the leading five drivers on the grid covered by less than a quarter of a second – suggesting that a huge battle for the leading positions should be expected when the opening race of the weekend kicks off.

Whilst he missed the chance to test on Friday, Louie Capozzoli took sixth for LDR Performance Tuning despite a bizarre incident during the session when he put a wheel off track and flicked up a stone that then smashed the rear window on the passenger side of his car.

The top ten was then completed by Alex Solley, Nelson King, Lewis Saunders and Tom Ovenden – the latter breaking into the top ten for the first time.

The leading 13 drivers in the session would be covered by less than a second, with the only newcomer this weekend – Reece Page – qualifying in 31st place for his debut race in the series.