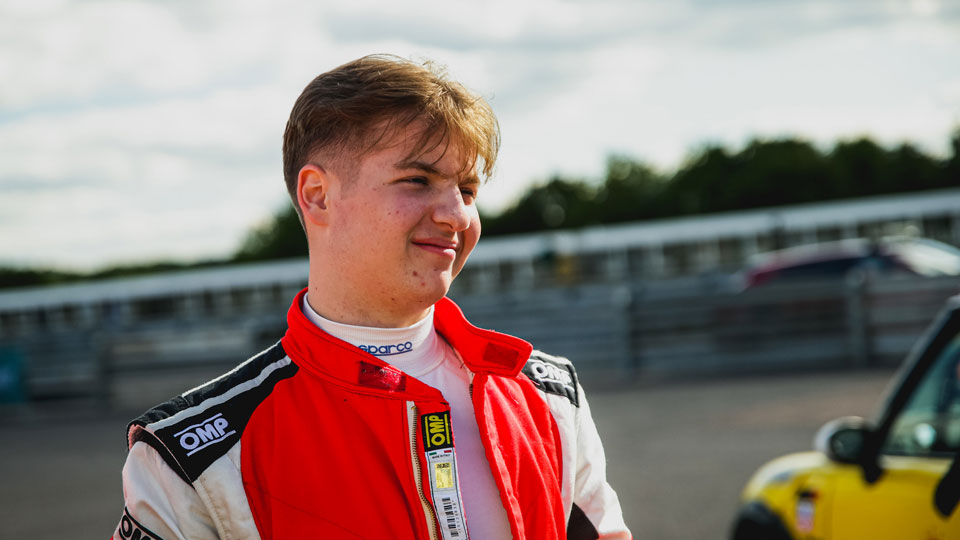 Luca Marinoni Osborne will return to the Quaife MINI CHALLENGE Trophy for a second season in 2023 after re-signing with front-running outfit EXCELR8 Motorsport.

The teenager joined forces with the Suffolk-based team for his rookie campaign, which marked his first full season of car racing after a successful career in karting.

Marinoni Osborne showed his potential during the opening rounds of the season at Pembrey, where he grabbed a top ten finish on his first weekend in the highly-competitive Cooper class, although he found himself in the wars at Thruxton in round two after a dramatic roll in the final race.

Putting that incident firmly behind him, Marinoni Osborne would gain valuable experience over the remainder of the campaign, consistently running inside the top 15 and being part of a three-way fight for second in the Rookie Cup standings.

With a season in the Cooper now under his belt – and with the benefit of a year working alongside 2021 MINI CHALLENGE JCW champion Dan Zelos – Marinoni Osborne will return for his Graduate season bidding to work his forwards up the grid to ultimately challenge for podium finishes.

Luca Marinoni Osborne, EXCELR8 Motorsport driver, said:
“I’m super excited to be back with EXCELR8 again for 2023. This year for me has been a huge learning curve and there have been mishaps and misfortune along the way, but I know I’m with the best possible team to help me progress and improve.

“It’s hard to put into words how much I’ve been able to learn from the team, and from working with Dan, and the goal now is to push forwards and try to challenge for Graduate wins and hopefully some podium finishes.

“I’ve shown top ten pace at points this year that has to be the least I aim for next year. I want to be fight for silverware and whilst I know that my expectations are high for 2023, I like to have stars I can shoot for.

“I’m lucky to have the support of a great bunch of guys and girls in the team, and i’m looking forward to seeing what we can achieve.”

Justina Williams, EXCELR8 Motorsport team owner, said:
“We’re thrilled to confirm that Luca will be part of the team again in 2023, as we know there is a lot more to come from him. Having joined the Cooper grid in what has been a particularly strong year, he has shown glimpses of what he is capable of and the key now is to turn that into on-track results next season.

“We’re confident that Luca can realise his potential next year and will be one to watch as the season goes on.”