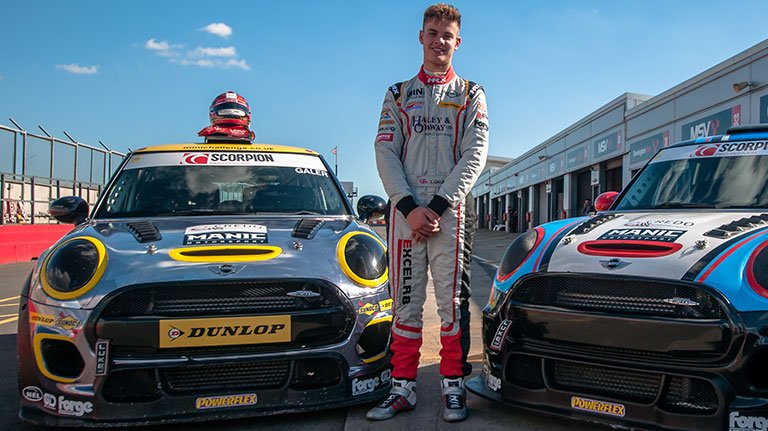 Promising teenager Lewis Galer is the first driver to sign up for the 2019 MINI CHALLENGE JCW Championship, for what will be his maiden season of car racing.

Galer, currently 15, has signed up to race an Excelr8-run 265bhp JCW for the full 2019 campaign, having decided that the MINI represents his best step toward an eventual career in the British Touring Car Championship.

The Norfolk-based driver spent many successful years competing in karting, notably at Ellough Park, before targeting a move into the Ginetta Junior Championship.

Galer finished as runner-up in the 2017 Ginetta Junior Scholarship, beating competition from 64 other young drivers to secure the runner-up spot in a final shootout at Blyton Park.

Now, Galer has switched his attentions to the CHALLENGE, and has already tested both Cooper Class and JCW machinery ahead of joining the field next season.

“I went to see a test day at Snetterton and saw a few JCWs running around and instantly fell in love with them,” said Galer. “I went to speak with Excelr8 on the day and things moved on from there. It’s massively exciting to have my plans for next year confirmed, and to be going in to such a competitive championship.

“I tested the JCW first time at Blyton Park, and then did a day of running at Donington Park recently and it’s an amazing machine to drive. It’s very different to the Ginetta Junior or anything I’ve raced before. Being front-wheel drive there are new techniques to learn, such as trail braking, and the amount of power the JCW has is amazing. It’s a real race car and you have to get on top of it and really drive it, and not let it drive you, to get the most from it. I also have to learn about racing on slick tyres.

“Next year will be a big learning curve, I have no doubt. Most of the tracks will be new to me and it’s a high level to be going in at. I have my eyes on the Rookie Cup title, which I feel is a realistic goal. Anything more than that would be a big bonus. I just can’t wait to get started.”

Multiple British Touring Car Championship race winner-turned-presented Paul O’Neill recently coached Galer at Donington Park. O’Neill said: “He’s definitely one to watch and I’ll put my neck on the line here and tell you that he’s one of the best kids I’ve ever sat next to.”

Excelr8 Motorsport team head Justina Williams added: “We are delighted to have Lewis on board, you would never guess he was only 15 years of age.  He is a great young man, presents himself well and is certainly a talent behind the wheel. I am extremely excited for 2019 and beyond, this will be a very exciting journey that the Galer family and Excelr8 can be a part of.”