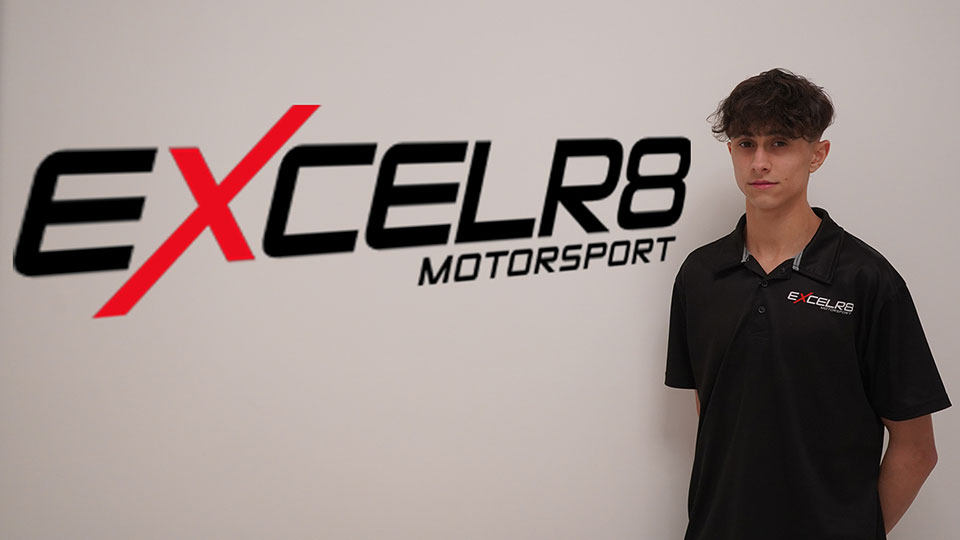 Rising star Gabe Fairbrother will take the first steps into car racing for the 2023 season after agreeing a move into the Quaife MINI CHALLENGE Trophy with the EXCELR8 squad.

The highly-talented teenage racer will join the Suffolk-based squad on the back of a successful career in karting, where he firmly established himself as a driver to watch with several impressive performances on track.

Having already secured multiple race wins in the early stages of his career, the 2022 season saw Gabe fight his way to championship glory on two fronts, kicking off with a stunning showing in the annual Kartmasters Grand Prix at the PFi circuit, where he saw off the challenge of a stellar grid of young stars to take victory in the Junior Rotax class with the Ultimate R team.

Following that, Gabe went on to secure the Junior Rotax class of the Ultimate Karting Championship, following in the footsteps of drivers such as Mercedes F1 Junior – and British F4 race winner – Daniel Guinchard.

Gabe’s decision to move into the Cooper class of the MINI CHALLENGE for his first taste of car racing comes as part of a longer-term vision to forge a career in GT competition in the coming years.

Joining forces with EXCELR8 not only provides Gabe with the opportunity to utilise the vast experience of the multiple championship-winning outfit, but also to benefit from the motorsport ladder put in place by the team to aid young drivers embarking on the early stages of their career.

That includes the chance to graduate into the MINI CHALLENGE’s headline JCW class, as well as the Porsche Carrera Cup and the British Touring Car Championship, where EXCELR8 won the title last year with Tom Ingram.

After a full pre-season testing programme, Gabe’s campaign will kick off at Brands Hatch in early April with a further five meetings – three of which will see the Coopers race in support of the British Touring Car Championship – before returning to Brands for the big finale in November.

“Obviously I’m hugely excited to be making the move into the MINI CHALLENGE with support from my long-term sponsor All Round Security, and to be joining a team like EXCELR8 for my first season racing in cars. I see the Cooper class as the ideal place to go in this next stage of my career, and even though it will be my first season, I’m going into 2023 with my focus firmly on challenging towards the front of the grid – I don’t want to be there to just make up the numbers.

“In EXCELR8, I have a team that has a fantastic reputation and which knows how to win in the championship, and it also provides options for my career going forward. It’s important for me to be able to work with a team that can help me work towards my longer-term goals and that’s exactly what EXCELR8 can do with the JCW and Porsche programmes, as well as being the defending BTCC champions.

“Having a deal signed so early means I have plenty of time to prepare for the new season, and I’ll be working hard over the winter with the team I’ve been able to build around me during my karting career – including my driver coach Aidan Lea – to make sure I’m as ready as I can be when the real action begins.

“Thanks to my relationship with LPS Management, I’m fortunate to be working with a group of people who have a proven record of helping young talent achieve the best results possible. Adding that to everything that Justina and EXCELR8 can provide leaves me hugely confident about 2023.”

“Gabe is a young driver who has shown huge potential in his karting career and we’re delighted to have him as part of our MINI CHALLENGE Trophy line-up for 2023. He clearly has the talent and the speed to go a long way, and we are hugely excited to see what he can achieve on track next season.

“Getting a deal done this early means there is plenty of time to put a proper pre-season testing programme in place and I’m sure that will allow Gabe to make a real impression in the Coopers when we get to Brands Hatch and the opening round.”