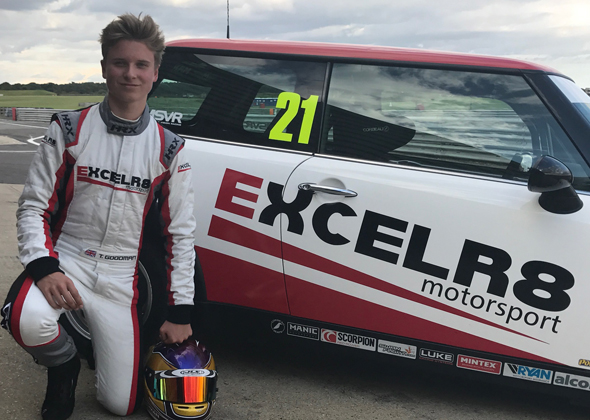 Goodman won the 2016 BirelART UK Junior class title in 2016, and also took a further three event wins during a part campaign this year.

During the course of this year the teenager has tested with Excelr8 as he weighed up a move into cars and was also a strong contender in the Ginetta Junior Scholarship shootout.

Goodman will be old enough for his senior license at the start of the 2018 season and has opted to skip the junior ranks and instead join the MINI CHALLENGE family.

Excelr8 team head Justina Williams said: “It’s no secret we have been testing through 2017 with Toby. After his performance in the Ginetta Junior scholarship last year, he was an obvious choice for our support. His testing times subsequently proved he is indeed an exceptionally promising young driver.”

Goodman said: “What an opportunity! I am so pleased to have secured a seat with Excelr8, the Cooper Pro really is an excellent race car and the Dunlop race tyres mean you get huge grip and consistency so you can set some surprisingly quick lap times. It’s a great first step out of karting and I’m determined to pay back the faith Excelr8 have shown in me with solid progress in what is a very competitive championship”

His father, Howard, added: “Given Toby qualifies for senior licence early 2018 it just made sense to skip all the Junior series and move him straight into a front running car in a high profile national series, so the MINI CHALLENGE racing in the Cooper Pro Class was the obvious choice. I’m sure he will show other young drivers moving from karts that the MINI CHALLENGE is an exceptional championship and an ideal platform to showcase their talent”