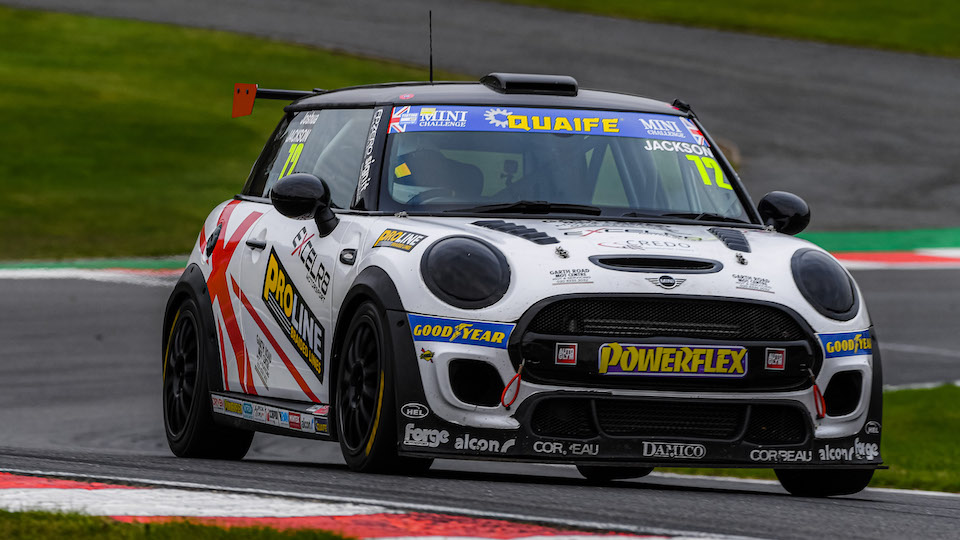 Joshua Jackson will make a full time switch into the JCW class of the Quaife MINI CHALLENGE in 2022 on the back of a successful one-off outing in the series last year.

The 29-year-old from Kent took a best finish of 15th during the season finale at Brands Hatch GP, having agreed a deal to join EXCELR8 Motorsport for his series debut.

Jackson will stay with the defending champions as he moves into the highly-competitive British Touring Car Championship series looking to add to an already impressive career resume.

Having finished on top of the pile in the 2018 BRSCC Mazda MX5 Super Series, Jackson moved into the GT Cup in 2019 and took an impressive third overall before lifting the overall championship title the following season.

After swapping his Ginetta G55 for a McLaren 570s GT4, Jackson then secured more silverware in 2021 with victory in the GTH class, whilst also finishing in the top three overall for a third successive season.

The switch to the MINI CHALLENGE will provide Jackson with a fresh challenge as he embarks on his first season racing a front-wheel drive car, with his goal being to try and work his way towards the front of the field over the course of the 20 race season.

“I was very impressed with the MINI CHALLENGE in my one-off outing last year, and it made it an easy decision when the opportunity arose to move over for a full season in 2022,” he said.

“I’m very pleased to be joining EXCELR8 for 2022. Justina and the team were very welcoming last season and I was impressed with their professionalism and knowledge. The support I received was fantastic and the results that the team has secured speak for themselves, so I’m looking forward to learning from their experience throughout the season ahead.

“The MINI CHALLENGE is the most competitive one-make championship in the UK with a host of top drawer drivers, and I’m looking forward to the challenge as I move to front-wheel drive and move over from sportscars.

“The aim for 2022 is to achieve the best results we can as I gain experience and work my way towards the sharp end of the grid. I cannot wait for the season to begin.”

Team Owner Justina Williams welcomed Jackson into the multi-car JCW line-up and predicted a strong season on track in 2022.

“Considering he had spent little time in the car beforehand, we were really impressed with how Joshua performed when he joined us at Brands Hatch,” she said. “We’re pleased to have him onboard for 2022, and I’m looking forward to seeing how he progresses over the course of the season.

“His record in the GT Cup in recent seasons speaks for itself, and with time in the car to get used to front-wheel drive, I’m confident that he can become an important part of our MINI CHALLENGE programme.”