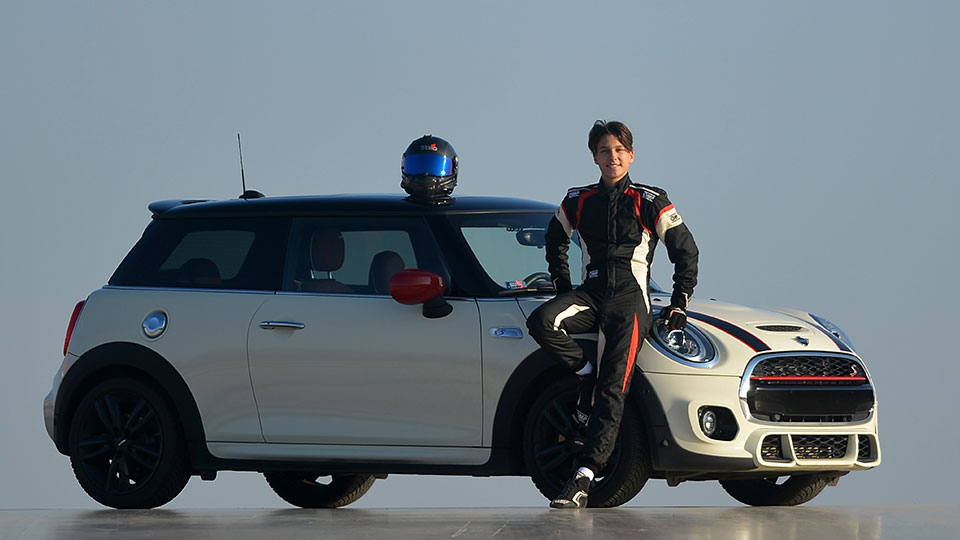 EXCELR8’s MINI CHALLENGE line-up will have an injection of youth this season when Gergő Rácz joins the team for his debut in the series.

Despite being just 16-years-old, the Hungarian driver brings plenty of experience to UK shores and will shortly get behind the wheel of his JCW car for the first time as his pre-season testing programme gets underway.

Ahead of that test, here’s a quick introduction to Gergő and a look at his career to date…

How did you get involved in motorsport?

My father, apart from being former a professional football player for Ferencváros, was also a rally driver. I went to races with him, which is where I fell in love with the sport.

I first started karting as a hobby around 2014, then we bought a racing kart, and around that time I started telling my dad that I wanted to be a racing driver. He told me that was out of the question and made me try other sports, but eventually we came back to motorsport.

What are your main achievements so far?

In the second race of my life, I finished third in the Swift Cup Europe junior classification at the Salzburgring in 2018 and was classified second in the under-16 category in 2019.

During the 2020 season, I claimed my first overall race victory at Brno before switching to a more powerful 1.4-litre turbocharged car. In 2021 I finished first at the Salzburgring and the Slovakiring before claiming a fourth place finish in the standings.

Which have been your favourite circuits that you have raced on?

The Salzburgring and the Red Bull Ring are in a tie for first place, mainly because of the setting and the good layout. I also like the Slovakiaring and the Hungaroring, especially with the 1.4 Suzuki turbo.

The Hungaroring, apart from being my home track, is one of my favourites because it has all types of corners and is therefore very demanding in terms of driving skills, so it’s a very exciting challenge, just like the Slovakiaring.

Why is the MINI CHALLENGE attractive to you?

I can develop my skills in the UK, which is one of the centres of touring car racing, and compete on legendary circuits such as Donington Park, Brands Hatch and Silverstone. Even in the midst of the coronavirus pandemic, races were still held in front of large crowds and there is a great tradition of motorsport in Britain.

What are your goals?

Which track are you most looking forward to in the MINI CHALLENGE?

The layout of Knockhill looks very interesting, and I’m looking forward to it the most. I also really like Silverstone, and based on the simulator, Donington Park is a circuit that looks very weird at first, as you have to brake very early and then concentrate on the acceleration phase.

How do you prepare for racing in the off-season?

I do a lot of sim racing, and I also race on iRacing and Assetto Corsa. Thanks to the Hungarian GTR Masters, I can compete in the Masters MINI Challenge championship every week, where we race on the real-life series venues, with a very competitive and strong field. This keeps me in the rhythm, besides training hard with Fit4Race.

How does the simulator help you?

It’s very good to practice different racing situations. There are some intense battles, and the online races remind me of real touring car racing. Minor touches are also part of the game, and you need to practice it. You can definitely learn the tracks, and during pre-season, this is the closest you can get to the real MINI.

What exercises do you do in your Fit4Race training sessions?

The team at Fit4Race features skilled coaches and physiological experts who are specialised in motorsports. I have training sessions between races and my coach is with me on-site during the races, helping me with warm-ups and concentration exercises, as well as my diet. Currently, Róbert Kathy is preparing me for the competitions in Budapest and on-site.

What has been the most important benefit of the Fit4Race programme for you?

What we have improved a lot is my ability to deal with failure, I can now let go of certain situations or bad results much faster, so I can concentrate much better on the task and situation at hand.

I watch WRC sometimes, WTCR and Formula 1 all the time. Max Verstappen is my favourite driver.

Do you have time for hobbies other than racing?

I love taking photos! I got my first camera four years ago, and I’ve been doing photography more seriously for two years now, and I’ve recently started an Instagram profile dedicated to it.