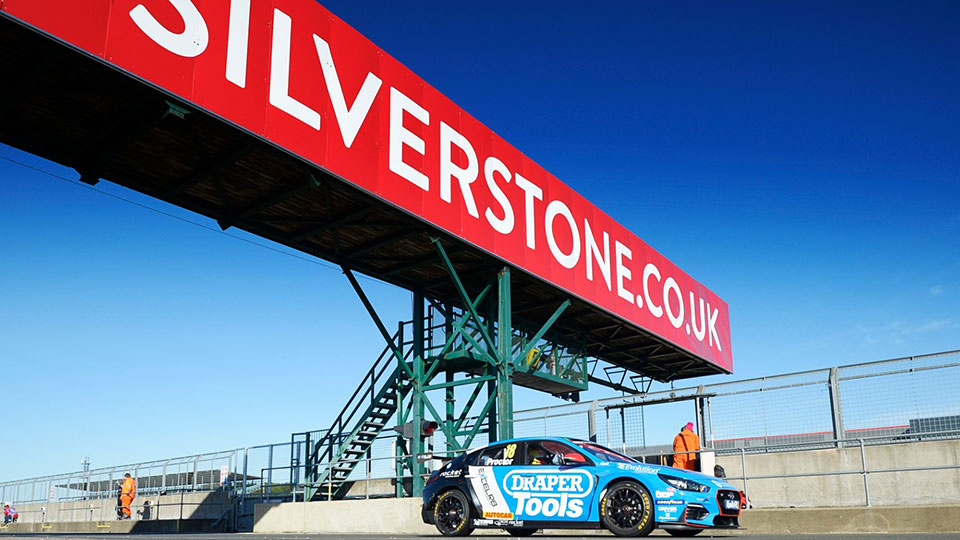 EXCELR8 Motorsport would end the sixth round of the British Touring Car Championship on a high as Senna Proctor rocketed home in the third race to take a sixth place finish, the teams best since Knockhill.

The Hyundai i30 Fastback N Performance cars were ever-improving on Sunday at Silverstone, gaining at least one position in every race they entered. The result was two double points finishes, holding seventh and fifth in the Overall and Independent Teams standings, respectively. The Evolution-sponsored squad had demostrated their prace during Friday practice, saving their best for last on Sunday.

For Smiley, his points on the National circuit reconfirm the confidence in the Hyundai as he battles, along with Proctor, for a top five finish in the Independent drivers championship. EXCELR8 leave the weekend with 177 points, further closing the gap on the Toyota manufacturer entry in the Team Standings.

As has become a habit for EXCELR8 Motorsport, Chris Smiley was one of the first to set a lap time in Free Practice, again demonstrating the team’s confidence in setting up the car. The highlight of practice came in the opening session with Senna Proctor finishing fourth with a personal best of 57.700. Had the team not been unlucky in qualifying, this would be enough for a top ten start, proving the potential of the Credo-sponsored Hyundai i30.

Qualifying would not be smooth affair for any driver as both EXCELR8’s were unable to set a lap before James Gornall (TradePriceCars) had an accident with Jack Butel (TripleR Racing), resulting in a red flag as the Audi was forced to pull off.

Upon the restart, Senna Proctor set about closing in on the top ten, striding up to twelfth, before setting himself up for a quicker lap. More bad luck would hit the pair though, with sixteen minutes left to run as the rain started to fall, preventing everyone from improving. It would be most disadvantaging for Smiley, who had just started his second run.

As the time ticked down, Proctor proved a trendsetter, the first driver to improve his lap as the rain eased. Dropping his time below the 58 second mark, he soldiered on, further reducing his best to 57.918.

Unfortunately for the Hyundai’s, a spin for Michael Crees (BTC Racing) prevented them from setting a final fast lap. The result was a less than ideal Saturday with Proctor in sixteenth and Smiley unable to crack the top twenty. As proof as how competitive the field was, just 0.843 seconds separated Smiley from pole position.

A forever forward approach for the EXCELR8 Motorsport pair was in full swing as both Senna Proctor and Chris Smiley gained a position on the opening lap. In doing so, Proctor was immediately back in the points on the 1.6 mile Northamptonshire circuit.

An early safety car to deal with the stricken Michael Crees (BTC Racing) temporarily halted their progress, but Smiley was the first to move, gaining another place shortly after the restart, for the Third Millennium-supported car. Not to be outdone, Proctor gained another two places, leaping up to 13th during his battle with Carl Boardley (Team HARD) and Tom Chilton (BTC Racing).

Smiley’s forward momentum continued throughout moving all the way up to fifteenth. In doing so, gaining five places from his race start, the equal most of any driver. Proctor would cross the line in fourteenth, a top ten in the independents, ensuring both drivers gained places and setting the Draper Tools-sponsored Hyundai’s up for a spectacular second race.

To prove the first race was no fluke, both drivers were again pushing forward, with Proctor taking a place on the opening lap, dicing once again with Chilton and Boardley. All were being held up by the limping Laser Tools Racing of Ash Sutton.

It would quickly form a queue for tenth with Smiley also in the heart of the hungry train of cars. A puncture for Sutton and race leader Tom Ingram (Toyota Gazoo Racing) would gift Proctor a top ten, allowing Smiley to move into the points.

A double points finish was a spectacular result for the Credo-sponsored pair, who scythed up the order from their grid spots, Proctor gaining four places to continue his run of top tens in successive race weekends.

Starting in the middle of the pack without a teammate next to them to help, both Senna Proctor and Smiley were unfortunate to drop a place on the opening lap, as the pair would dice with championship protagonists Colin Turkington (Team BMW) and Ashley Sutton respectively.

A crash involving Rory Butcher (Motorbase Performance) and Matt Neal (Halfords Yuasa Racing) would bring out the red flag with Butcher walking away, a testament to the safety precautions and engineering of this championship.

Proctor and Smiley would restart in 10th and 16th respectively, the former rubbing elbows with both championship leaders and three-time BTCC champion Matt Neal. Smiley meanwhile was on the move, jumping two positions in the first two laps.

The squabble for podium places benefitted the Yorkshire driver. Diving up the inside of four drivers to promote himself into sixth. The Proctor Plant Sales-sponsored Hyundai set about gapping Josh Cook (BTC Racing) for his third top six finish of the season. Smiley equally will be pleased to have continued his forward momentum finishing 13th another double points finish for the team.

“It’s a fantastic way to end the weekend for the EXCELR8 Motorsport team. A double point finish and overall top six were a deserved end to proceedings at a circuit that brought us so much success last year.

“Dicing with the Manufacturers and championship leaders proves just how race ready our car is. Watching Senna battle the likes of Colin Turkington, Ash Sutton and Tom Chilton was a justification for the whole team, while Chris storming up the order in race one shows our car is wonderfully comfortable being on the attack.”

Senna Proctor in the number 18, said;

“Begun steady, but managed to find the pace every session. One of those weekends where we struggled a little with the car, but we made good progress getting close to the podium towards the end.

“Started off with a good balance in FP1, but lost it a little when we put the new tyre on and didn’t quite have the pace I thought we did come qualifying. Though  race day, we moved forward and improved the car every single session, so we couldn’t have asked for much more.”

“I think we did a good job battling with Neal and Turkington, in the last race we genuinely had good pace, I wouldn’t have expected us to be beating them just yet. Overall a good weekend, we can hold our head high after that one and see what we can try to improve for Croft.”

The British Touring Car Championship returns at Croft in Yorkshire for round 7 on the 10-11 October 2020.