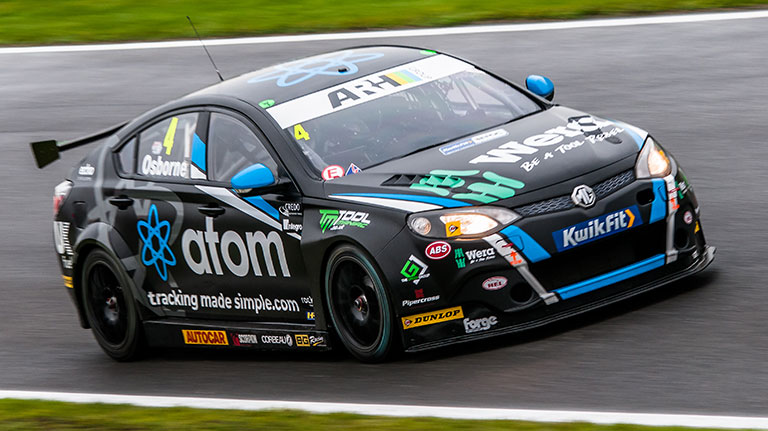 The final round of the Kwik Fit British Touring Car Championship proved a testing one up and down the grid, but the EXCELR8 Motorsport team capped its year with a trio of respectable results and showed once again why it has earned the respect of the paddock across its maiden season.

Brands Hatch’s Grand Prix loop is always a challenging circuit at the best of times, but throw in unpredictable weather and a field as closely bunched as the BTCC, and EXCELR8 was faced with one of the most demanding weekends of the year. However, the team showed its skill and tactical nous to grab two top-20 finishes. While more points eluded drivers Sam Osborne and Rob Smith, the team can still hold its heads high after a superb first season at the top tier of British motorsport.

Tricky conditions greeted the drivers on Saturday as they set about tackling the two free practice sessions. The aim for the day was to find some rear-end stability through the fast sections of the GP loop, without sacrificing the agility needed for the Indy layout at the start of the lap.

While Smith managed to log in excess of 30 laps, with his best times putting him right on the fringe of the top-20, Osborne lost half of the second session after an off at Westfield Bend, which caused light damage to the MG’s rear suspension. With that patched up, both drivers were tested by a red-flag punctuated qualifying session.

The rain began to intensify shortly before the start of the session, making wet Dunlops an easy choice. The twin MGs were just starting to find a rhythm when the first red flags came out when Matt Simpson spun his Honda at Surtees. Things got going again shortly afterward, with Smith showing impressive pace as he worked his way up in the order. However, Smith was on a much-improved lap when Andrew Jordan crashed and brought the session to a halt again, ruining any chance of improvement. Smith would start 23rd, with Osborne in 29th.

With the grid forming up on a damp but drying track on Sunday morning, tyre strategy would be the key factor for success, and the EXCELR8 team so nearly sprung a shock for the rest of the grid.

When racing got underway, Smith looked to make early progress, but lost time when he was squeezed off at Graham Hill Bend, dropping to the back. Which oddly gave the team a strategic opportunity when Simpson crashed his Honda at Paddock Hill Bend and brought out the safety car, just as the dark clouds arrived.
With light rain starting to fall, Osborne dived into the pits to switch to wets, a good four laps earlier than anybody else. With the rain intensifying, Osborne found himself as the only runner on the correct rubber, and was immediately elevated to 17th as a host of cars ahead all dived to the pits to change tyres. When racing resumed,

Osborne was on the verge of the points, and much faster than the leaders, who were struggling on slicks in the worsening conditions. Osborne looked set to mount a charge up the order, but was denied the chance to show his true pace after contact with Carl Boardley’s Volkswagen sent the MG into the gravel at Sheene Curve and out of the running. It was a sad end to a tactic that had caught the entire grid napping and could have secured the team a superb result.

With Osborne out, Smith made his own strong progress after stopping for wet Dunlops. A swift change from the EXCELR8 crew ensured Smith rejoined in 24th, and then ably worked his way into the top 20 to secure a strong start to the weekend for the team.

The track remained wet for the second outing, making tyre choice easy, but the start was truly frenetic with both Smith and Osborne being forced to pick their way through a multi-car pile-up on the first tour. Exiting Paddock Hill Bend, Michael Crees, Adam Morgan, Jack Goff and Tom Oliphant all tangled, spreading debris across the circuit.

Smith was first on the scene and managed to pick his way through nicely to run 18th, but Osborne made the best progress, climbing to 19th as the safety car was called to begin the cleanup. When the race restarted, Smith piled the pressure on Rob Collard as he began to sniff another points finish, but ultimately the Vauxhall held the spot as Smith’s windscreen soon became caked with dirt in the spray.

A few cars had opted to pit during the earlier safety car to gamble on slick tyres, which would switch on toward the end of the race when the track was at its driest. By now on worn wets, Smith fell victim first to Mike Bushell and then the slick-shod Jake Hill, but did enough to cement another impressive top-20 finish.

Osborne was unlucky not to make it both cars in the top 20, with the recovering slick-tyred Toyota of Tom Ingram managing to split him and Smith at the flag.

Race three has become something of a speciality for EXCELR8 this year, with both of its points finishes coming in the final outing. There was much promise again this time, with the circuit drying out enough for slicks, and Smith reserving the faster soft tyres for the season finale.

However, too much wheelspin when the lights went out cost Smith, who fell back to 27th, but fought determinedly to make up the ground again. Osborne ran 25th early on, before a grassy moment at Graham Hill Bend cost him a place to Smith. Once ahead of his team-mate, Smith engaged in a great back-and-forth battle with Senna Proctor’s Subaru, eventually taking the flag in 22nd. Osborne was set to shadow him to the flag, until a split wheel put him out two laps from home.

Rob Smith said: “It’s been a really challenging weekend, but overall the car has felt great and we’ve learned loads. This season has been one huge learning curve for us, but we’ve faced every challenge head-on and come through it in one piece and with some very respectable results. I was hoping for another push for points in the finale, but I just got a really bad start and was swamped, which left me on the back foot. But we had some good battles back through the field. I feel the progress we’ve made as a team has been great, and I’ll be working hard over the winter to try and ensure I can come back and continue learning next season.”

Sam Osborne said: “It’s been a very difficult weekend for me, for a few reasons, but we come away with the car in one piece and with a stack of new knowledge about racing in the BTCC. I’m gutted about race one as we absolutely nailed the call to move to wets, the team did a fantastic job to get the tyre change done and were on for a great result. But bad luck intervened at the worst possible moment. Race two we moved forwards, but race three was tough and eventually the wheel let go, which is just one of those things. I still finish the year as a BTCC points scorer, and that means a lot.”

EXCELR8 Team Manager Oliver Shepherd added: “It’s been a weekend of ‘what ifs’ really, and our luck in race one just set the tone for the rest of it. We got Sam in and the tyres changed in great time to put us on course for a great race result, and it got taken away by bad luck, but that’s this sport. Then we found ourselves a bit mired in the midfield and struggled to make progress. It’s an incredibly competitive grid, so to leave with two points finishes is still an achievement. Plus we’ve not had a single reliability issue all year with our cars, which says a lot to the huge work that’s gone into the engineering side of these cars. And let’s not forget that the MGs are the oldest on the grid. I think the whole team can be proud with how we’ve acquitted ourselves in our maiden BTCC season, and we’re already planning for bigger and better in 2020.”

The Kwik Fit British Touring Car Championship will return next season, with the opening round taking place at Donington Park, next March.