EXCELR8 with TradePriceCars.com targets return to form at Knockhill 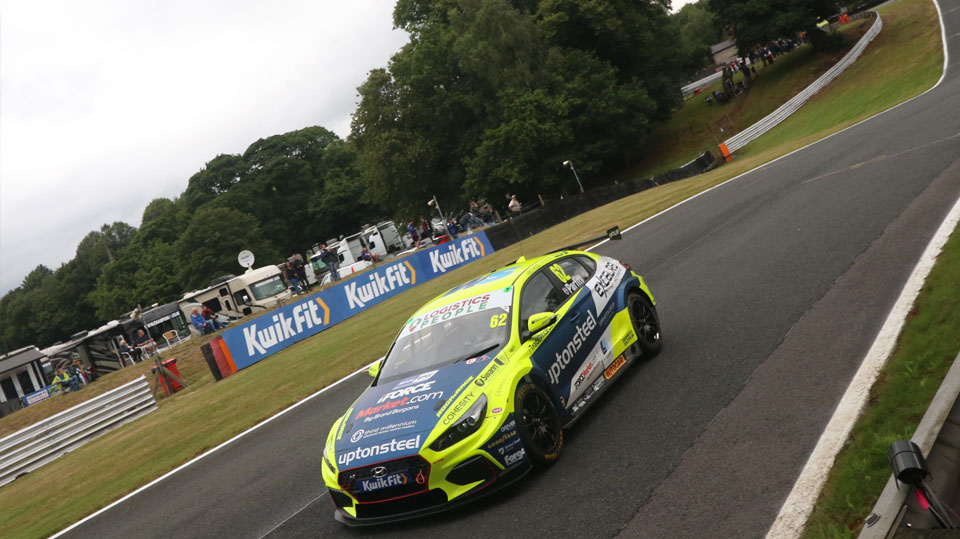 EXCELR8 with TradePriceCars.com targets return to form at Knockhill

The EXCELR8 with TradePriceCars.com team will look to return to the front-running form it has displayed for much of the 2021 Kwik Fit British Touring Car Championship season when the series heads for Knockhill this weekend for the fifth meeting of the campaign.

The Suffolk-based team makes the long journey to Scotland keen to bounce back from a challenging weekend at Oulton Park last time out, where all four drivers endured their fair share of misfortune across the three races.

Despite an issue in qualifying leaving him to try and battle his way through the field from the back of the grid, Tom Ingram was able to salvage a top ten finish on race day at the wheel of the #80 Hyundai.

Tom was also able to post the fastest lap in two of the three races to show the pace of the i30 Fastback N Performance – marking the first time that the car had set a fastest lap in the series – and was able to retain second in the championship standings.

Whilst that means he will be forced to carry plenty of success ballast into the weekend, Tom will hope to replicate the strong results he has gained at Knockhill in the past, which includes winning back in 2016 and securing a podium finish twelve months ago.

Chris Smiley was caught up in an unfortunate incident in the opening race in Cheshire two weeks ago, but recovered well in the remaining two races to pick up two point finishes, including a top ten of his own in race three.

Knockhill has been a happy hunting ground for the Northern Irishman in his BTCC career to date, with no fewer than six top ten finishes – including two last year on what was a strong weekend for the i30.

With no success ballast on his car, Chris will hope to make the most of the pace in the #22 Hyundai to qualify towards the sharp end of the grid as he looks to fight for his first silverware of the season.

Jersey racer Jack Butel will be making his second touring car appearance at Knockhill, having scored a solid top 20 finish in his debut season twelve months ago.

As had been the case at Brands Hatch, Jack showed strong race pace across the weekend at Oulton Park at the wheel of the #96 Hyundai, only to miss out on a potential points finish when he was an innocent party caught up in an accident in race three.

That clash resulted in heavy damage to his car, but with that damage repaired and Jack himself fighting fit after limping away from the incident with a sore ankle, he will hope to push for points on his longest trip of the season.

On his first touring car appearance at Oulton Park, Rick Parfitt battled back from getting caught up in the same race one incident at Chris to snare his second top 20 finish of the season as he continues to come to terms with the unique challenge of competing in the BTCC.

The double British GT champion will face a big challenge this weekend as he prepares to race at Knockhill for the first time in his career, with the tight and twisty circuit overlooking the Firth of Forth not featuring on the GT calendar for a number of years.

Having rapidly become a firm favourite with BTCC fans thanks to his enthusiastic approach to racing in the series, Rick will be bidding to try and build on his ever improving race pace to once again push for the top 20 places in the #62 entry, with the overall goal being to try and put his first championship point on the board.

Off track, this weekend will see the EXCELR8 with TradePriceCars.com team hold a special ‘Tartan Track Walk’ on Saturday evening in order to raise funds for Race Against Dementia.

Scheduled to take place at 19:30 from the Knockhill pitlane, fans are encouraged to join Chris – a Race Against Dementia champion – and the team to walk a lap of the track, with a suggested donation of £5 to support the charity set up by former F1 champion Sir Jackie Stewart.

Chris Smiley, #22 Ginsters EXCELR8 with TradePriceCars.com Hyundai i30 Fastback N, said:
“Knockhill was a strong circuit for us last season and we return this year with a much stronger car than we had then, which leaves me feeling confident that we can have a strong weekend.

“In recent rounds, we have been able to show that we have the pace to run inside the top ten and the goal now is to find that little bit extra to break into the top six and ultimately start to challenge for the podium places.

“It’s so competitive at the front this season as we have seen in the first four rounds, but the team has worked really hard to improve the car and I’m hoping to benefit from that to fight up towards the sharp end.

“Knockhill is the closest thing that I have to a ‘home’ circuit on the calendar and there is always plenty of support from the fans, so hopefully we can delivers some good results across the three races.”

Rick Parfitt, #62 EXCELR8 with TradePriceCars.com Hyundai i30 Fastback N, said:
“Knockhill is a circuit that I’ve never visited before, but it’s one that certainly looks a bit ‘Rock & Roll’ and I’m really looking forward to it.

“It’s certainly a very different track to the ones I have raced on in the past and will provide me with a big challenge, but at the same time, all of the circuits have effectively been new because of how different the BTCC car is to a GT car.

“My goal remains the same as it has in the four rounds so far, and that is to try and make sure we get a decent run in qualifying so that I can fight for that top 20 in the races. I know my race pace is improving all the time, and I want to try and benefit from that.

“I’ve always loved visiting Scotland and have had some really enjoyable gigs in the past, so I want to be able to entertain the fans just as much on track as I have done on the stage. Hopefully there’ll be plenty of Scottish members of the ‘Parf Army’ coming along to cheer me on!”

Tom Ingram, #80 Ginsters EXCELR8 with TradePriceCars.com Hyundai i30 Fastback N, said:
“As was the case heading to Oulton Park, we know we are on the back foot a little bit because of the weight we have to carry into the weekend, but Knockhill is a circuit I enjoy and is one where I have had success in the past – even when carrying ballast.

“Although we didn’t lose any places in the standings at Oulton Park, we know that we haemorrhaged a lot of points last time out, and we need to try and recover some of those this weekend, although it isn’t going to be easy.

“We have to be realistic and we can’t go there thinking we’re going to go out and win all three races, but at the same time, we know there is the potential to score some big points as the car will be strong.

“Last season, the Hyundai scored a podium at Knockhill and whilst it is still an i30 Fastback N, the car we have now is much improved. The key thing is to stay out of trouble, and then we can try to put as many points on the board as we can, regardless of what the ‘Scottish Grand Prix’ weather throws at us!”

Jack Butel, #96 EXCELR8 with TradePriceCars.com Hyundai i30 Fastback N, said:
“I’m really looking forward to going back to Knockhill as it was a circuit I enjoyed in a touring car last season. I’m feeling in a good place going into the weekend and want to try and reward the team for the effort that has gone in to repairing my car after Oulton Park.

“Knockhill is a very tight and twisty circuit so it will be important to try and qualify well, but it is a track that has quite a lot of overtaking opportunities so there is scope to try and work our ways forwards in the races.

“I’ll be fighting hard to build on the strong race pace we have shown recently and want to push for the points finish that I feel we have deserved in the last few rounds. I’m confident we can go well this weekend.”

Justina Williams, team owner, said:
“Whilst Tom, Chris, Rick and Jack are the ones who are on track representing the team and our partners, I think special mention has to go to all those behind the scenes who have worked hard to ensure that all four cars are pristine and ready to go after the incidents at Oulton Park.

“That was a challenging weekend for all four drivers, but the team back at base has pulled out all the stops, as they always do, and we can now head for Knockhill looking to put what happened there firmly behind us and challenge once again for the kind of results we have shown we are capable of.

“The circuit was one where we performed well last season and scored a podium finish, so the ultimate goal has to be at least replicate that and try to secure some more silverware to add to our growing collection.”