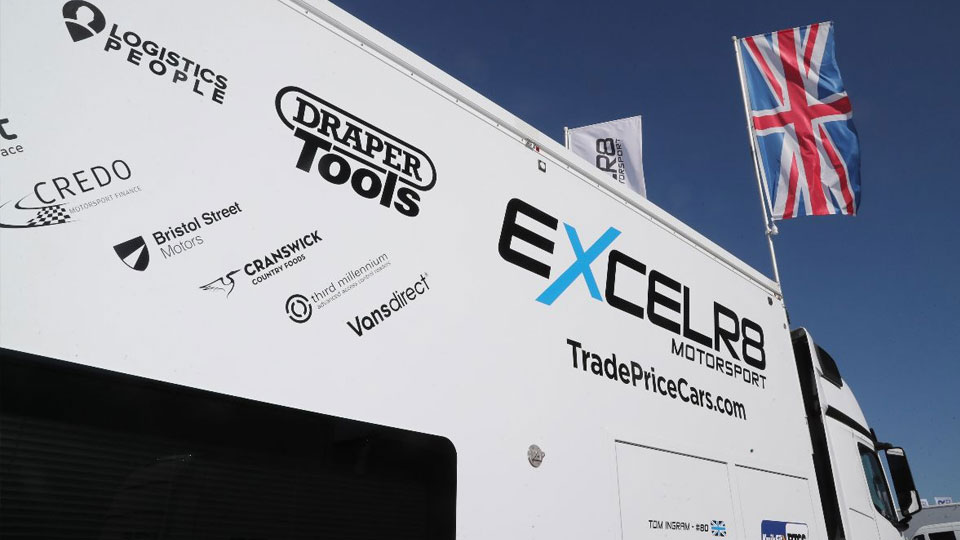 The EXCELR8 with TradePriceCars.com team will hope to build on the success it enjoyed at Snetterton when the Kwik Fit British Touring Car Championship heads for Brands Hatch this weekend for the third round of the season.

The Suffolk-based team enjoyed a breakthrough weekend on home soil two weeks ago thanks to a stunning victory in the final race of the weekend for Tom Ingram, which marked the first win for both EXCELR8 and also for the Hyundai i30 Fastback N in the series.

That win, along with a further podium finish in the opening race of the weekend, means Tom currently leads the team’s challenge in the standings, with the two-time Independent champion holding second place in the title race.

Just two points off top spot, Tom will be forced to carry additional success ballast into the weekend as a result, but remains optimistic about his chances at a circuit where he has won in the past. In fact, it was around the short Brands Hatch Indy layout that Tom secured his first ever BTCC win back in 2016.

After a tough start to his season at Thruxton, Northern Irish racer Chris Smiley picked up three solid points finishes at Snetterton, including his first top ten finish of the year in race one.

Having battled hard on track across the weekend in Norfolk, Chris heads into the third meeting of the year looking to join Tom in fighting for silverware whilst also improving on his 15th place in the championship standings; a position that means he will go into the weekend free of additional success ballast.

Series Rookie Rick Parfitt added three further race finishes to his tally last time out as he continues to gain valuable experience at the wheel of the Hyundai, although his results on track perhaps didn’t reflect the progress made across the weekend after a clash in race two cost him valuable time.

Rick – the only driver to win both the GT3 and GT4 titles in the British GT Championship – will be competing around the short Brands Hatch indy layout for the first time, with his main goal being try and continue his push forwards up the grid.

It’s a similar story for Jersey racer Jack Butel as he returns to the scene of the best weekend of his BTCC career to date, having broken into the points for the first time on the longer GP layout last season.

Jack showed encouraging pace across the weekend at Snetterton where he lapped quicker than he had ever done before and picked up three solid results amongst the Jack Sears Trophy entrants; those drivers who have yet to secure an overall podium finish.

Feeling more comfortable behind the wheel every time he goes on track, Jack will now look to try and add to the two top 20 finishes he has secured thus far in 2021, with his goal being to try and fight for a first points finish of the campaign.

With a planned lifting of COVID restrictions having been delayed, spectators will only be permitted to attend the race meeting in limited numbers this weekend, with ITV – as usual – providing extensive live coverage of the weekend.

Qualifying on Saturday afternoon will air live via the ITV website with all three races being shown in their entirety as part of extensive live coverage on ITV3, with the show on air from 11:00 right through to 18:25 on Sunday.

Chris Smiley, #22 Ginsters EXCELR8 with TradePriceCars.com Hyundai i30 Fastback N, said:
“The car is very different to last season with all the changes we have made over the winter and there has been a lot to learn, but we know what we need to work on after Snetterton. We know the car is capable of winning races as Tom showed last time out, and now I have to make sure that I extract the most from it.

“When we tested at Brands Hatch before the season started, the lap times were very promising so I return this weekend feeling positive and with a car that I know will go well. Qualifying is going to very important because of how hard it is to overtake, and I’m expecting it to be very close.

“All of our work so far has been focused on getting onto the podium and that is the target this weekend. I’ve taken plenty of podium finishes before, and I want to get back up there as soon as possible.”

Rick Parfitt, #62 EXCELR8 with TradePriceCars.com Hyundai i30 Fastback N, said:
“Although I have raced at Brands Hatch a lot in the past, it has always been on the Grand Prix circuit so the Indy layout is going to be new to me this weekend. I did have a brief test before the season started, but the car was still very new to me then and I’ve been able to learn a lot in the time since – even though there is still lots more learning to do!

“Hopefully I can put some of the knowledge I’ve gained from the first two rounds into practice this weekend, and the main target has to be to get as much as I can out of the tyres in qualifying to get a bit higher up the grid. My race pace has been improving all the time, so a better showing in qualifying will give me the chance to try and fight for some stronger results.

“The weather conditions look like they could be a bit mixed this weekend but if it’s wet, that would be great for me as I love racing in the rain. As far as I’m concerned, the wetter the better.”

Tom Ingram, #80 Ginsters EXCELR8 with TradePriceCars.com Hyundai i30 Fastback N, said:
“Snetterton as a weekend confirmed what we knew we were capable of, and I’m heading to Brands Hatch confident that we can go well again. Obviously we now have to carry a little bit more weight on the car which could have an impact in qualifying and race one, but it’s all about maximising the points across all three races and we know that we have the pace in the car.

“When we tested at Brands before the season started, the lap times we did were very competitive and that was with some weight on the car. We’ve worked hard to improve it a since then, and I feel we are in really good shape

“I’ve been on pole and have won around Brands Hatch Indy in the past and just have to focus on the job at hand. No matter if it is wet or dry, I think we’ll be right in the thick of it and I see no reason why we can’t have another strong weekend.”

Jack Butel, #96 EXCELR8 with TradePriceCars.com Hyundai i30 Fastback N, said:
“I’ve already had chance to drive the Hyundai at Brands Hatch before the season started, so we have a good base set-up to take into the weekend. We’ve also improved the car a lot since then, and I’m certainly feeling much more comfortable behind the wheel, so I feel like we could be on for a good weekend.

“From race two onwards at Snetterton, I was able to learn a lot more about the car, which gives me a better understanding about how to get the most out of it. I think that will help when it comes to qualifying on Saturday and that session is going to be key this weekend, particularly around such a short circuit where the times are so close.

“We should have qualified higher than we did last time out, and if we can get towards the top 20 this time around then it should set us up for a solid race day. I’m hopeful of being able to challenge for my first points finish of the season.”

Justina Williams, team owner, said:
“Snetterton was a fantastic weekend for us as a team and will live long in the memory, but now we need to put that memory to one side and focus on the job ahead. Brands Hatch Indy is a very different circuit to Snetterton, but it’s one where we should go well, and the fact that all four drivers were able to test there before the season started is also a positive.

“Having shown that we can win in the BTCC, our goal this weekend has to be to fight for victory once again but we know that it won’t be easy as the field will be so close around such a short lap. We’re pleased with the way all four drivers have performed so far this season, and hopefully they can all come away from round three with some strong results to their name.”