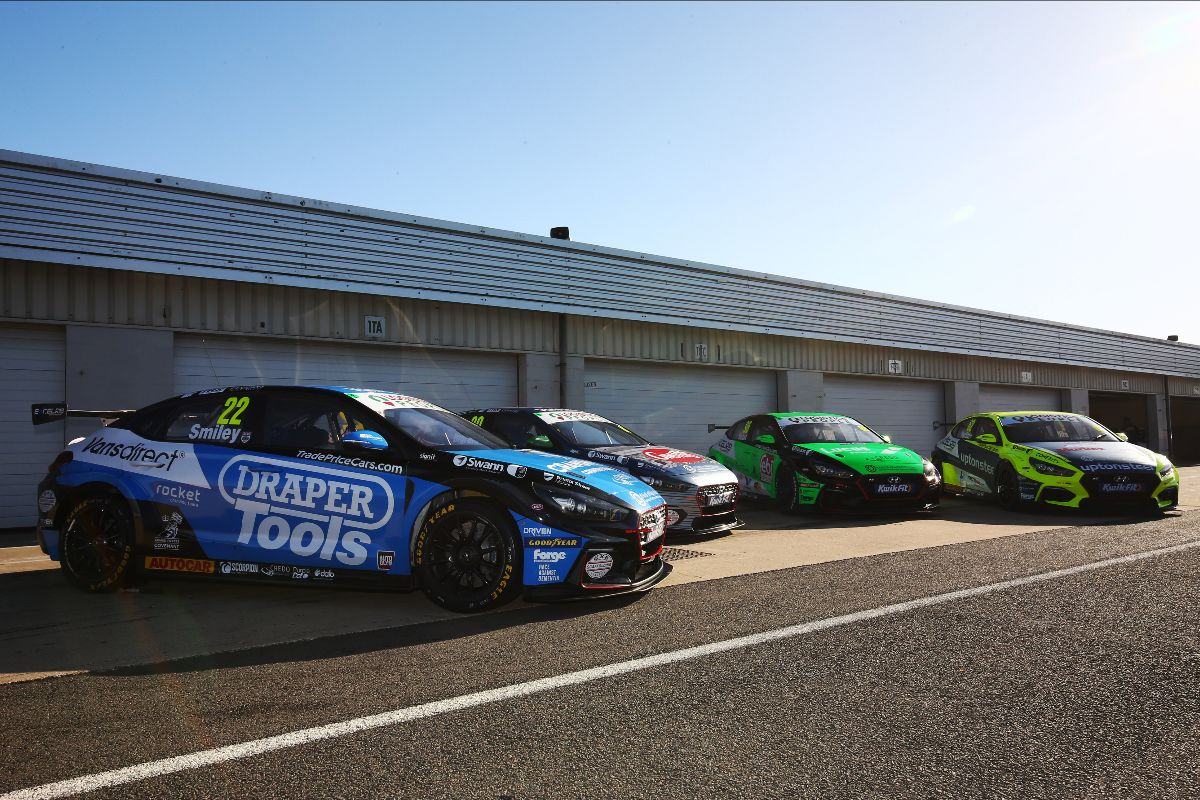 The EXCELR8 with TradePriceCars.com team heads for Silverstone this weekend looking to maintain its bid for success as the Kwik Fit British Touring Car Championship season continues to race towards the final stages.

The Suffolk-based team goes direct from Croft in North Yorkshire to the Home of British Motorsport for the second of back-to-back race meetings, with the Hyundai outfit reverting to its regular four-strong driver line-up for round eight of the 2021 campaign.

Tom Ingram continues to lead the team’s title challenge on the back of two top four finishes last time out, with the former Independents’ champion sitting just 37 points away from the championship lead going into the final nine races of the year.

Although he slipped from second to fifth in the points last weekend, the silver lining is that Tom – who was fourth fastest in the Silverstone group test back in April – will now carry less success ballast heading to a circuit where he has won more times than anywhere else on the BTCC schedule.

Five of his 19 career wins have come at the famous Northamptonshire venue, with only a puncture last season preventing him from adding a sixth to that tally. As a result, he heads into the weekend confident about challenging for what would be a fourth victory of the year to keep the pressure on in the title race.

Northern Irish racer Chris Smiley has also stood on the Silverstone podium in the past, and returns this weekend targeting his first top three finish of the campaign.

Chris has been a consistent figure in the points scoring positions throughout his second season in the i30 Fastback N and will benefit from the fact that he goes into the weekend without any additional success ballast on his car.

Having almost surpassed his points tally for the 2020 season, Chris will be seeking to make up ground in the overall championship standings whilst also retaining a top ten slot in the Independents’ Trophy.

Jersey racer Jack Butel missed out on adding to his points tally at Croft, but heads for Silverstone in positive mood as he looks to regain a top three position in the Jack Sears Trophy for drivers without an overall podium finish.

Jack scored his best qualifying result in the series to date and picked up three top 20 finishes in 2020, but returns this season in much stronger shape after a solid first year in EXCELR8 colours.

Having scored three overall points finishes so far in the Hyundai, Jack will look to build on his ever-improving pace to try fight well inside the top twenty during the weekend ahead, with his aim being to overturn the eleven point deficit to third-placed Carl Boardley in the Jack Sears standings.

After sitting out the Croft meeting on medical grounds to rest a back injury, Rick Parfitt returns to action this weekend looking to build on a solid performance on his last outing in the series at Thruxton in late August.

Scoring a brace of top 20 finishes, Rick produced the most competitive weekend of his BTCC career to date and showed top ten pace in the final race – an indication of the continued progress being made in his first season racing a front-wheel drive touring car.

Rick – a member of the prestigious British Racing Drivers Club – has enjoyed race-winning success at Silverstone whilst racing in the British GT Championship and will look to build on his performance at Thruxton to challenge for a breakthrough points finish.

This weekend will see a return of the top ten shootout qualifying format that was used at Snetterton earlier in the season, with 25 minutes of running deciding positions 11-29 on the grid, and a second ten minute session seeing the ten fastest drivers from Q1 doing battle for pole.

Chris Smiley, #22 Ginsters EXCELR8 with TradePriceCars.com Hyundai i30 Fastback N, said:
“Silverstone is a track where I’ve gone well previously and I’m going there in confident mood. We aren’t going to be carrying any extra weight in the car which gives us a good chance to being near the front in qualifying, and then pushing for some strong results in the races.

“We’ve changed the car quite a bit since we were at Silverstone for the season launch and it will be interesting to compare just how much it has improved since then.

“We’ve shown all season that we have the pace to be near the front of the grid but luck hasn’t always been on my side, and I’m determined this weekend to try and score some big points and secure the results that our speed deserves.”

Rick Parfitt, #62 EXCELR8 with TradePriceCars.com Hyundai i30 Fastback N, said:
“Although it was the right decision to sit Croft out to rest my back, I love entertaining people and after a weekend of being entertained myself, I’m looking forward to getting back on track and being part of the show again at Silverstone.

“As a member of the BRDC, racing at Silverstone is always special, and I’ve enjoyed plenty of success there in the past in GTs. Racing the touring car will be a different experience, but I’m returning this weekend having learned a huge amount compared to when were there for the season launch earlier in the year.

“On the back of a strong outing at Thruxton when I was last in the car, I’m feeling really confident about the weekend and will be pushing hard to get into that top 20, and ultimately fight for some points.”

Tom Ingram, #80 Ginsters EXCELR8 with TradePriceCars.com Hyundai i30 Fastback N, said:
“Although we dropped a few places in the standings at Croft, I think that is a bit of a blessing in disguise going into this weekend because of the fact we are now carrying less weight than we have done for most of the season.

“It’s so close in the points that we are only eight points away from the second place we held going into the last round, but we’re now 27kg lighter – and that could make a big difference in qualifying and race one.

“My plan for Silverstone is very much to go on the attack, and having enjoyed such a good record there in recent years, I’m fired up for another strong weekend to keep the pressure on in the standings.”

Jack Butel, #96 EXCELR8 with TradePriceCars.com Hyundai i30 Fastback N, said:
“Croft was a challenging weekend but I’m putting that behind me now and looking forward to getting straight back on track at Silverstone. Last season, I scored my best result in qualifying with 20th on the times, and then managed to finish in the top twenty in every race so I’m hopeful of another strong showing this time around.

“We’ve made huge progress with the car since we were at Silverstone back in April for the media day, and I’m certainly going there with a better package underneath me than I had last year.

“I’m hoping that this weekend we’ll have good pace and will be able to repeat the kind of results I scored at both Knockhill and Thruxton. Points, and maybe another Jack Sears Trophy, have got to be the aim.”

Justina Williams, team owner, said:
“When we hit the track for the first time as a four-car team at Silverstone back in April, we felt confident we were on track for a strong season and that has certainly proved to be true as we now prepare to return for the latest rounds of the season.

“With three rounds to go, we know that strong results are going to be vital from a championship point of view, and we go to Silverstone feeling confident about a successful weekend on track.

“Both Tom and Chris should be right up towards the sharp end, and with Jack and Rick having improved a huge amount over the course of the season, there is no reason why this can’t be the weekend that we have all four cars in the points for the first time.”